I checked into a motel last night to avoid thunderstorms. None occurred.

My ride today involved following a rail trail 70 miles to a place called Fergus Falls. Shut brain off, pedal, and be grateful for defunct railroads and favorable winds. (Something like 6 of the last 8 days have had favorable winds. I fear I’ll pay for this.) 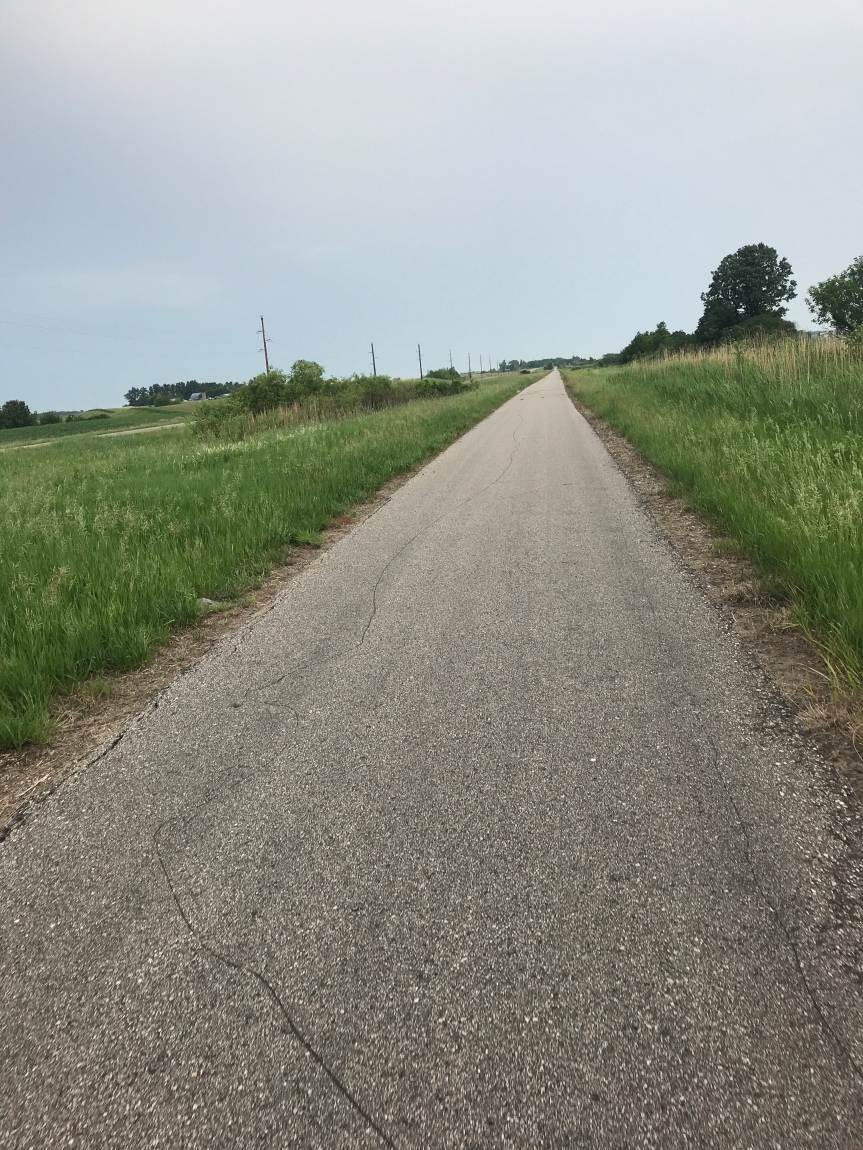 Before riding the trail I took a short tour of Sauk Centre. There’s the Palmer House Hotel and a bunch of old buildings from the 20s. I’ll bet it was a hopping town way back when.

The trail goes straight to the northwest. Ahead the sky was dark. I could tell that I was going to get wet but I was more concerned about wind and lightning. In West Union I noticed a gazebo next to the trail. Possible shelter, I rode on. Another gazebo. I rode on. No more gazebos and here comes the rain.

I turned around and made for the last gazebo. Just after I got there a young woman with a 4 year old ran in behind me. Then the skies opened up.

Ten minutes later the storm had passed. Had I left the hotel five minutes earlier I’d have been caught in it. I can’t help it if I’m lucky. 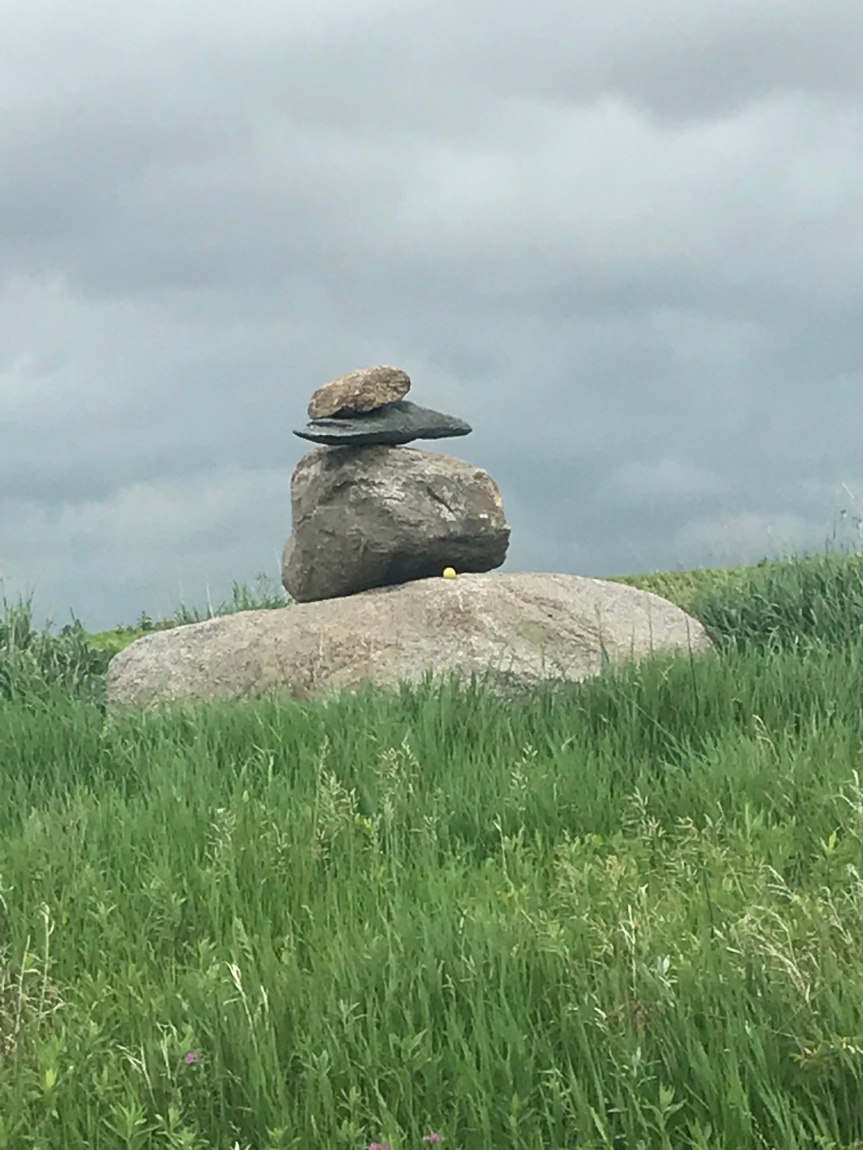 The statue commemorates the finding by a local farmer in the late 19th century of ancient Viking artifacts including a rune stone. This material is believed to be from the 14th century well before Columbus’s voyage. I’m skeptical. But the town isn’t so they built Big Ole.

As the heat and humidity climbed I looked for a cafe to cool off. I found a coffee and ice cream shop in one.

Cone devoured, I was back on the trail for only 6 miles when I saw a steakhouse in Evansville.

The service was slow but the fried walleye sandwich was worth the wait. 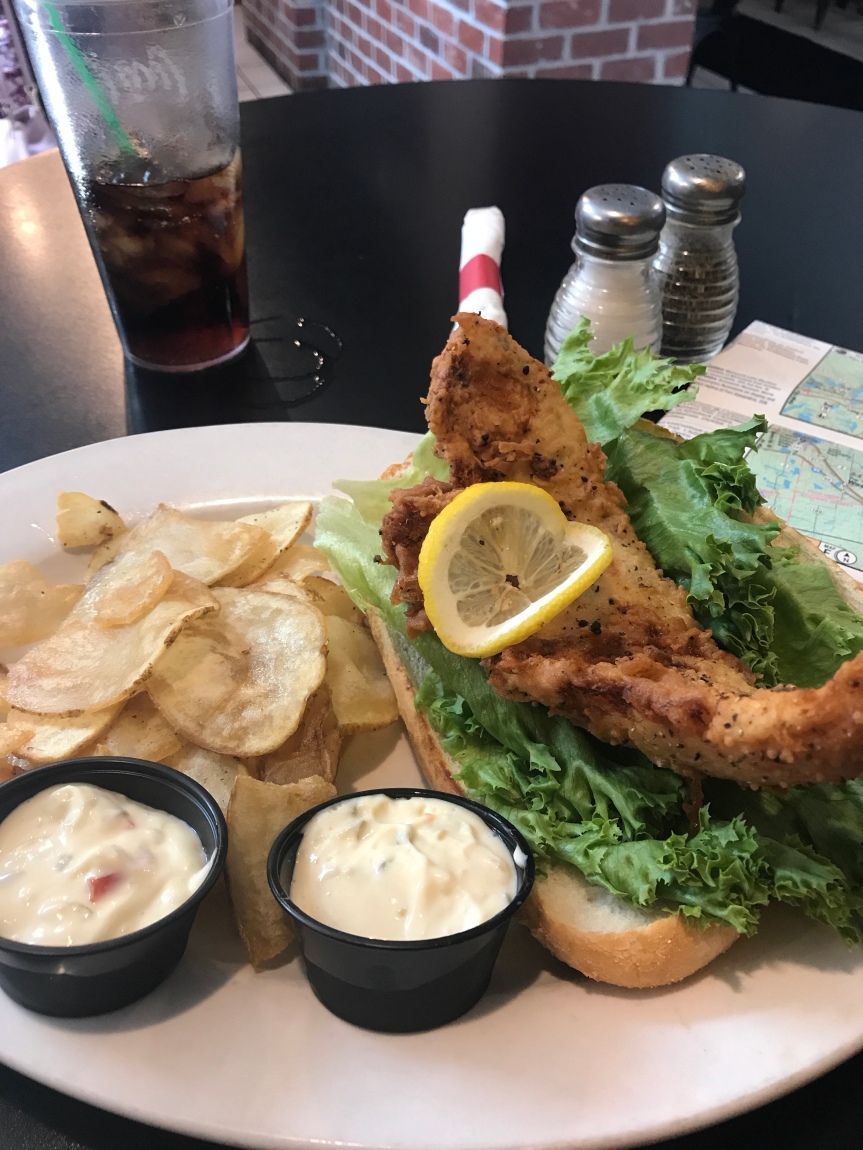 A big storm was forecasted to hit Fergus Falls do I had to up my pace. Earlier in the day I had to deal with a trail closure by portaging The Mule over 40 yards of dirt and mud. A few miles from Evansville I got another muddy trail interruption. I slogged through annoyed that I’d have to clear the mud out of my fenders.

Near Dalton, the penultimate town on today’s ride, I encountered Aaron, who is riding from Portland Oregon to Bar Harbor. Maine. We stood and talked for about a half hour, long enough to feed every biting insect around.

With severe thunderstorms nearly certain for the overnight and a tornado watch in effect, I headed for yet another hotel.