Way back in Missouri I met Rob and Fay on their way from Santa Monica to Chicago on Route 66z we hit it off and they invited me to stay at their place if I’d decided to finish my ride in Sacramento or San Francisco. 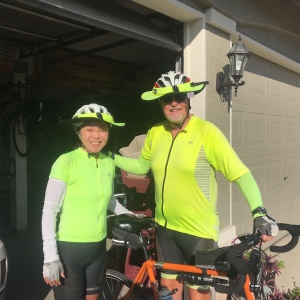 As things worked out, I ended up riding through Sacramento. Despite the fact that I arrived a day early and that they had plans for the night, they opened their home to me. Before they left for a night out at the football (soccer) pitch, they left me with a warm pasta casserole, instructions to eat or drink anything else to my liking, a huge TV, and a swimming pool.

I never made it to the pool because one of their comfy chairs knocked me out. I woke up 90 minutes later totally disoriented. Before and after my slumber I drank about six pints of cold, cold water from the fridge. (94 miles of riding makes for a powerful thirst.

We chatted a bit after they came home and again over the breakfast they made me. Then thru gave me a rolling escort back up to the Western Express Route. We then rode the fantastic bike trail along the American River into Old Town Sacramento, and ultimately over the Tower Bridge into West Sacramento. It was about 27 miles in all. What terrific hosts! 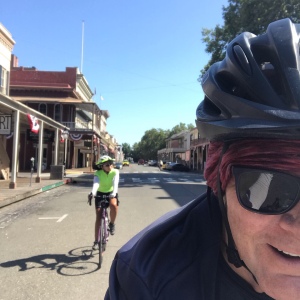 I continued heading west on the causeway over farm fields along I-80.

Then after a few miles of suburban roads I entered Davis. I remember coming to Davis in 1979 and marveling at how the community embraced cycling. Today, as I was taking a left turn a white SUV pulled up along my right hand side. I had missed the fact that the left turn had two lanes. The driver Roth window open started yammering at me to learn the rules of the road. She could have said something constructive like “You need to be in the right lane”, but she chose to be an asshole.

So I chose to tell her to fuck off.

This happened as we were moving in traffic.

After she passed me, I signaled and moved over. Oddly the driver behind Miss Bossypants had no trouble comprehending my maneuver.

There was a criterium going on in town. I saw it as an impediment between me and lunch.

A couple of passers by chatted with me, apologized for the driver’s rudeness, and explained how to get to a good restaurant along the race course. This being a holiday the placed was packed. Many of the tables had whiny kids. The line go order food was out the door. I left.

After another five miles I spotted a Subway and hoovered a foot long.

The trail west of Davis was designed for me; it was riddled with bumps from tree roots. Where’s my axe when I need it?

Soon I was back on two lane country roads they actually went up and down a bit. Show me what you got, Yolo County.

I rolled through orchards if fruit trees, past farm fields, and along a Putah Creek. 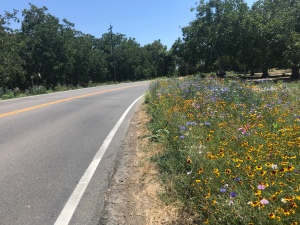 Near Winters the creek was filled with families having fun with tubes and other water toys.

I stopped in Winters for GatorAde and an Its It, which is the closest food you can get to Meth.

From Winters I did more easy climbing and rode past Vacaville, known mostly for its hospital for the criminally insane. I didn’t have to deal with any loonies running loose but I did see a wild turkey run across the road in front of me.

Could it be that the turkey was a human escapee and that something in god water is making me go mad?

From Vacaville it was a short spin to Fairfield. The afternoon heat and 75 miles of riding convinced me to find a motel. And do I did.

I pulled a Joe Walsh and washed everything I own except my shoes in the bathroom sink. Tomorrow’s 2-hour ride to the ferry terminal in Vallejo could be a tad moist.

One thought on “No Name Tour: Day 50 – Gems in the Breakdown Lane”