Skip to content
I woke up at 5:30. Actually my bladder woke up at 5:30. My brain was still asleep. It was a fierce fight for anatomical dominance but my bladder won.  My trip to the end of the driveway was invigorating. Not because of my bladder. It was in the 20s and the wind was blowing.  Maybe I should get wind resistant jammies. I briefly considered driving to work, but then I thought, “Why not freeze my noo noos off instead?”  And so I rode Big Nellie into the frigid morning.
Despite the big fairing on the front of Big Nellie, I was having quite a rough time getting any speed going.  I hit the hill on Park Terrace Drive going only about 10 miles per hour.  In a few seconds, I was doing 32 and ducking behind the fairing to preserve the flesh around my eyes.  Tears were shed involuntarily. Dang.
Onto the Mount Vernon Trail without a stop to cross the Parkway. Ithink I will call this maneuver “Pulling a Moses.” How nice of people to provide a gap in traffic. The Dyke Marsh boardwalk was free of rime, too, so things were going swimmingly.
I didn’t blog about my ride yesterday but it was notable for two wildlife sightings. Along the river near Dyke Marsh a tree was absolutely filled with red winged blackbirds. They were making the trilling sound that reminds me so much of my days as a kid playing in and around Dead Man’s Pond.  (Sounds a bit like something Luke Skywalker would say, no?) Sadly, the pond was filled in by developers long ago. When I got to the northern side of Belle Haven Park, I spotted a bald eagle about 200 feet up in the air flying from the river across the trail toward the Beltway/US1 mixing bowl.
Yesterday’s flashback was provided so that I could place today’s wildlife sighting in context. As usual, I was hoping to spot a bald eagle in the Belle Haven nest.  Instead, I spotted one about 30-50 feet high gliding straight toward me over the trail.  All I could think of was, “It would suck to be a mouse right now.” Just before getting to me, the eagle flapped its wings, turned and gained altitude as it headed for the nest. Double dang.
I slogged into the headwind through Old Town. The beaver dam is starting to get built up again. I wonder if this isn’t the work of the National Park Service official beaver dam disrupter or just a very stubborn beaver. The water level is almost up to the trail again so I suspect the disruptor will be back soon. Damn. (So to speak.)
The rest of the ride in was work. As usual, once I cleared the airport, I had nothing to block the headwind. The bike seemed unusually sluggish. On the way home I learned that my front fender was dragging on the side of my front tire. I must have been really sleepy this morning because I didn’t hear it rubbing even with the fairing to amplify the sound. Once I freed the tire, I could enjoy the tailwind all the way home.
And so I completed my 30th bike commute of 2013.  Normally I don’t hit 30 until sometime in March. Tomorrow I am driving in. The forecast is calling for afternoon snow showers and a wintry mix for the evening rush. Not gonna happen on two wheels.

The fam and I went to Rocky and Chelli’s house in North Arlington to watch the Puppy Bowl last night. Some fool put on a football game that lasted until 11. We ate too much and drank some ourselves some beers. Still crazy after all these years. Wait, no. Oh, nevermind. The point is we didn’t get home until 11:30.

After 5 1/2 hours of sleep I was awake.  I decided to take my daughter’s car in for service since it had a flat-ish front tire. So I put Little Nellie in the trunk and drove to the mechanic. I pulled Little Nellie out of the trunk and the pedals wouldn’t turn. I should know better but I pushed on the pedals a couple of times in the hopes of freeing things up. No such luck. I looked down and saw the rear shifter cable looped over the left crank arm.

I unlooped the cable but now the cable was all stretched. I played with it and my 2-cent mechanical skills allowed me a full 10 gears to ride to work with. That ought to be enough, thought I, and off I went.  I was a little underdressed for the 28 degree weather but I warmed up soon enough. The ride in was pretty uneventful. I passed Bob Cannon (@rcannon100) on the MVT as he was heading south and I was heading north. He didn’t notice me. I am so inconspicuos on my clown bike.

I survived the Rosslyn Circle of Doom and an entire d 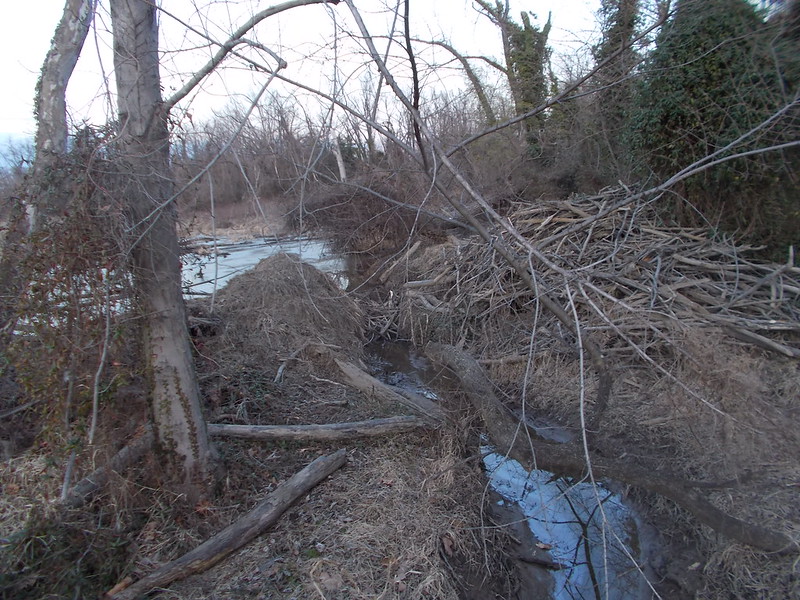 ay smashing words and numbers into littler words and numbers. Just before 5 I headed home. It was LIGHT OUT!!!!! I didn’t bother to turn my headlight on until I was in Old Town. On the way there I stopped to check out the cut in the beaver dam north of Slaters Lane. The National Park Service has a crack Beaver Dam Demolition Team. They come and breach the dam whenever it gets high enough to cause flooding near the trail and the adjacent playing fields. Beaver Dam Demolition is a full time job. The NPS-BDDT is out there working every week.  You can see the beavers sitting off to the side flipping them the beaver bird.

I didn’t have to pick up the car. Mrs. Rootchopper picked up our daughter and they did it for me. The mechanic couldn’t find a leak but strangely he charged us for plugging it. Which I suppose is fair because the last time he fixed an actual leak, he fixed it for free. I think I may have to find a mechanic located outside of the Twilight Zone.

In the last half mile before home, snowflakes began to swirl around me.  The new name for these don’t-amount-to-anything snows we are having is “conversational snow”.  If this one gets chatty, I may have to drive tomorrow.