It turns out that Terri, my Warmshowers hostess, is my sister from another mother. She’s crazy about Brandi Carlile and loves everything bagels. We talked about the former last night and I had the latter for breakfast in her kitchen this morning. I lingered a long time, first chatting with Terri then with Drew, Scott, and Poppy.

I rolled out well after 8 and headed to the post office to mail back some maps. 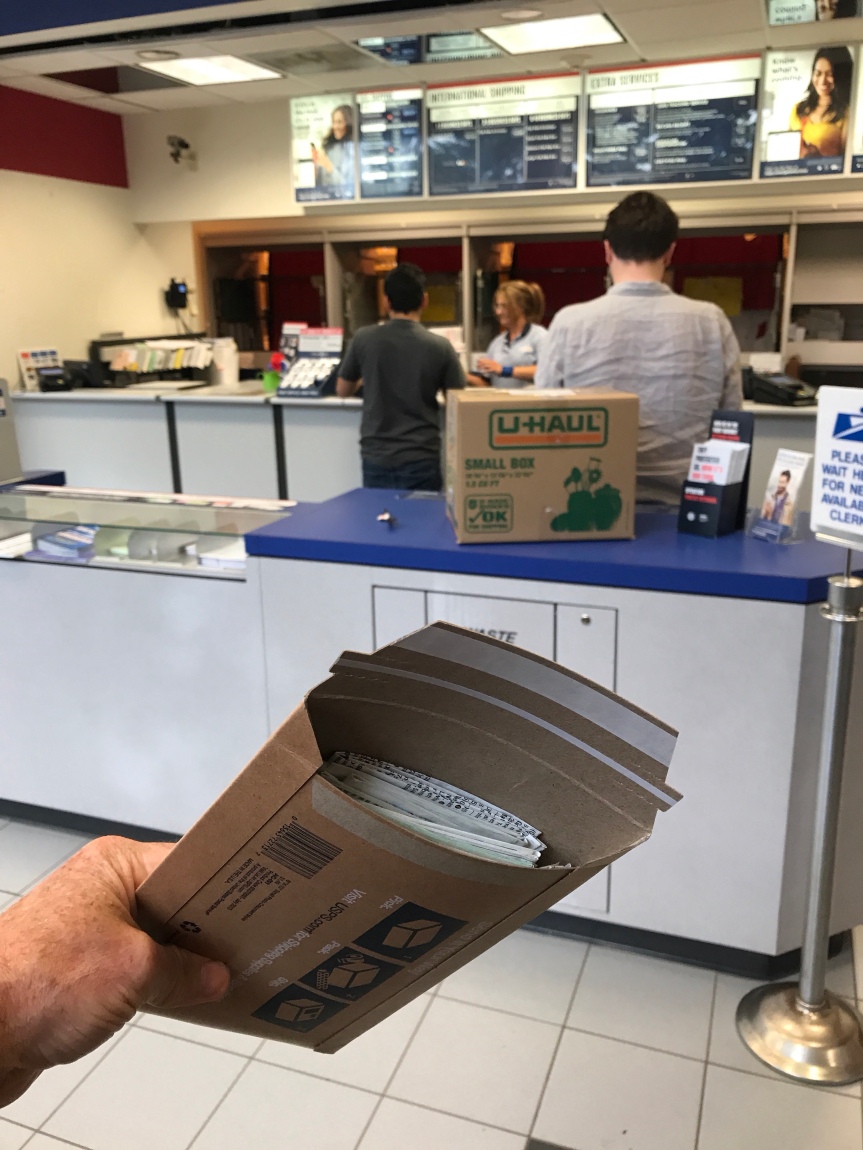 Then I ride across the Red River of the North into Fargo. I was expecting a run down place with weathered buildings but I was pleasantly surprised. All the old buildings look like new. Flower baskets hang from street light poles. Trees and greenery abound. I even got stuck waiting for s couple of trains on my meander.

I am embarrassed that I didn’t recognize that the colorful bike racks below spell “Fargo” in ASL. 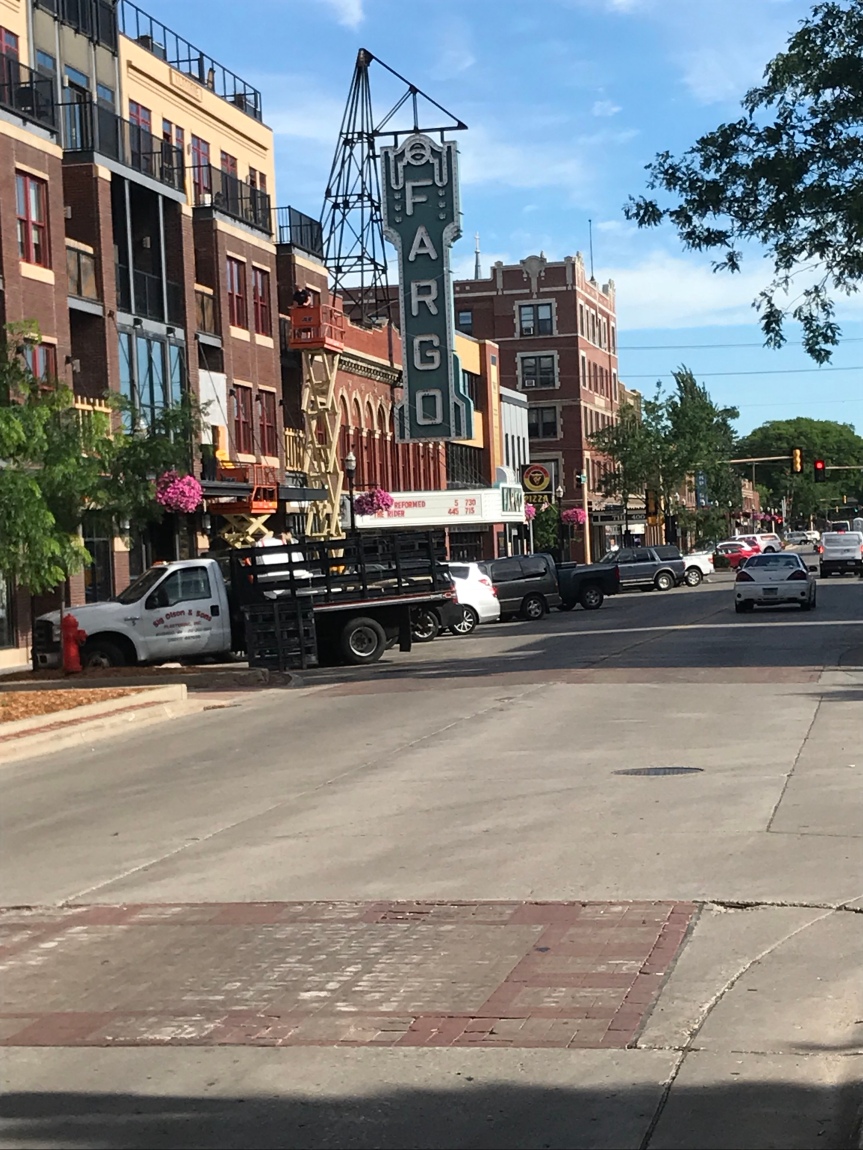 I headed south out of town with a nice tailwind and turned west near Horace. Drew told me that the big crops around here are barley (for beer) and sugar beets.

This is what I saw for the rest of the day.

I met Tim on the side of the road outside Kindred. He’s riding the Northern Tier in chunks because he’s otherwise busy running a couple of businesses in Sandpoint Idaho. He gave me lots of information about the roads out his way and invited me to stay at his place in Hope Idaho later in my tour.

Tim and I talked for a half hour. I rode into Kindred and had a noontime breakfast at the cafe he recommended.

The high plains are known for their abandoned buildings. This one caught my eye from the highway so I rode down a dirt road to get a better look. 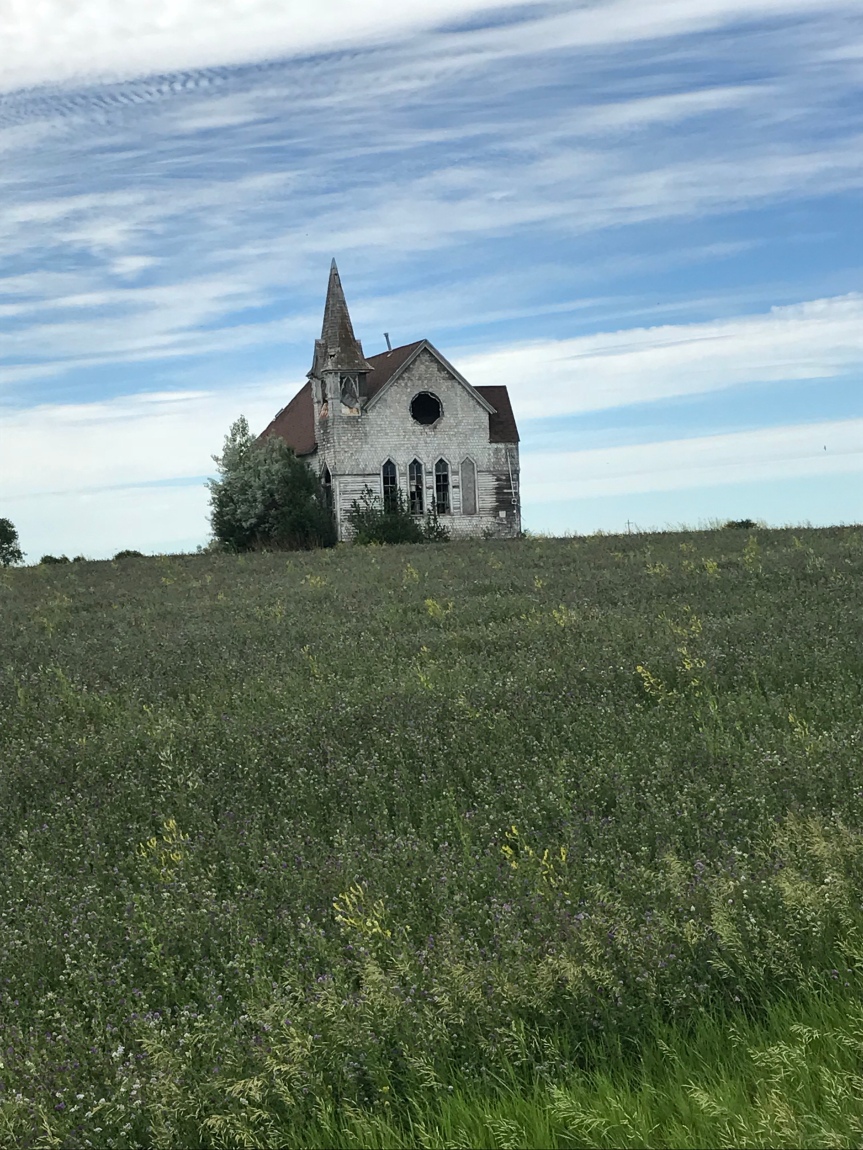 The route took me straight west for miles and miles. The wind was pushing me along at 14 miles per hour.

Along the side of the road I saw a wild turkey just hanging out. Wildlife is random out here.

At Enderlin I stopped for a late lunch. The cafe was also a thrift shop. I had a hot roast beef sandwich that filled my tummy.

After my meal I stocked up on water and food at a gas station convenience store. My maps said there were limited services for the next 78 miles. (Mostly this meant there were no toilets.) I arrived at Little Yellowstone Park, a roadside state-run campground, around 4:30. It was clean and empty. I decided that I’d do something a little crazy. I was going to run the deck of the rest of those 78 miles!

First I had to climb a big hill in my granny gear. On the way up I startled a doe and she dashed from the tall grass along the side of the road. Ten yards later I spotted a fawn nestled in the grass checking me out.

Five miles later I came upon Emily and Jay who were riding Bruce Gordon bicycles from Bend Oregon to Boston. (Crazyguyonabike.com/doc/bend2boston) 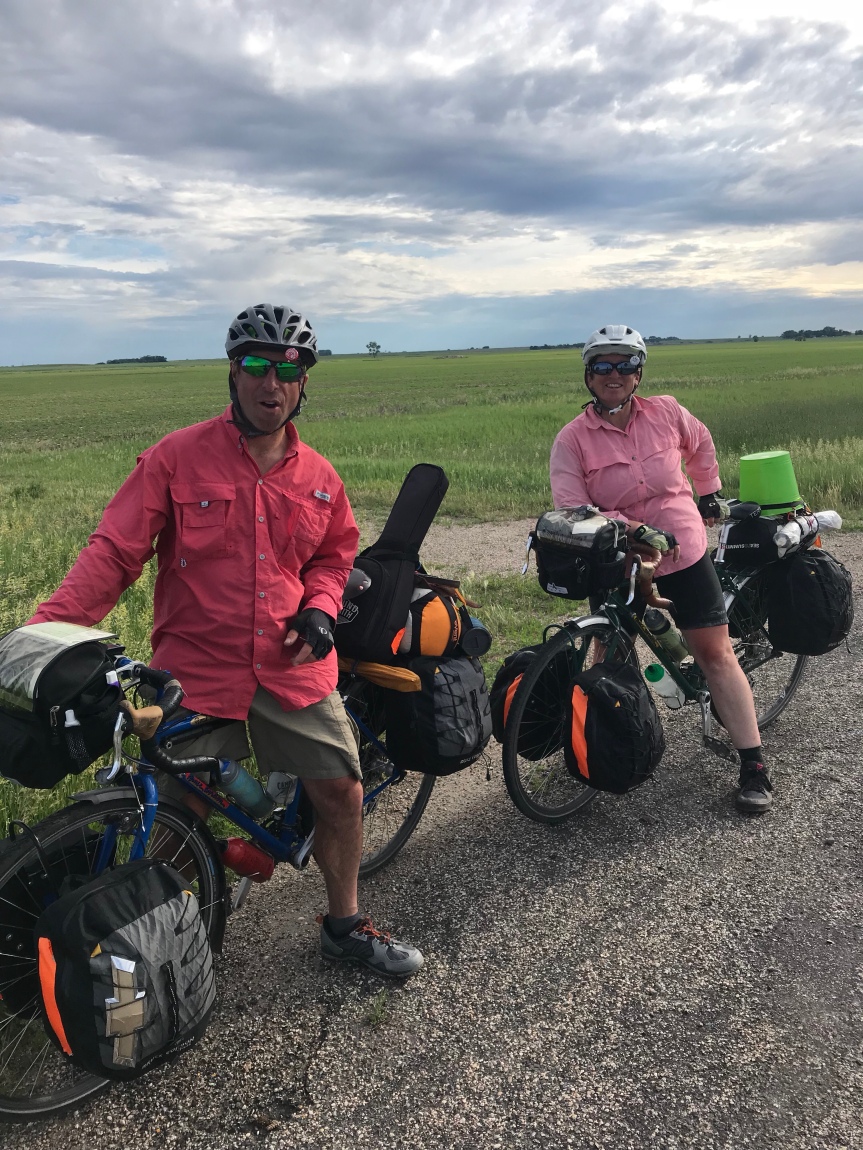 We talked for 20 minutes or so before parting. They had stayed the night before at the Honey Pot in Gackle. That was my destination. I expected to get there no later than 10.

Then the winds died. No tailwind. I just rode and admired the sound of the noisy critters on the prairie. Just before sunset they get LOUD. The birds made R2D2 sounds. There was one in particular with an orange head and splashed of white on its shoulders that stood out both visually and aurally.

Each time I stopped I was engulfed by swarms of mosquitoes. These and other flying bugs would get caught in the sunscreen and hair on my arms and legs . Emily had talked about ticks so I was clearing off the bugs constantly. Their distraction was slowing me to 9 miles per hour. I finally put on my sunsleeves and a hat for sanity sake.

The sun set to the north peeking through overcast skies.

Now it was dark. I toyed with the idea of riding without lights. The heavy truck traffic from the workaday world had ended and I was all but alone. I’d turn my lights on whenever I heard a car coming from behind or saw headlights up ahead. The headlights seemed to take forever to get to me.

After a while I just left my lights on. My ability to sense my environment was now confined to the white circle of my headlight beam. I could have been anywhere for all I could tell. Now and then I’d see a farmhouse’s lights in the far distance but that was all.

I was eating constantly but I was slowing down. I was riding uphill but could only tell when my pedaling became labored.

Then came the rain. It was light but added to the lunacy of the whole affair.

At one point I nearly ran over an owl who was sitting in the road admiring his dinner.

This was getting weirder by the mile. Because of the rolling terrain I didn’t see Gackle until the last half mile into town.

I arrived at the Honey Pot just after midnight. I woke up Martin, a Swiss cyclist bound for Seattle. He returned the favor by waking me in the morning.

Earlier in the day I learned that Tom Gjelten of NPR had begun a 70th birthday ride from the Oregon coast to Massachusetts. Around our house, Tom is known as Jake’s stepdad. Jake and our son went to high school together. I hope to see him in a couple of weeks.