I took the day off from work, my second four-day weekend in a row. I decided to get some things done rather than goof off. I started out by sleeping in. Considering how much trouble I have been having sleeping these last few weeks, this was actually an accomplishment. My first task of the day was to go through my closet and pull out all the clothing that I haven’t worn in over a year. I filled a tall kitchen garbage bag.

One of the upgrades I bought when I ordered Little Nellie from Bike Friday was a Chris King headset. The other morning the handlebars would barely turn. So off I drove Little Nellie to Spokes Etc., my local bike shop, in the Belle View shopping center. As I walked the bike into the store it was clear that the steering mechanism was catching. It would not smoothly turn left or right or even go straight. Chris the mechanic said that it was kaput. I called Bike Friday and they said the headset had a 12-year warranty. My bike is seven years old so it looks like I’m in luck. So on Monday I need to call Bike Friday when they have service people in the shop to arrange for a replacement.

Next up, I dropped the bag in a Goodwill collection box.

Then it was off to the barbershop to get rid of my Professor Irwin Corey look. Then I hit the bank. Well, let’s rephrase that. I went to the bank.

After that I took Big Nellie out for a ride. The other day I tried the orthotics on Big Nellie and they really messed up my feet. Today, I used the insoles that came with my shoes and had no problems. So my conclusion is that for weight bearing activities the orthotics are great, for other applications, not so much. I know I am jinxing myself by saying this but these orthotics are really doing wonders for my back. No twinges. No aches. So 2015 is off to a good start.

I rode my bike around the Fort Hunt neighborhood, then down to Mount Vernon on the Mount Vernon Trail. Then I rode beyond Mount Vernon in an area I think is called Woodlawn. Whatever it is called it has miles and miles of lightly traveled suburban streets. It’s a good place to ride for riding’s sake. Along the way I was this: 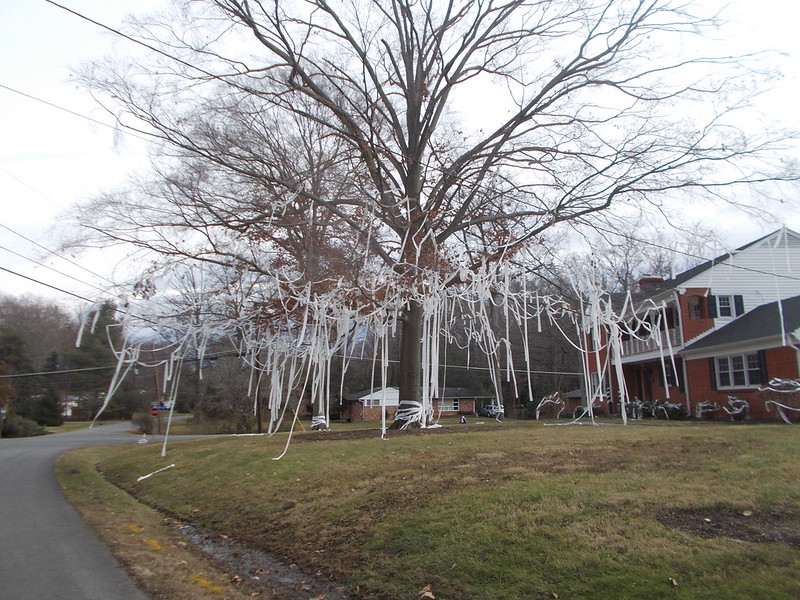 I’d say it was the work of professionals. I’d love to see the look on the homeowner’s face when he sees this.

After nearly 25 miles I called the day a success.