I woked up and went out to get the newspaper. It was cold outside, windy too. This was going to be one of those challenging bike commutes that I will tell my grandkids about. Unless, of course, my grandkids could give a damn, which they won’t.

I emptied the closet and put whatever wasn’t alive on. Working from the top down I wore a helmet, balaclava, buff, waterproof shell, the holey sweater, a t-shirt, a base layer, Smartwool arm warmers, glove liners, mittens, wicking briefs, tights, windproof pants, wool socks, shoes and over boots. I looked like Charlie Brown. I could barely move. Off to the office I went aboard Little Nellie. Little Nellie has a nice big fairing that I hoped would keep the wind off my torso.

A mile into the ride I heard a squirrel making a racket. If squirrels are pissed, you know it’s cold. The ride in was cold but there was a headwind. i mean you can’t have too much climactic misery on a bike commute. I was fearing the chill on the Park Terrace downhill which I normally take at 34 miles per hour. Today, the headwind held me to 29, a mixed blessing because the wind chill at 34 might have done me in.

I stopped on the Dyke Marsh boardwalk, removed my mittens and gloves and took this picture of the sunrise: 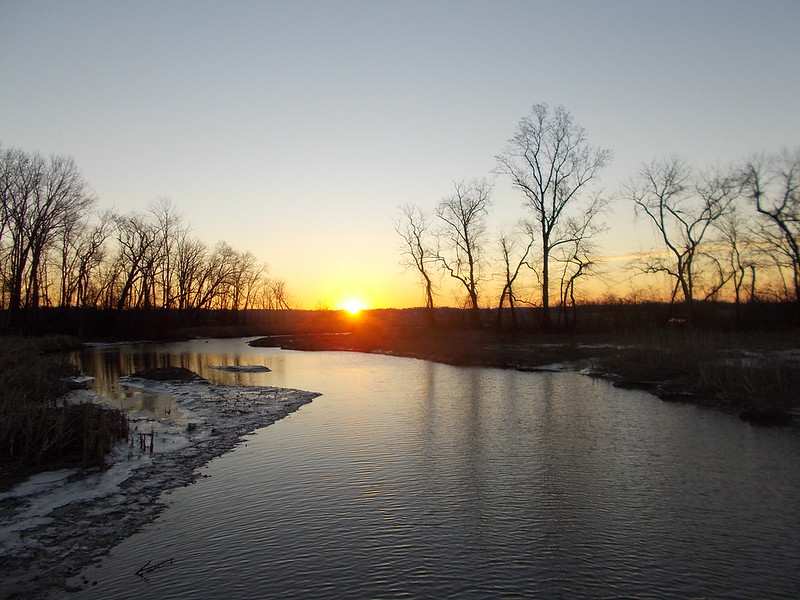 I hope you like it because I froze my ass off taking it.

The ride in was a bit lonely. Until I was north of Old Town, I was pretty much the only one out their on the Mount Vernon Trail. North of Old Town, the battle of the headwind really kicked in. A few bike commuters and a couple of hardy runners joined me in the bitter cold. The open areas near Daingerfield Island and north of National Airport were rough. I was making only 10 miles per hour, but I was surprisingly comfortable until the last 20 minutes. My big toes and finger tips were starting to freeze. The Canada geese were clustered in the Potomac. Hell, if Canada geese are cold you know it’s nasty outside. Under the TR bridge, less than a mile from work, a great blue heron hid at water’s edge in the growth on the riverbank. It was all fluffed up but it looked miserable with its right wing covering it’s head.

In the TR Island parking lot, I spotted a bike commuter whose bike was lying on its side. He was helping a motorist change a flat tire. Actually, he was doing all the work; the motorist was standing next to him in a winter coat looking helpless.

At the Rosslyn Circle of Death I paid forward a debt. Last week a panhanlder yelled at a car that was turning right on red without stopping from the I-66 off ramp on to North Lynn Street in the direction of Key Bridge. Today, I was waiting to cross the same intersection. A blonde woman pedestrian started ahead of me. She was wearing a long cloth coat, heavy leggings and tall black boots. I see her often at the same place. Today, she was looking down at her smartphone as she was about to step off the curb. Just before she arrived I watched three vehicles, two in the center lane, blow through the red light without stopping to make the right turn. Something told me to wait. Sure enough a fourth vehicle came up the ramp and, without so much as tapping its brakes, blew through the red light and took a right. I yelled “WAIT!” and the woman with the smartphone looked up froze. The car just missed her. As I rode past her she glanced at me. Her eyes said a silent “Thank you.” I have lost track of the number of times I have seen this happen at the exact same spot since i started working in Rosslyn 15 1/2 months ago. I simply cannot believe the Arlington police leave this intersection unattended.

The ride home was much nicer. It as just as cold but I had a tailwind. Hallelujah! Instead of slogging along at 10 miles per hour I was cruising easily at 15. Sunset is noticeable later now. I could ride all the way to Old Town without being blinded by car headlights. At the south end of Old Town, I continued on the Mount Vernon Trail to Jones Point Park. I had heard on Twitter today that a small wooden bridge on the MVT in the park was out so I rode past the traffic cones to check it out. The bridge is only 10 or 15 yards long but the near 5 yards was covered in plywood. I wonder if a car hadn’t try to drive over it.

I took the streets through the rest of Old Town and made my way back to the MVT. The rest of the ride was pleasant. Unfortunately, I now had to use my right hand to shade my eyes from the car headlights. When I got home I realized that this caused the tips of two of the fingers on my left hand to be mildly numb. Good thing I didn’t have too much riding left. Another problem was caused by gum balls. Gum trees are all over the place in Mount Vernon. Their seeds fall in little spikey balls the size of ping pong balls. Today’s gusty winds knocked hundreds of them out of the trees and onto the trail. I must have hit them all. My front and rear wheels were bouncing as if the gum balls were made of steel. I hope I still have air in my tires in the morning.

It’s supposed to be super cold and windy again. I plan on dressing like Linus. There’s nothing a blanket can’t cure.