Between oversleeping and a longish yoga session, I was out the door 30 minutes later than normal. I overslept because I took Vitamin I with a sedative before going  to sleep. I hope the I works as good as the zzzz.

The good part about my departure was that it was daylight. The bad part was that The Mule had a flat rear tire. Well, at least it didn’t go flat on me on the road.

My only option was Little Nellie, my Bike Friday. With its little wheels it’s a bit hard on the back. Given my recurring back woes, I wasn’t thrilled at the prospect of riding her. Of course, that didn’t stop me. I hopped on Little Nellie and took off for work.It was in the 40s, too warm for the holey sweater but too cool for shorts.

The ride in was uneventful. I saw a different set of people than usual, except for the Hoppy Runner. I normally pass him as he heads south but today I passed him heading north.  I was pleased to make it all the way to work without any significant stiffening in my back or hips. Taking 600 mgs of Vitamin I may have had something to do with that. 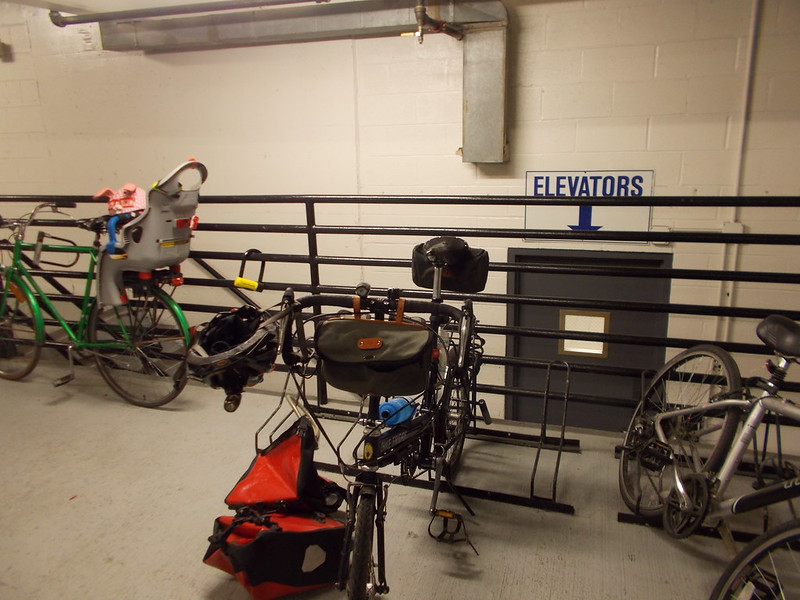 Throughout the work day I alternated between sitting at my desk and standing. I spent much of the day reading a document about the Internet in 2025.  One of the experts cited was Bob “Don’t Call Me Rachel” Cannon. It never ceases to amaze me that so many people I know are experts. Somehow we got put in charge. Yikes. Does this mean I have to grow up?

The ride home was pretty damned awesome. 70 degrees!!!!  The Mount Vernon Trail was pretty crowded. Nearly everyone was well behaved. One exception was this man, about 55 to 60 degrees who was walking south just past Gravelly Point park. As I rang my bell to pass him, he stopped turned and yelled at me. He did this last week too. I didn’t respond but I am wondering if this guy may be the same person who pushed a cyclist off his bike a few weeks ago.

I stopped on one of the flyover bridges at National Airport to shed some outerwear. Off came the jacket and the skull cap and the glove liners. It felt so good to feel the wind on my arms.

I must have had a tailwind. I was going 2 to 3 miles per hour faster than usual. I seemed to actually have my mechanics back after so many weeks of fighting with my back and hips. Yoga is making me much more comfortable on the bike, too.

Just south of Dyke Marsh I came upon a man standing next to the trail. He seemed to be buttoning up his dress shirt. He was ratty looking. I don’t often see homeless people this far south. He had gray hair and a messy short beard. It occurred to me that he vaguely resembled the sketch of this Alexandria homicide suspect. Except the suspect looks well groomed. The more I look at the sketch the more I think I’ve seen this person before. The twist in his lip and the eyes remind me of someone. Creepy.

A few hundred yards later, just before the Morningside nest,  I came up a large limb across the trail. I dismounted and started to remove it when another cyclist hopped off his bike and grabbed the opposite end. We had it off the trail in a matter of seconds. I later learned from Nancy “Two Sheds” Duley that the disheveled man had been spotted throwing debris onto the trail.

Speaking of the Morningside nest, I spotted a picture on a Flickr page from a local photographer. A bald eagle has returned to the nest. Soon breeding season will begin.

After arriving at home, I started to change to tire on The Mule. I could not find a leak. I pumped the tube up until it looked like an inner  tube but it wasn’t leaking. Maybe the valve is bad. I decided to put the tube back in the tire, remount it, and check again in the morning. Since it was so nice out, I did some maintenance work on Little Nellie, too.

Tomorrow is supposed to be another warm day. With thunder storms. March is tempermental.

Observation: I was pretty pleased that the new fair weather commuters were all well behaved today. No one buzzed me too closely. Except for the two loonies, people were smiling.