There is something not quite right about getting new car tires by bicycle but that’s what I did today. I put Little Nellie, my Bike Friday New World Tourist, in the trunk of my car and drove to the dealer in North Arlington. Normally, buying tires from a car dealer is dumb but I wanted the same tires that came on my car. And, the dealer cost was $1 more than the Firestone place near my house. Unlike my local Firestone place which screwed up an alignment the last time I went there, my dealer’s mechanics seem somewhat competent.

I took a picture of Little Nellie with my car. As you can see, I pulled into the gray 2009 Accord line. 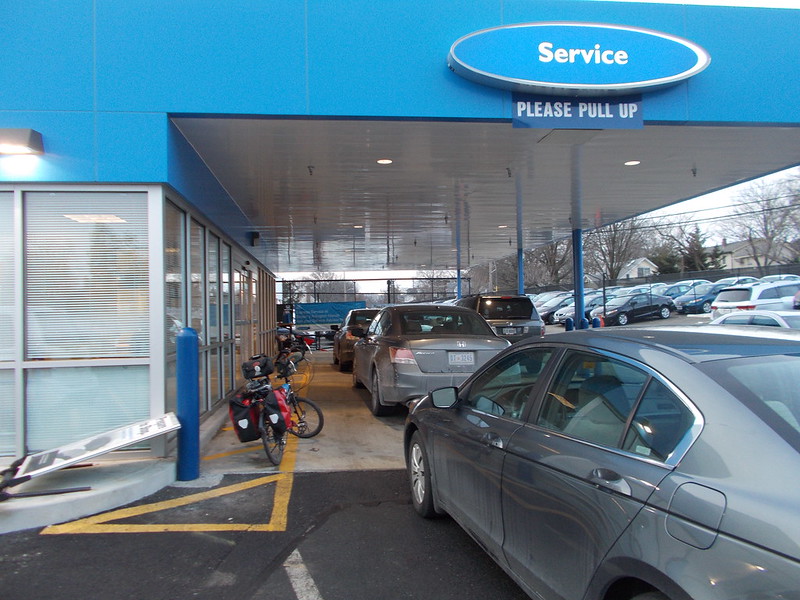 The service clerk asked if I wanted a ride to the Metro and I said, “No thanks. I’ll take my bike.” (Kinda has a nice ring to it, don’t it?)

And I was off. Somehow I managed to nearly get killed twice on the ride to work . My rear brake is not working properly. I rode Quincy Street (named after the TV pathologist) to the Martha Custis Trail.  It was a breezy ride to Rosslyn with some interesting swales in the surface of the trail where winter had been unkind. The little wheels on Little Nellie made them rather nauseating.

I got to work but neglected to take a documentation photo so I can’t count this one as a work errand. No worries, I’m riding to work tomorrow.

During the day, my Saturday bookstore errand was disallowed as a library trip but it still counts as a trip to a store other than a grocery store.

An update on my back: I have been dealing with nasty back problems for about a month. Lately they have migrated to my left hip and knee. I did some web surfing and found out that one side effect of back spasms can be hip bursitis. The treatment is ice and ibuprofen, neither of which I have been using. I took some Vitamin I and slapped some ice on my hip last night. This helped until the ibuprofen wore off at 2 a.m. I woke up for some more “I”.  Suffice it to say I was groggy when I woke up for my first daylight savings time workday of 2014.

I did another set of yoga exercises after awakening today. I can safely say after two weeks of yoga that I have little chance of playing Mr. Fantastic in the Fantastic Four reboot. I looked like a fish on deck trying to do the bow exercise: (1)  Lie on the floor face down. (2) Reach back and grab both ankles. (3) Draw ankles forward toward butt. (4)  Arch upper body up and back. (5) Hold.

After I sort of did the yoga routine, I read the “Thoughts for the Day” page in my yoga book. It was all about how housewives would be less miserable and get all the housework done by incorporating yoga into their daily lives. And they’d be all refreshed and invigorated when their husbands came home.

Category: Store that is not a grocery store

Observation: My dealer washes my car whenever he works on it. Wouldn’t it be cool if bike shops did the same with your bike?

One thought on “Errandonee #5: Car Repair by Bike”