The idea was to go to Meridian Hill Park to hang out with my friend Florencia. Trouble was that we were meeting at 3 and I had a day to kill.

I decided to go for a bike ride. I’ll bet you saw that coming, didn’t you?

I took off aboard Big Nellie, my Tour Easy recumbent, heading north along the Mount Vernon Trail toward the city. The weather was perfect: warm, low humidity, a refreshing breeze, a puffy cloud interrupting the blue, blue sky. The trail was somewhat crowded but I made a reasonable pace. Now and then I came to a crawl waiting for a cluster of weekenders to step aside. Just north of Old Town Alexandria a car did a u-turn across the trail. (For some reason cars do this a lot when any point in the road would suffice.) At this point in the trail there are railroad tracks on the right. As I came to a near stop for the car, a cyclists came up behind me and passed me, crossing over the left rail in the process. The cyclists was a MAMIL, middle aged man in lycra. Actually, since he was clearly in his sixties, he probably qualified as an OMIL (the “O” being for “old”) but OMIL doesn’t quite roll of the tonque.

As the car left he began to cross back in front of me. I glanced to the left, saw his skinny front tire, and thought “He’s goin’ down in three, two, one…” BAM!  His tire caught along the rail and down he went directly in front of me. He didn’t roll or skid he just stick the landing on his shoulder, hip and knee.

MOAN. “Entirely my fault. My fault.” Must have been a RABIL (retired altar boy in lycra).

I came to a stop a couple of inches from his sad repose. Two sets of walkers came along. One guy said, “Don’t move, mate.” AMT! Aussie Medical Technician.

We waited for the OMIL to get himself together and watched as he sheepishly called the wife for transport home.

I rode on weaving in and out of the trail peeps. I stopped at Gravelley Park to use a green room and watch a plane take off then headed into the city on the 14th Street Bridge. I expected that the city streets would be congested with the Rolling Thunder Memorial Day event so I stayed along the river. Ohio Drive and Rock Creek and Potomac Parkway were both barricaded so I could ride in the street all the way to Georgetown.

After a brief dance with the cars underneath the Whitehurst Freeway I picked up the Capital Crescent Trail and headed to Bethesda. The trail was crowded as expected. Dodging the walkers, bladers, runners, and cyclists took my mind off the fact that the steering on Big Nellie was messed up. One second it felt like the front wheel was going to leave me behind, the next it felt like the wheel was tracking in a rut. I gave it a good looking over in Bethesda but I could see nothing wrong.

After eating a slice of pizza at Bethesda Bagels (their pizza is as good as their bagels and that’s saying something) I took the Georgetown Branch Trail to City Bikes in Chevy Chase.  There a mechanic (Travis, I think. I am awful with names) took Big Nellie for spin. He said the steering felt fine to him.

On I rode reaching the trestle over Rock Creek Park. I love the view from the treetops here. 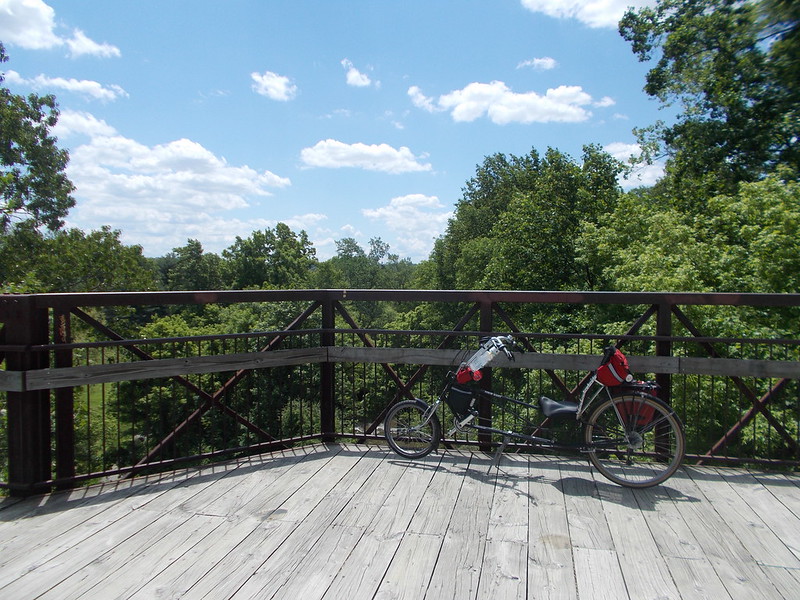 Since I had about two hours to kill at this point, I headed north on Beach Drive in Rock Creek Park. I hadn’t ridden this road in ages and it is a beautiful place to roll. I took a wrong turn but went with the flow and ended up climbing out of the park into Kensington MD. Once there I checked my map app and found my way back to Beach Drive. I took it north all the way to Garrett Park MD. There was method in my route. I figured that if my steering failed she could come and get me at our friends’ Rulon and Heather’s place in Garrett Park.

My steering didn’t fail so I did a uey and headed back toward DC.

Since I was now going slightly downhill my pace picked up. The sketchy steering made this a tense ride but I made it without problem. I stopped to refill my water bottles and headed out of the park up the gradual hill to the Mount Pleasant neighborhood. I kept pace with a woman on a road bike and thought that the new Speedplay Frog pedals made climbing infinitely easier.

Once I was our of the park I proceeded to get lost. I think this may be my greatest cycling skill.

I knew that all I needed to do was find 16th Street and I could find Meridian Hill Park so I focused on that task. In short order I was at the park. An old man was playing chess. Groups of people where picnicing on the grass. Bench sitters were people watching. Frisbees were being tossed. Dogs were being watched. A woman in a bridal gown carried yellow flowers as her soon to be husband stood along side in his suit.  The drum circle beat out a cacophonous rhythm. 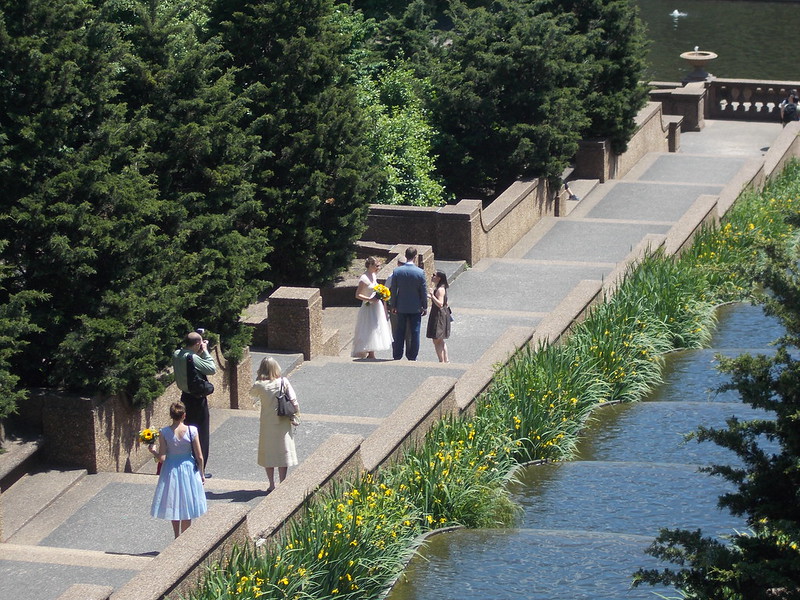 I was a half hour early so I hung out alone and relaxed. After a while I spotted a woman wearing what looked like dark pink-ish tight pants. Flor? No way. I’ve never seen her in colors. So I hung out some more.

A little after three, I duck walked my bike around the park and soon pink tights lady stood up and waved. It was Flor after all. She promptly jumped aboard Big Nellie. Flor is small and Nellie is big so her ride lasted only a few yards. I think Flor secretly wants a recumbent. It would probably just fit in her efficiency condo. (Not.) 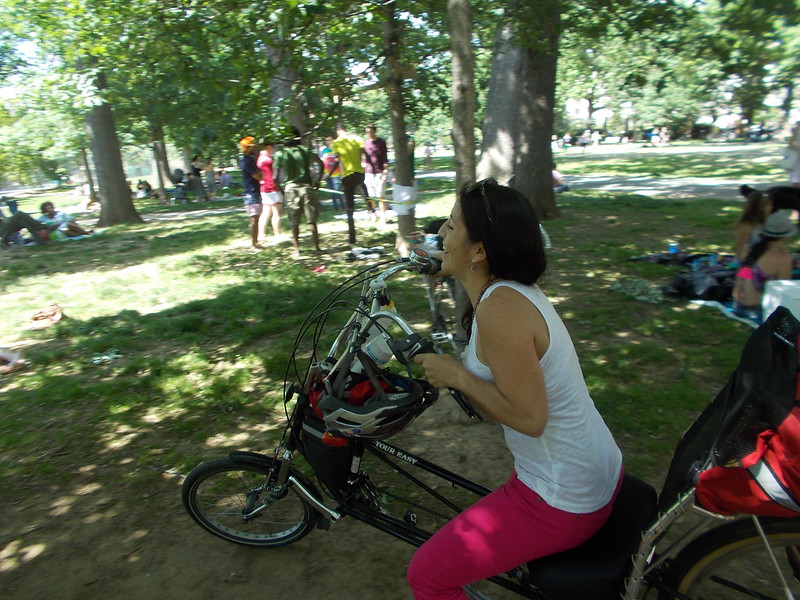 More friends arrived. Food came out. Conversation ensued. Sun shine. Breezes blew. The slack liners did their thing a few feet away. Flor’s rock climbing friend Jonna showed up with a surprise. She was on the nest as they used to say in the moving picture shows. I guessed she was six months along but she is due in three weeks. Go girl!

We hung out for three hours and then it was time to hit the road so that I’d get home before night fall.

The ride down 16th Street was surprisingly devoid of motorcycle traffic. That didn’t make it any less interesting because Big Nellie’s steering was turning my downhill glide into an adventure.

I made it home without incident, 64 miles for the day. Along the way, Big Nellie’s odometer turned 36,000 miles. Maybe the steering is dying of old age.

So I declare the day a success. Perfect weather. Windy roads in Rock Creek Park. Friends and breezes in the park.

Pix of the day are here.

One thought on “To the Park the Long Way”