After bike commuting over 130 miles, I find it hard to motivate myself to go for a long weekend ride. Last year this resulted in me doing some dayhiking. I hope to get back to hiking someday soon.

Another thing I like to do is watch baseball games. Fortunately, the Washington Nationals are playing terrific baseball these days. The Nationals ballpark is 16 1/2 miles from my house. Parking is very expensive. Taking the Metro is a hassle. What’s a fan to do?

Ride to the game.

Yesterday, packed up some PB&J sammiches and rode The Mule to the ballpark to see a game with my friend Katie and her friend William. This is the third time I’ve ridden to a game and it is definitely the way to go. Good baseball weather and good biking weather go hand in hand.

I decided to wear my brand new, 2015 Bike to Work Day shirt. It made me look like a Cheeto. 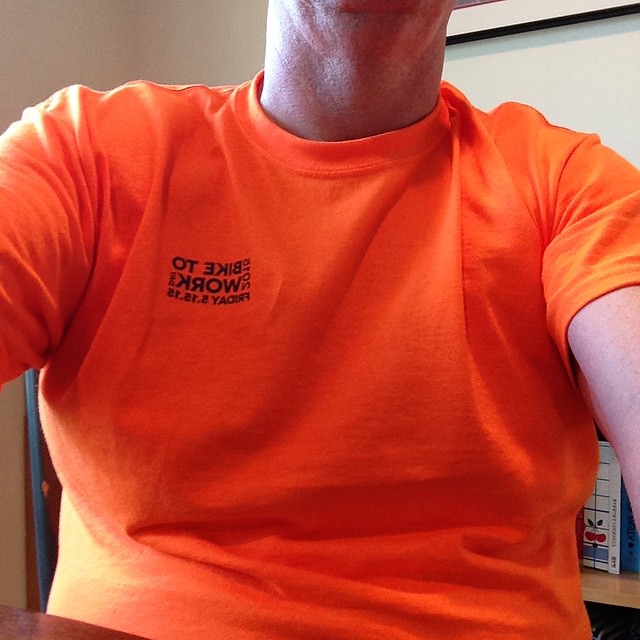 I rode up the Mount Vernon Trail which was a zoo. People of all ages who don’t normally use the trail were out in great abundance. The only way to ride in these conditions is to slow way down and anticipate stupidity. There was lots of stupidity. Lots.

Underneath the Wilson Bridge, a public space is used for all kinds of instruction. So days there are people learning how to fence with broadswords, others there are hard core adult fitness classes. This day there were kids were being taught how to ride bikes. 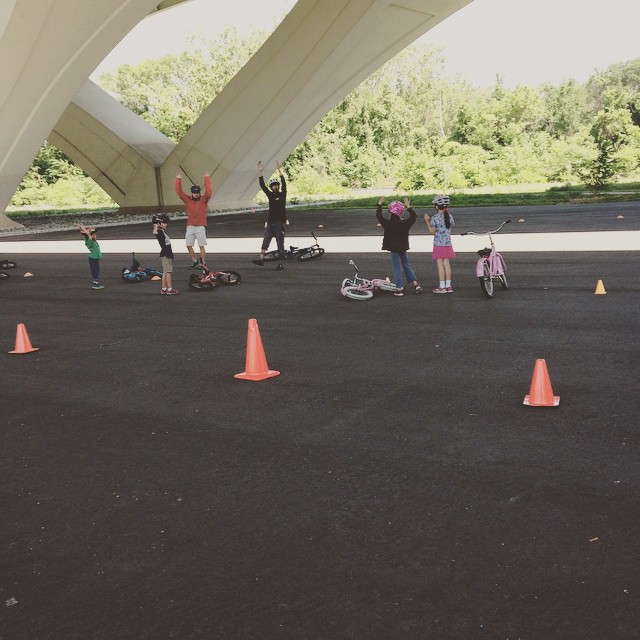 Moving on, I managed not to hit anybody or be hit. In fact I made much faster progress than I anticipated so I stopped at Daingerfield Island to reflect on a sailboat gliding on the river. Until another rider sat down beside me and ruined my alone time.

Back on the bike I rode into the city. It being Memorial Day there were road closures all over the place and no signs telling me how to proceed. So I ignored the closures. I was away from the touristy area in about five minutes. I stopped to take a picture of the construction on the Southwest DC waterfront. Dang, this is a big project. I do hope we end up with something human scale and not all Miami Beach. 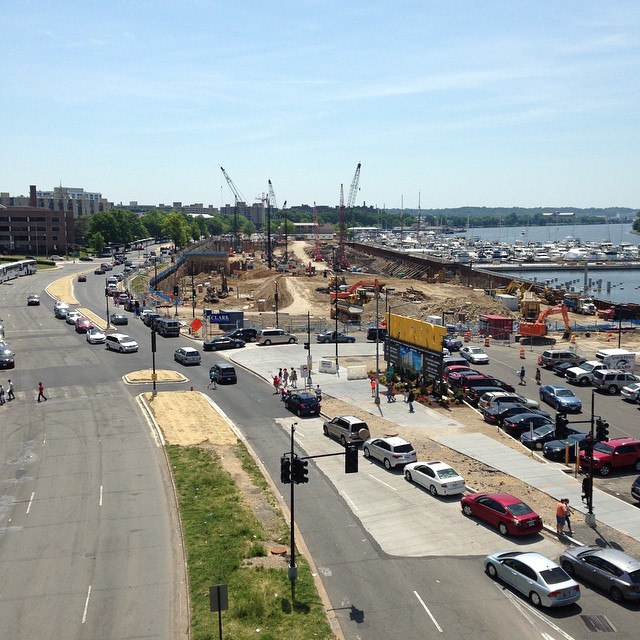 Near L’Enfant Plaza a tourist in a car did an illegal u-turn in front of me. I was ready for him. Believing in fair play, I made an illegal left turn to get on the side streets headed to the ballpark. G Street had little traffic and abundant shade. (DC is a city with thousands of trees. Brilliant.)

At busy South Capitol Street, I waited at a red light. A driver wanted to do a u-turn at the intersection to head back south toward the stadium but there were several  DDOT employees directing traffic and signs forbade u-turns. The driver, whose window was down, started yelling at the DDOT woman standing near me. He gave up and proceeded northward. I turned to DDOT woman and deadpanned, “You know, this is all your fault.” She cracked up, smiled, and said. “I don’t post the signs.”

I arrived at the ballpark and parked my bike in the Bike Valet. Yeah, baby. You take your bike into a caged area where two attendants watch your bike while you watch the game. Is this a great country or what!!!!! (They did not have this service at PNC Park in Pittsburgh. C’mon Pirates, get with the program!)

After acquiring some bottles of water from a street vendor (you can bring food and closed non-glass, non-alcoholic bottles into the game), I headed for our seats. A few days ago, my friend Katie had pounced on $5 nose bleed seats that were actually quite decent. We sat in the shade too, protected by the bit of roof that holds the stadium lights used for night games. 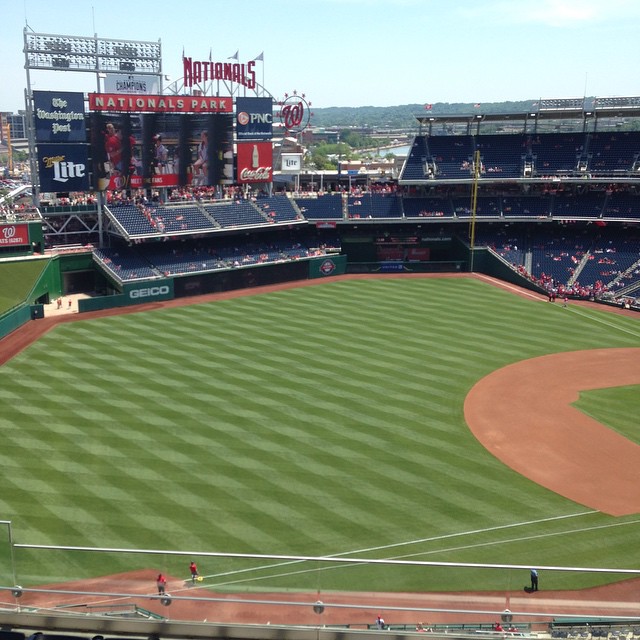 The game was fun. The Nats won thanks to crazy good Bryce Harper and pitching that literally can’t be beat.

The best part of the game was the fact that our section of the ballpark was filled with kids. Sitting next to me was a three year old boy. He was extraordinarily well behaved. Baseball games are long so about the sixth inning he faded into a deep sleep while sitting upright with his legs crisscross apple sauce in his little Keen sandals. Every so often he’d keel over slowly until the side of his head klunked against the metal arm of the seat. His head would then slowly return to verticle and he would slowly teeter over to the opposite arm rest. Eventually we used a balled up jacket and a bag I had brought with me as cushions. When the crowd roared at the play on the field, he went on sleeping. Nothing was going to wake him.

Meanwhile, Katie decided to tutor the ten year old boy sitting in front of me in the fin

e art of baseball scorekeeping. Katie is a master of the craft and keeps a meticulous scorebook. The little boy was at his first baseball game. Katie was taught to keep score when she was a kid by her late father so her tutoring was a labor of love. The two of them were so nerdly. “Here, let me show you…”

After the game, Katie and I went to the Nats Team Store in the ballpark. It was crowded but Katie exhibited her uncanny ability to glide through the mob like a shark searching for prey. Sadly, she was turned off by the absurd prices and the glitter on some otherwise interesting shirts. (Katie: “Baseball t-shirts with glitter. I don’t think so.”)

After the game we fetched our bikes from the valet and rode up to the Capitol for Katie’s ritual victory lap. She was slipping and sliding through people, around bollards, up and down curb cuts. At one point, I nearly broadsided her. I ride more like an oil tanker, I’m afraid. During her victory lap, Katie rode hands free around the new plaza on the east side of the Capitol. It has been ages since I rode no-hands. It’s all but impossible to do this on my bikes for various reasons. I looked on in envy as she joyfully rode around and around.

We said our goodbyes and Katie rode off for her home in DC and I headed back to Mount Vernon. My ride down Independence Avenue was almost noneventful. A big black SUV with Maryland For Hire plates came up behind me and its driver laid on his horn. I turned to him and told him to have a nice day. (Actually, my exact words included an F bomb. His impatience and ignorance of local traffic laws are not my problem. Chill, dude!)

Once away from the mayhem of DC Memorial Day traffic I had another challenging ride. Little kids at Gravelly Point were enthralled by the planes taking off and landing at National Airport. I am amazed that more of them don’t get clobbered by bike riders. I went through this stretch at about 5 miles per hour.

At Belle Haven Park, kids and grown ups were out in force seemingly trying to master the art of not paying attention to their surroundings. I rang my bell and passed a man and a woman, obviously not regular bike riders, wobbling down the trail. The man called out to the woman that I was passing (redundant since I had already rang my bell loudly). She turned to ask him what he had said and, as she did so, she veered directly into my bath. Doing my best Katie impersonation, I swerved around her like a fish in a coral reef.

And so I arrived home after eight hours, 33 miles of bike riding, and a 4-1 Nats win.

Thanks to Katie and William and the kids for a fun day at the ballpark.

4 thoughts on “Bike Me Out to the Ballgame”