Hiking may be my new thing. If I recover from yesterday’s excursion in Shenandoah National Park.

Usually Kirstin and I ride bikes together. when we ride, I’m usually riding much slower than usual. Her name online is Ultrarunnergirl for a reason: she does long runs usually offroad. I think of this as high speed, long distance hiking. So yesterday, the hiking shoe was on the other foot as she took me to White Oak Canyon in Shenandoah National Park for a day of hiking.

We left her place at 6:30 and drove 2 hours to the trail head. The last few miles were some of the most scenic rural roadways I’ve ever driven. (One house we drove by was named Chateau Debris by its owner. It was actually quite nice.) 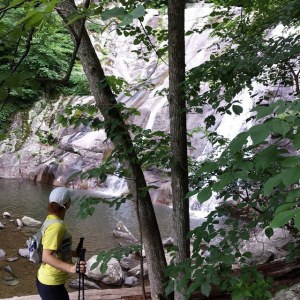 We decided to hike based on how we were feeling. We headed up White Oak Canyon trail. which begins around 1,000 feet above sea level. Basically, the trail follows a stream up hill past one waterfall after the next. It’s a moderately difficult hike (for me anyway) so it took about 20 minutes for me to get into a rhythm. Kirstin took mercy on me and went at my speed. She had hiked this trail before so she knew the best places to stop and check out the scenery. And there was a lot of scenery. It’s impossible to capture this using a camera. The sounds of the water, the sun streaming through the canopy, the quiet of the woods.

We made it to the top of the trail and made the decision to hike the fire road up to Skyline Drive. Somehow the trail maps we had made everything look shorter and easier than it was. The fire road was long but, unlike sections of the trail, was not at all technical.

When we reached the road we stopped to consider our options. Just the first of what would turn out to be several ultrarunning friends and acquaintences of Kirstin came bounding by. She described where she had been running/hiking and where she was about to go. Clearly she was not human.

After she left, we decided to hike the Lower Hawksbill Trail to Hawksbill overlook, the highest point in the park at nearly 4,051 feet. (As a point of reference, Old Rag is 3,268 feet.)

It went up. It was relentlessly steep. We were soaked in sweat from the muggy air. And we made it. The overlook provided spectacular views to the north and northwest. Farmland. trees, mountains and towns for miles and miles. A cloud bank was drifting in from the northeast adding dramatic contrast to the view. 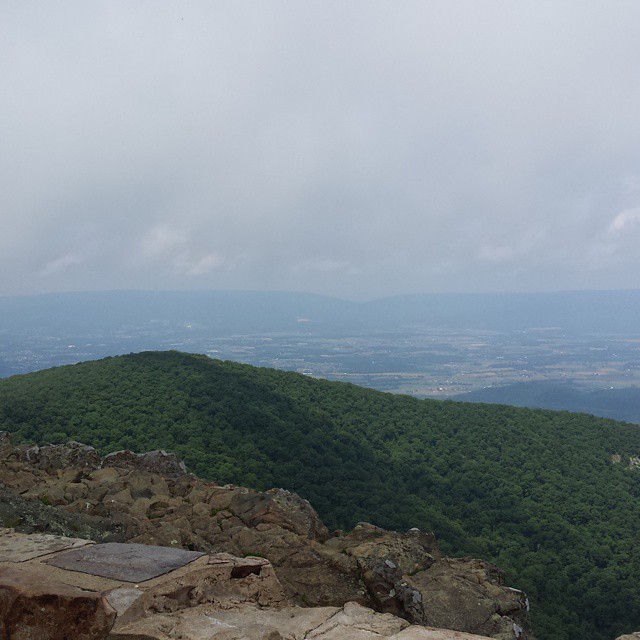 We stayed at the summit for twenty minutes or so then started down.

Did I say down?

My legs had grown accustomed to the uphill which allowed me to use my bicycle quads and butt. Going down was all about beating the crap out of my legs to essentially stop me from careening and tumbling to a rocky face plant. Speaking of rocky, except for the fire road, these trails can make for difficult footing so you have to be mindul of not turning an ankle.

Once we made it to Skyline Drive we quickly decided to use the Cedar Run trial to hike back to the car. Kirstin remembered this as a relatively boring, non-technical trail. As it turned out, after about 1/2 mile of easy going it tuned into quite a difficult trail, mostly because it was really rocky.

As the humidity climbed, the rocks became slippery, much more slippery than they appeared to be. My feet slipped from time to time. Once requirng and awkward twisting of my torse to recover my footing. This is not good for someone with a history of back problems. Fortunately my back didn’t seem to mind.

Later I stepped on some slippery rocks than made both my feet slide out. I caught my backwards fall with one hand before my butt hit the ground. Graceful am I.

The rest of the hike down took much longer than either of us expected. As our legs tired, the constant pounding and carefull foot placement made for rough going. We stopped to admire an owl in a tree. I couldn’t get a decent picture of it. Kirstin might have but at our next stop her iPhone fell into a swiming hole. After retrieving it she went in for a soak. I took my shoes off and walked in a foot or two. The water was so cold my feet went numb.

We trucked on, somewhat surprised that in order to go down we 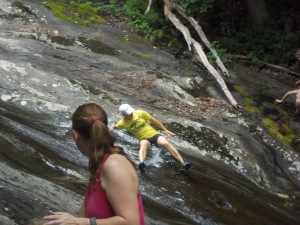 occassionally had to climb some pretty steep short bits.

We came to the waterslide. Some of Kirstin’s untrapeeps were having a blast sliding down the big rock face in the creek into a pool of frigid water. I had done this on the Ausable River in the Adirondacks and hurt my tail bone so I took a pass. Kirstin gave it a go. She tried to wave and her body twisted awkwardly. No worries she splashed down without a problem.

As we hiked the last 1/2 mile or so, visions of ice cold beer danced in our heads. Kirstin kept laughing because the distances seemed so much farther than the map indicated. When it was all said and done, we had hike 12 1/2 miles and done the equivalent of 322 flights of stairs (so said her Fitbit).

On the way home we stopped at the Griffin Tavern in Flint Hill. It’s a cool old house with a wrap around porch. We chose to sit in the barroom because that’s where the beer was. The beer was ice cold. The burgers were yummy. We were chuffed.

Some more pix of the hike are on my Flickr page.

Many thanks to Kirstin for taking me on my first bigtime day hike in the Shenandoah National Forest. What a beautiful place.

Aftermath: I was pretty sore after the hike, mostly because of all the downhills. I woke up this morning feeling as if I had run a marathon. Walking downstairs was very difficult. My quads and calf muscles are super tight. Lucky for me, Mrs. Rootchopper got me a sports massage for Father’s Day. I am going to wait a while before using it. My recovery will be an easy bike ride to the bike shop and to Old Town, followed by RICE: Rest, Ice (cold beer), Couch and Espinosa.

2 thoughts on “What Goes Up – Hiking in Shenandoah National Park”

The Dude Abides. I'm A Dude AbiKes. I wonder as I wander around Austin on a bicycle.

On the Road
It's not about the destination, it's about the journey

The Dude Abides. I'm A Dude AbiKes. I wonder as I wander around Austin on a bicycle.

On the Road
It's not about the destination, it's about the journey