Two weeks on the road. I’m in it thick now.

I broke my no McDonalds food rule and ate dinner next door to the hotel. I ran into Jason and George and we had a long chat.

The free breakfast at the hotel was actually pretty decent. I fueled up like I was going trekking in the Outback. On the way out I grabbed an apple and a banana for the road.

I was directly in route so I wasted no time. The roads are getting better and better in terms of surface, traffic, and lack of rumble strips. Today’s start was a bit late owing to my need for sleep. The wind was at my back and the skyscapes were picture pretty.

I was just rolling along heading mostly west. The landscape was significantly less boggy. There were more pine trees in the woods I was passing through.

I entered a new state after 25 miles. Although the South Carolina roads did get much better this morning, they can’t compare with the roads in Georgia. They are smoother and wider. Only at the end of the day did I have to deal with rumbles strips. 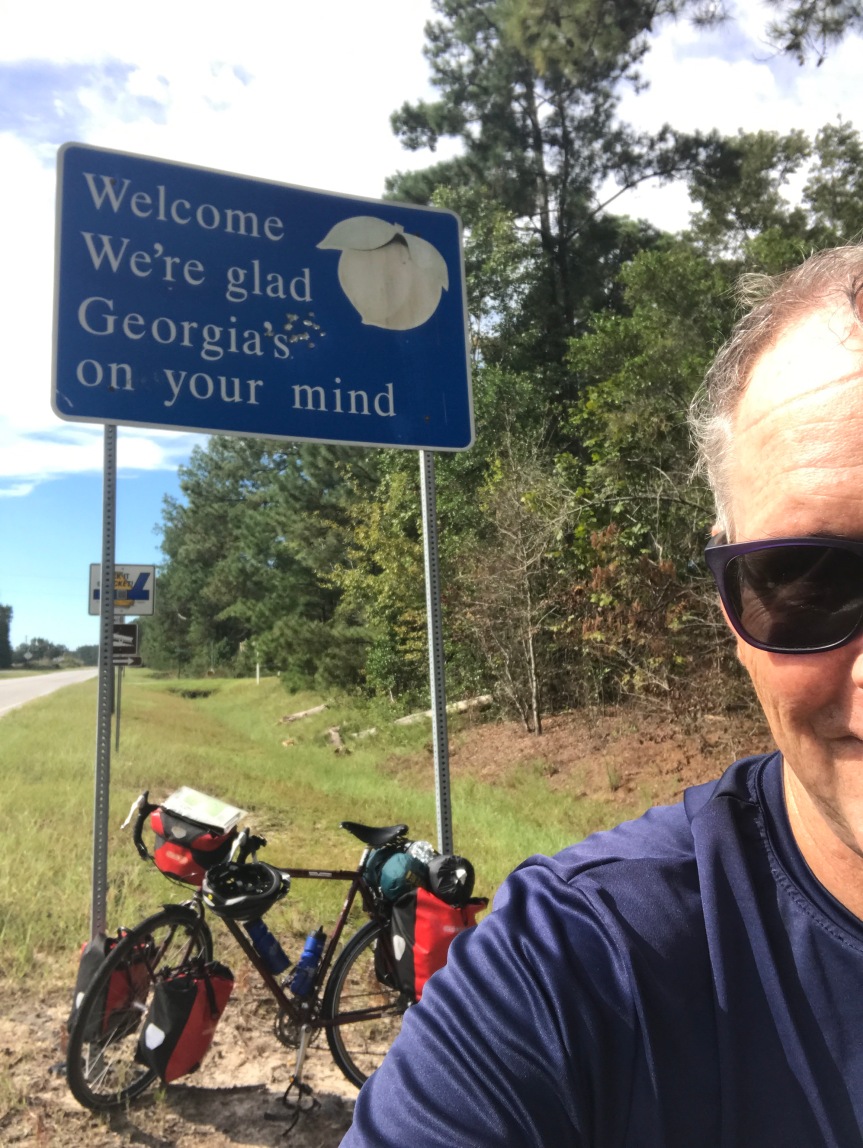 I stopped in a country store at the state line.  It was in an El Cheapo gas station.

After a few miles my perfect skyscape was obstructed by smoke. I was worried that I had stumbled into a forest fire but I never saw the cause of the smoke.

So I rode on. After 50 miles I was running out of gas. A gas station had a shop with eat-in “food”. It was fried chicken with fried potatoes and mystery rice. (The rice had stuff in it that didn’t belong there so I ate around the alien objects.) I followed that disgusting gastronomic experience with a chocolate chip cookie ice cream sandwich.

Back on the rode I lasted a couple of miles before seeing a Dollar General store. They are ubiquitous in the south. They are a five and dime store that looks like a grenade went off inside. If you look long enough you can find what you are looking for. I found some insect spray with enough deet to kill a pterodactyl, some sun screen, and some lotion for my dried out skin.

I rode into Statesboro. There doesn’t seem to be much here. It’s an east coast version of Gertrude Stein’s Oakland.

I was going to camp but the campground only seemed to have expensive cabins so I’m holed up in a hotel a half mile from town. It’ll do.

Tomorrow it’s on to Savannah. I plan to go another hostel. I haven’t heard back from the owner yet.