Well, it was a nearly nice day here in DC with temperatures in the 50s and light winds. Light rain was the only thing keeping me from celebrating. I rode 29 miles, mostly in the Fort Hunt and Woodlawn areas before finding myself at the gym. After a half hour of weight lifting, I rode home. Lunch was followed by a lame attempt at listening to a podcast. When I awoke it was time to leave for the Crystal City garage bike races.

The 11 1/2 mile ride in the rain was not unpleasant. Faint praise, I know.

Shortly after arriving at the garage, I had a grilled cheese sandwich with guacamole and jalapenos peppers. I somehow managed to refrain from ordering another. Maybe it was because of the cherry pie I had for desert.

Bob “Don’t call me Rachel” Cannon and his wife Elizabeth brought three dogs that were being put up for adoption. One was a mere puppy. I would have taken a picture but it broke the cute-o-meter on my iPhone.

Then the races began. Every time I see people racing bikes all I can think of his “You have to be insane to do this.” I stood with Laura from the Washington Area Bicyclists Association. She was checking out the scene with the intent of racing next week. Let’s just say that Laura appears to be a few spokes shy of a wheel. (Hey, pretty cool name for a blog!)

After the races I rode home. About halfway there I rode the long wooden bridge on the Mount Vernon Trail behind the Slaters Lane apartment building. As I turned a corner I saw something standing on the railing of the bridge. It was an owl looking right at me. He was over a foot tall and seemed unconcerned with my presence.

Errand No. 10: Arts and Entertainment 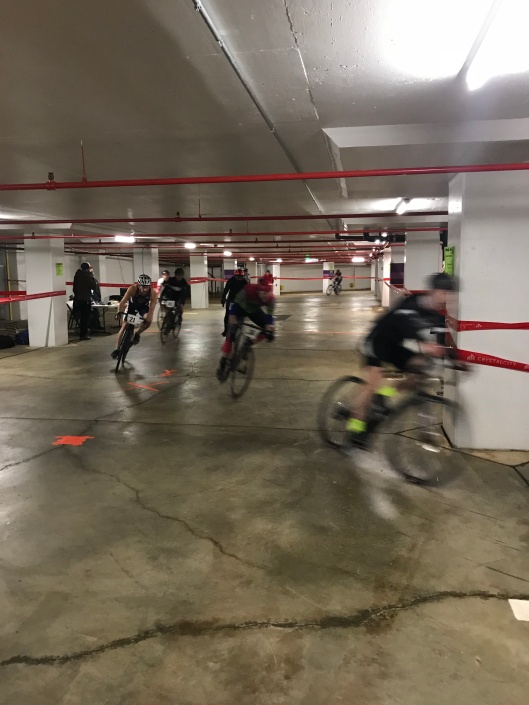