After a fine hotel breakfast or two at the Super 8 in Watseka (a surprisingly nice place, BTW) I asked the Google for directions to get me back on my route. The Google did an outstanding job directing me down perfect country roads with plenty of trees to shade me from the headwinds.

The headwinds today were about half as strong as yesterday and easily manageable. When I started riding it was 55 degrees. It warmed up to the high 70s with moderate humidity. Until mid afternoon there was literally not a cloud on the sky. Dang it was nice out.

The Google route was windy (as in not straight) but after days of riding a grid it was a welcome relief.

Many of the county roads are paved with chip seal. The road is coated with sticky tar and then gravel is put in top. I road a few miles on roads that had been recently renewed. It slowed me down but didn’t approach the level of unpleasantness that other bike tourists had warned me about. 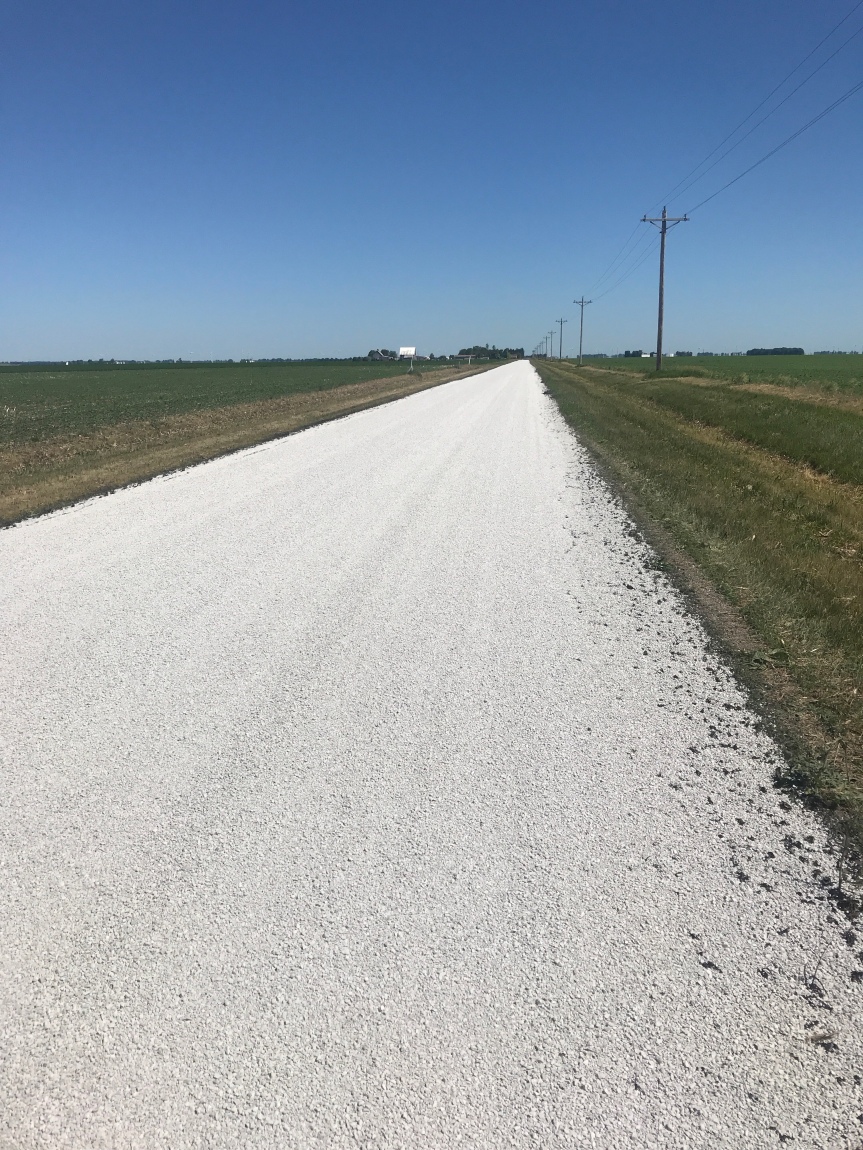 The dandelions on the side of the road are enormous. I didn’t see any yellow just these big fluff balls.

Another item of note is the bird life. I spotted what looked like an osprey chowing down on some prey in a field near the road. Seeing me he took off and landed on a telephone pole about a quarter mile from his meal. After I passed he flew back to it.

And there is a small bird that looks to me like a sandpiper. It’s about the size of a cardinal. It gray-ish feathers on its wings and tail with a brown patch just above the tail. They only fly a few feet off the ground. After flying for 30 yards they land and run for a few feet before taking off again. They are entertaining to watch and I must have seen 100 of them today.I road past several wind farms today. It’s amazing what happens when you plant a turbine seed in a corn field.

I once saw a turbine blade on display near the Energy Department. The thing looked to be as long as a football field. (How they drove into DC with it is beyond me.) Anyway, seeing these things from a distance is truly impressive but up close they are hypnotic. I nearly ran off the road I was so captivated by them.Another thing I noticed today is that the pool table is starting to have some gentle up slopes. I probably climbed 200 or 300 feet today, 30 feet here, 20 feet there. In Kempton I stopped for lunch at Tom’s. There is a mural that runs the length of the building. It’s a bit like to cover of Sgt. Pepper’s. I parked The Mule to the left of Dorothy from the Wizard of Oz. Is she signing something?

In Odell I crossed Route 66. There is now a bicycle route that follows the route from Chicago to Los Angeles. As I was taking a picture of the sign a woman jumped out of her car to get a picture of her own.

My plan had me stopping at Cornell Illinois but there were no campgrounds or hotels there. There was plenty of daylight left and I was feeling fine after 67 miles so I continued on to the City of Wenona. They let bike tourists camp in the city park. It’s a very nice set up and the shower was the best. My thanks to the Wenona police officer who directed me to the park (and checked up on me later) and to Sheila who showed me around and gave me the secret code to the shower room.

On days like this I have a hard time getting off the bike. I rode 92 miles. My total for the first two weeks of the tour is 1,030 miles.