Drinking a half gallon of caffeinated soda at 9 p.m. might not be the best formula for sleep but I did it anyway. After yesterday’s beatdown from hills and headwinds I could not get enough to eat. I had PB&J sandwiches, a Snickers bar, two chocolate chip cookies, and fast food. And my pants are falling off. No lie.

I had two breakfasts because, well, no food be said “Stop!” I think I am going to get banned from some hotel chains.

I decided to stay on the due west Adventure Cycling Northern Tier Route because the Google instructions for riding into Iowa on a northwestern diagonal were much too complicated.

On the road around 8 I instantly felt regret. It was cool and there was a strong wind from the east. Perfect tailwinds for a fast bike ride. Why didn’t I get on the road sooner?

Leaving Kenawee I was cruising at 15 to 20 miles per hour. Hills? What hills?

The level prairie had given way to rolling hills. The main crops were corn and soybeans as before but they were planted in curves that matched the topography.

I didn’t take any pictures because I was too busy taking advantage of the fantastic conditions. I stopped for lunch st a 7-11 in Sherrard. I was half way to Iowa at 11:30,l. When I came back outside, the wind had changed direction. It was now a crosswind out of the south. It gradually shifted to the southwest creating something close to a headwind.

Still I was grateful for 38 miles of assistance.

I stopped a couple more times just to break up the grind.

Then I saw this sign. Not again. It was ambiguous. 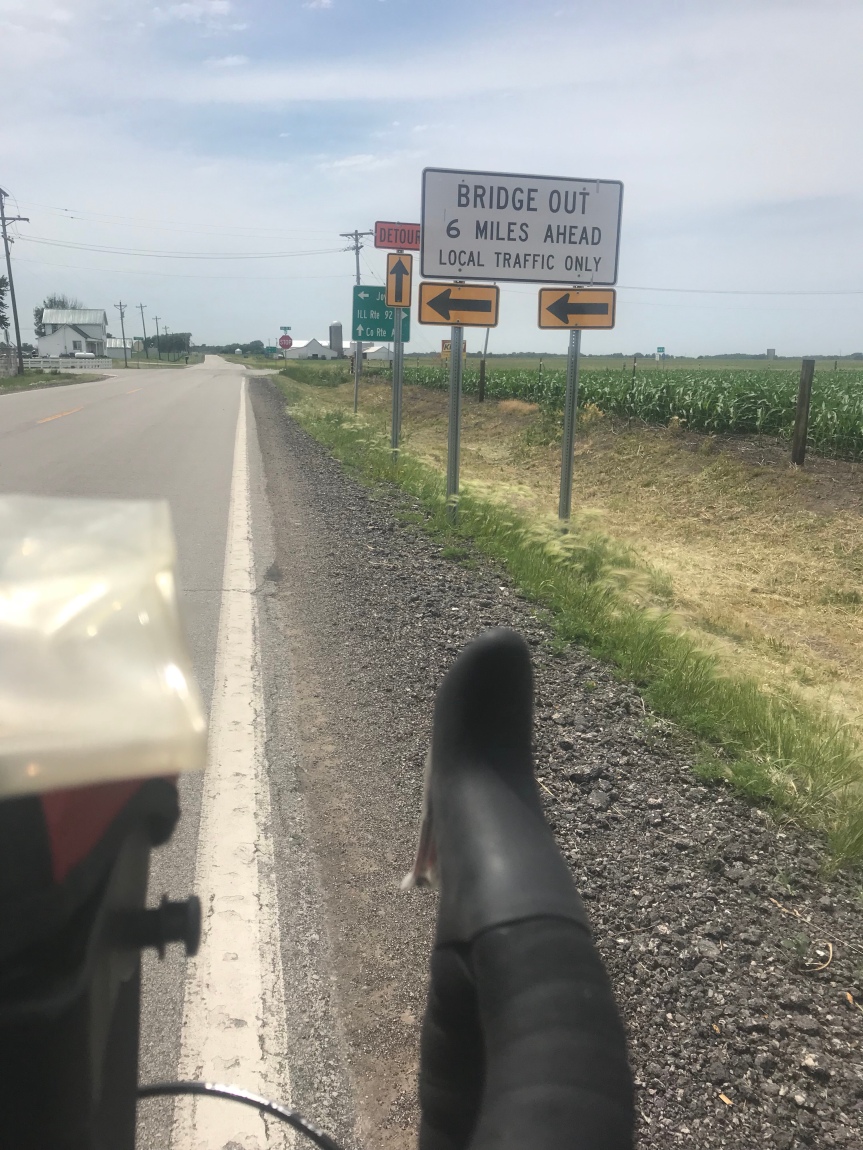 I ignored it and never encountered the promised outage. At about the point where the outage was supposed to be, I caught a mile long curvy downhill on smooth pavement.

After a few more miles I stopped to orient myself. Next to me were acres of crops clearly in a flood plain. 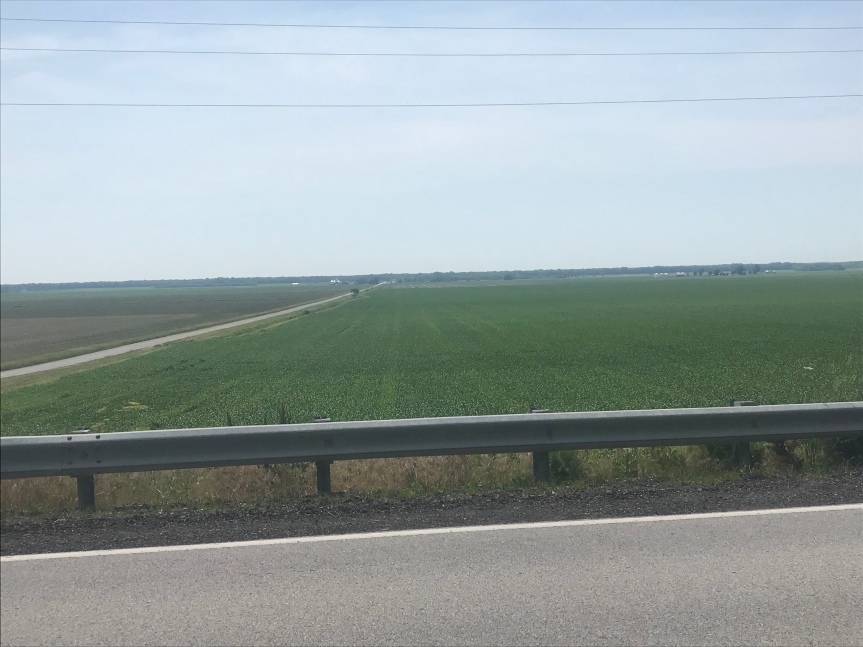 My head was immediately surrounded by annoying flying insects. I won’t be camping near here was my immediate thought

Soon I was on a busy highway making use of my mirror just like in South Carolina last fall. 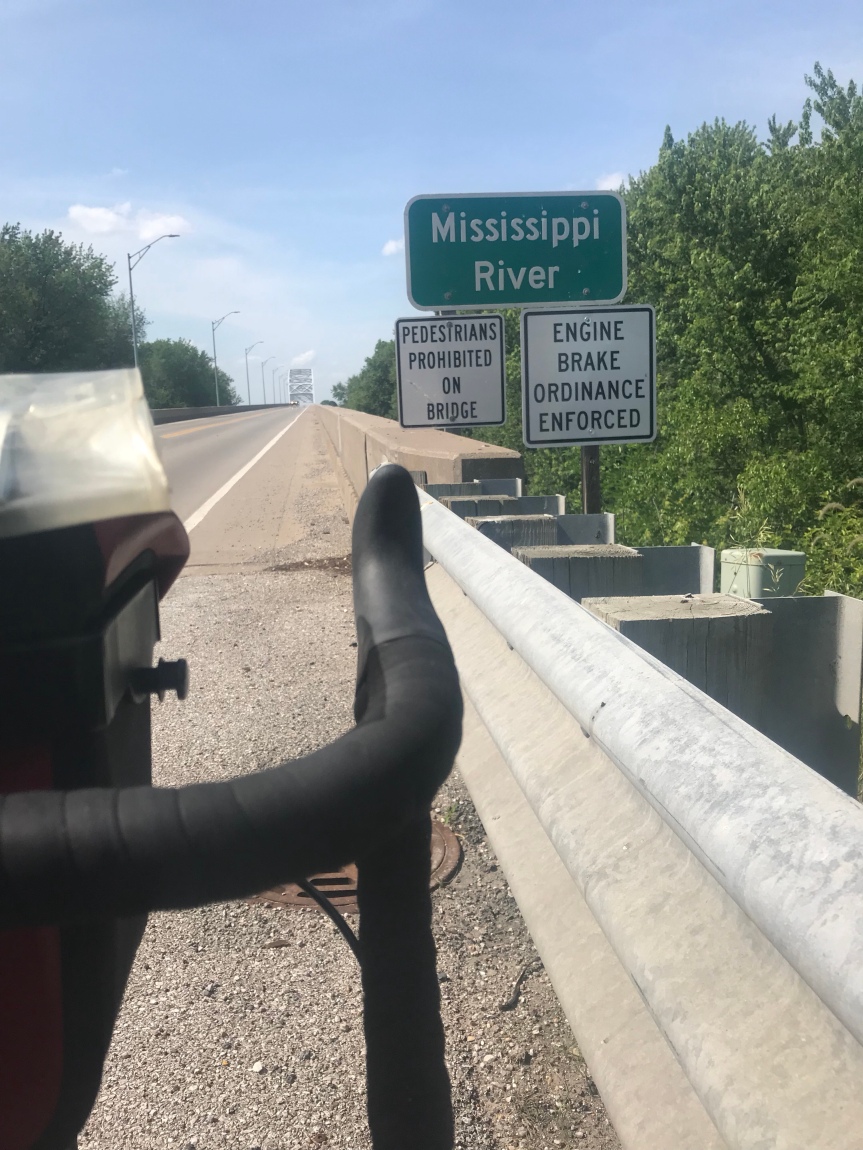 At the top of the bridge I stopped to check out the Big Muddy.

On the far side of the bridge in the city of Muscatine, I put a notch in my handlebars for the 8th state on my trip, Iowa. 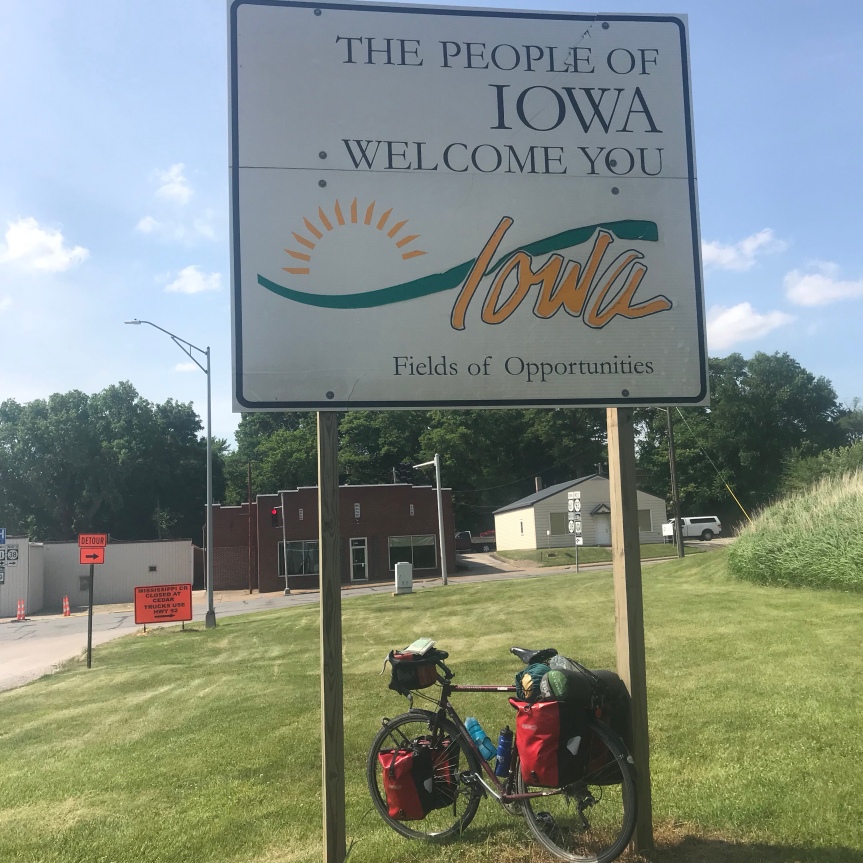 A search with The Google turned up several hotels. After stopping for a celebratory ice cream cone, I pedaled onward looking for shelter.

Traffic was heavy and the highway unwelcoming, so I turned down a grassy hill into the parking lot of a Super 8.

One thought on “Any Road Tour: Day 16 – Tailwinds to the Mississippi”