I awoke at 5 with a very urgent tummy rumble. The town park restrooms were locked. I found a gas station in town and the crisis was averted.

I packed up and read The Beekeeper’s Lament which is about the bee keeper I stayed with in Gackle ND.

Once the grocery store opened I stocked up on fruit, water, and donut holes. Then I rode down to and across the Columbia River. It’s beautiful but there was no shoulder on the bridge so there’s no photo.

Then the fun began.

Then up. And up. The sign said 8 miles to the pass. 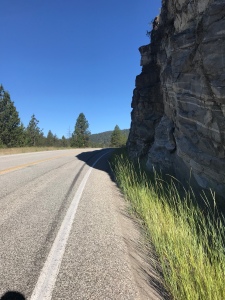 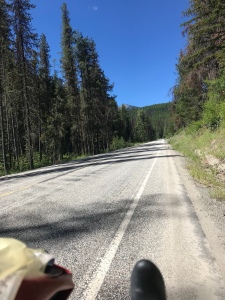 A tiger swallowtail started doing loops around me as the tailwind pushed it and me up the hill. The butterfly won.

Miles of climbing passed slowly by. My head was hanging. I looked up. There, standing across the road and looking right at me, was a moose. He was not a big bull moose, more like a young adult with a small set of antlers. I stopped and reached for my phone to take a picture. Then a white sedan came around the bend beyond the moose and the moose moseyed into the woods.

A Lycra clad cyclist rode past me and said, “Nice moose. Too bad about the car.”

More uphill slogging ensued. A second tiger swallowtail came to play. I appreciated the diversion as the climb steepened. I was counting down the miles to the top. A mile and a half to go. Then I saw a sign. I had reached the pass a mile early. Saints be praised!

I took the obligatory photo then jumped on my bike and headed over the top. 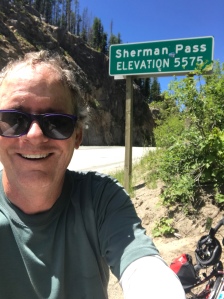 Three miles from the top a woman was pedaling furiously in her granny gear. She looked up and smiled. I yelled “It’s worth it!!” as I zoomed past at 30 mph.

For most of the descent I was doing 30 or more. Runaway train down curves and switchbacks. What a blast.

At the bottom my legs were sore from maintaining control of the loaded bike.

I climbed a few hundred feet into Republic. After lunch in a cafe I called DiAnne, my Warmshowers host. She gave me directions just as Martin rolled up. We rode to her house together. It has an amazing view of the landscape. 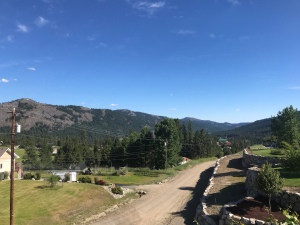 The town is part way up to the next pass, Wauconda. So we are psyched for tomorrow’s shorter climb.