I stayed at a Warmshowers host in Republic. I could have camped but Martin reminded me that DiAnne Hewitt wrote an interesting thumbnail on the app.

They live high above Republic. With chickens and a blind and deaf dog. Dianne fixed us a fantastic dinner. She’s a postmaster do we talked postal stuff for a while. When Boyd came home he told stories about his life in the gold mining industry. Yep, it happens every day on a bike tour. You stay with bee keepers and gold miners.

After coffee we rode down the hill to town where we had more coffee. Martin took off as I lingered at Sparky’s coffee house.

The ride down to 1,000 feet over about 30 miles was a blast. It wasn’t until I reached the bottom that I realized the wind direction had changed as well.

And the temperature was no longer the 60s and 70s of the last few days. I was now in the dry desert-like conditions of the Okanogan River valley. 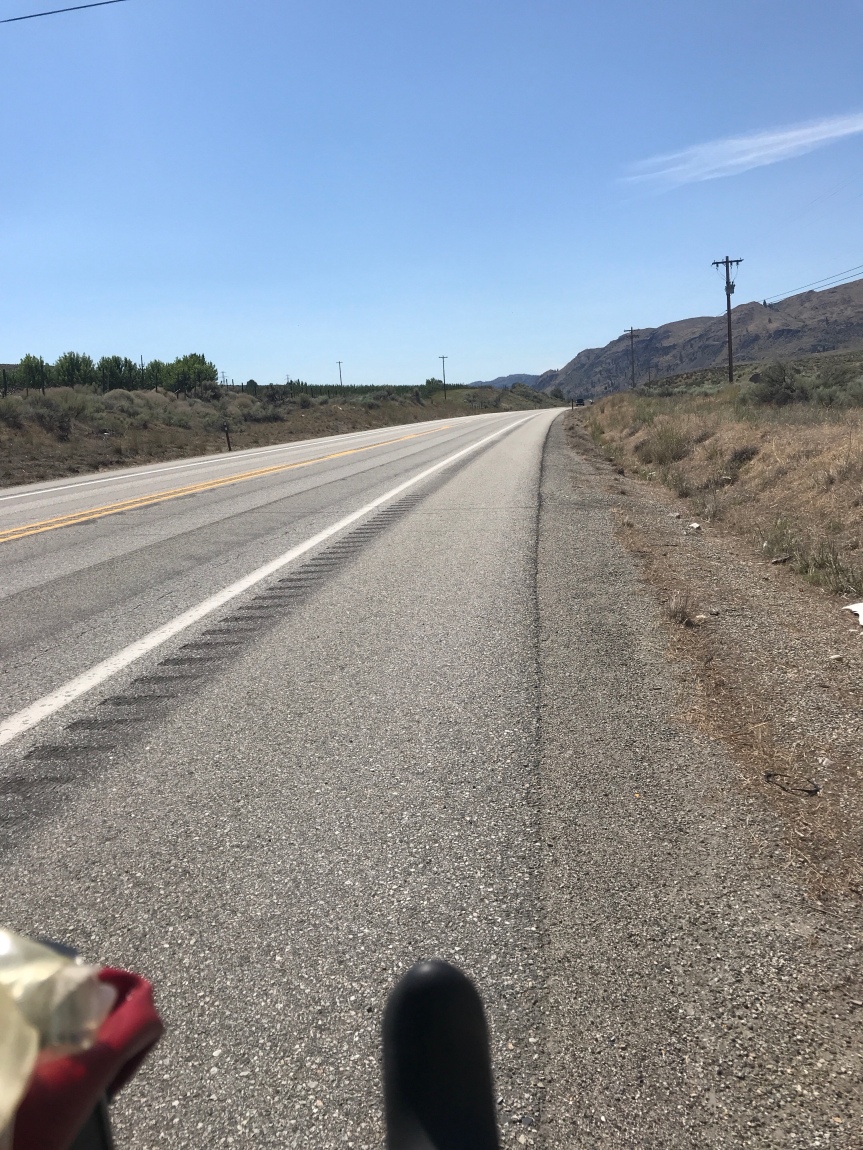 In Tomasket I caught up to Martin who was finishing breakfast and talking to a couple who had arrived on a motorcycle. They bought his meal for him. Trail angels on a Harley.

Martin took off as I enjoyed some lunch. When he stepped into the sun he remarked that it was hot.

He was right. The temperature had climbed into the mid-90s. No worries. I took my time and everything was fine until I hit four miles of road construction. I had to slog along through gravel under direct sunlight. Ugh.

I finally reached East Omak. For the first time in memory, I saw homeless people. Crossing the river to Omak, life didn’t seem a whole lot better. The final four miles into Okanogan were mercifully flat. The town park had camping and there were plenty of people camping there. No bikes though. It was also 95 degrees. My gut and my broiling skin convinced me to get a hotel room. I’m at a low Quality Inn. Weak AC and a broken washing machine. Well at least it has free breakfast. (My money’s on stale cereal.)

Tomorrow I ride the over Loup Loup Pass. Into a headwind. 3,000 feet up in less than 20 miles.

I have looked at my schedule again and realize that I can’t easily make a flight home on July 21 so I’m going to push my return back a few days once I get to Camano Island.

One thought on “Any Road Tour: Day 49 – Wauconda Forever?”