My stay with Warmshowers hosts Joan and Greg could not have been more relaxing or not enjoyable. 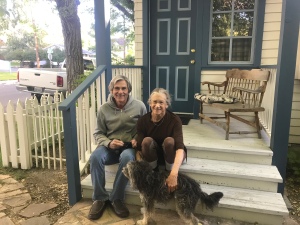 They both assured me that the big climb from Carson City to Lake Tahoe was something I could handle easily. Thx fully they were right.

I kept plugging along, thinking this climb is going to get tougher but it never did. I came over the top and, at Greg’s suggestion, stopped before getting to close to the lake for an amazing view. Seeing the snow covered mountains reflected in the deep blue water was a Wow moment.

Once I arrived at the lakeshore things got much busier. Car traffic was terrible and a real shock to me. Also the road undulated up and down so much that I had a hard time finding a pedaling rhythm.

There was no sign indicating I had left Nevada and entered California. I could tell by the fact that the big casino hotels were replaced by casual eateries.

I had second breakfast at IHOP, a mediocre meal but necessary to gurl my engine over the mountain.

After leaving the lake the route followed the Upper Truckee River. It left the highway and followed a windy, bumpy parallel road that became very steep. I walked the steepest bits then got on the bike and powered my way back to the highway. Climbing over my second summit was hard but I got it done.

A fun descent took me to an intersection where I had considered camping but I was feeling strong so I decided to tackle 8,500+ foot Carson Pass.

This went fine for about six miles then the shoulder of the road disappeared. It was about this time that I started feeling lightheaded. It was unsafe to wobble all over the road so I walked the last half mile.

At the summit I talked with a woman who had passed me on the way up in her Trek Domane. Then a father and son came walking out of the woods carrying skiing gear. They confirmed for me that people ski year round on this mountain. At the summit, the road crossed the Pacific Coast Trail. A through hiker was lying on a bench. His tales of hiking the trail blew me away. I thought my trip was hard but his included using an ice axe to get over Mt. Whitney!

After chatting I rolled down the western side of the pass thinking of food and lodging. I passed up a lodge at Caples Lake and continued down hill to Kirkwood. There I met Dan and Spencer, two guys who install road signs all over California. The lodge was closed so Spencer called a number on the front door. They wanted $180 for a room in a town that was practically deserted. No thanks.

In short order we found out that Caples Lake was the only place around at a moderate price. Dan and Spencer hoisted The Mule into the bed of their big pick up truck and gave me a lift back up to Caples.

After getting cleaned up we headed out for dinner and beers at the Kirkwood Inn. Everything seemed overpriced but the portions turned out to be huge.

We ate and drank until sated then headed back to the lodge where Spenser started a fire in a pit next to the lake. I went to bed tired but satisfied with having completed the last big climbs of the trip.