The heat and humidity left town last night. The gross DC summer has ended. (I hope.) It was time to open the windows and breathe.

After reading the paper, I climbed aboard The Mule and headed northwest. I took the inland route to Georgetown. This uses city streets and lightly used trails and bike lanes to avoid the Mount Vernon Trail. On perfect weather days, the MVT is jammed with people. For some reason the authorities did not inform them that the trail is MINE!!!!!

To be honest, the inland route is a bit hilly in spots but it has its charms. I picked up another free golf ball near Belle Haven Country Club for a start. Then there’s the scenic majesty of the loading docks of the buildings in Crystal City. And let’s not forget the glorious vistas of the massive Pentagon North Parking lot. You can tell we are not at war because the lot was empty on a Saturday.

Well, I made it past all of them and around the north side of Arlington Cemetery. White crosses in row after row after row. Next it’s up the hill past the Netherlands Carillon (which is surrounded by scaffolding these days) and onto Lynn Street through beautiful downtown Rosslyn. (Sarcasm alert.)

I rode across the Potomac on the Key Bridge onto busy M Street. It was the busiest I’ve seen this road since the pandemic started. A right turn at Wisconsin Avenue brought me to the Water Street protected cycletrack. Sadly, the cycletrack ends after a couple of blocks and I had to waltz with the SUVs looking for street parking. The street ends at the Capital Crescent Trail trailhead and next to a boathouse so the SUVs all get to do a 3-point turn in the midst of heavy bicycle and pedestrian traffic.

The Mule and I made our way onto the CCT. The adjacent, unpaved, C&O Canal towpath was a mud pit so I decided to take the CCT all the way to Bethesda.The CCT wasn’t all that crowded except for a group of skateboarders that stretched about a mile in length.

In Bethesda I weaved through the diners and pedestrians who had taken over the city streets and followed the detour signs to Jones Bridge Road. The detour gets around the re-construction of the Georgetown Branch Trail. Jones Bridge Road is a busy thoroughfare during the week as it runs along the Bethesda medical complex. On Saturdays it’s rather calm. Soon I had doubled back across the GBT right of way. I could see where the old Rock Creek Trestle was. This was one of my favorite spots in DC. You could hang out above the treetops which made for a pretty great show when autumn colors arrived.

Crossing the GBT right of way I headed downhill toward Rock Creek Park. A big white SUV passed me with its engine roaring. I yelled “Wow. I’m impressed” into its open passenger side window. A minute later I pulled up behind Mr. SUV at a stop light.

About a half mile later I was on the closed section of Beach Drive, the main road through the park back to Georgetown. It’s insane that such a beautiful park is right smack dab in the middle of a huge city. Beach Drive winds its way down the Rock Creek canyon, crossing and re-crossing the creek. The road has recently been repaved so the riding is just about as sweet as can be.

And the scenery is like this. For mile after mile. 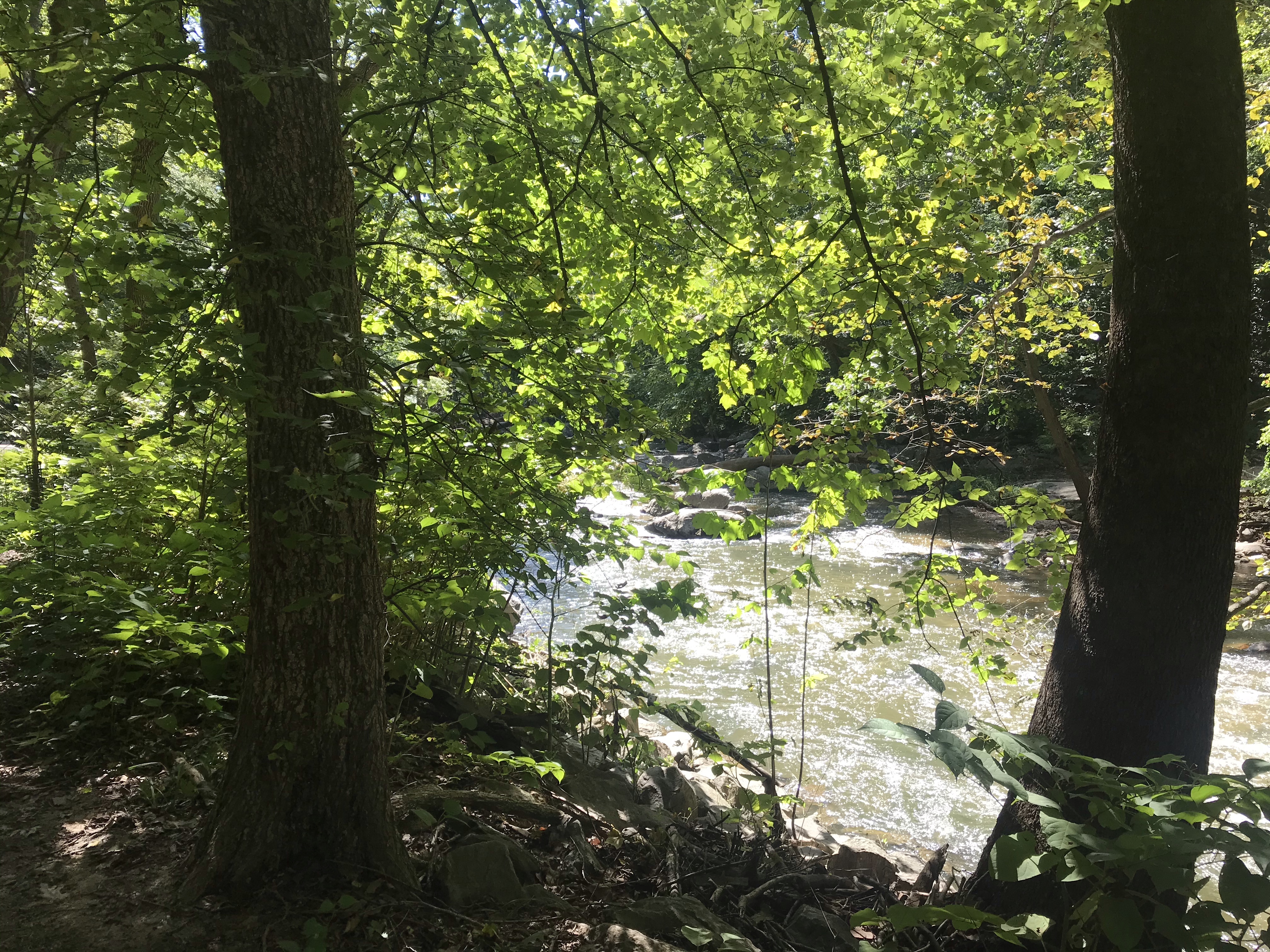 Beach Drive is open to cars and gets a bit hairy nearer to Georgetown. At one point a Maryland driver zoomed passed me honking his horn. I returned digital fire. Then in the interest of self preservation I switched to the side trail. The trail was a mess. Recent rains have caused the creek to overrun its banks. Standing water and mud covered the pavement. I survived.

After passing the Watergate and the Kennedy Center, I entered the beach volleyball slalom. The courts were closed but it was just my luck that the Bikeshare tourists from Oshkosh were in town. They rolled slowly in a sort of mechanical blob for 100 yards or so before stopping all over the trail. One on this side, one on that side, one in the middle, a few off the trail on the left and a few on the right. They then began asking each other where they wanted to go (Hint: the big marble building in front of them was the Lincoln Memorial). I rang my bell and yelled “Coming through!” They said “Oh.” They then proceeded to waddle their bikes all over like the players on an electronic football game or a gaggle of startled geese.

I survived this too. The weather was so good I didn’t cuss or anything. Honest.

Soon I was crossing the Potomac on the Memorial Bridge back into Arlington to reverse course around fab Pentagon North Megaparkland! They should charge for the views.

After clearing Old Town Alexandria I decided to try the MVT for the last few miles home. The first mile was rather frustrating as expected (Okay, let’s assemble the entire family right here on this paved trail while ignoring 30 acres of pristine lawn), but the traffic thinned out and the last two miles were copacetic.

Just before home I stopped and picked up some drugs. The deep discount for my asthma medicine was discontinued. Alas, I am now too old for Big Pharma’s mercy. My glaucoma drops thankfully are still reasonably priced.

I also got a flu shot. It was free. Thanks, Obamacare.

I arrived home after 51 blissful miles. I have now ridden exactly 7,000 miles this year.

It’s time for some baseball and junk food. Perfect.

One thought on “Perfect”