Upon arriving in Leoti, I pitched my tent in the town park (my repair worked!) and went to take a shower in the adjacent mini-hospital. The nurse in charge wouldn’t let me use the shower, presumably out of Covid concerns. (I was wearing better protection, an N95 respirator mask, than the hospital staff. Go figure.)

I was dispatched to the swimming pool where I took a very cold shower. I felt rather like George Costanza when I was done.

I had dinner at the town bakery, where I ate in 2019. When I left for the bakery the skies were partly cloudy when I returned they were black.

I quickly got into my tent then all hell broke loose. Big gusty winds and a mighty rain ensued. I hoped that I set up the tent properly and that it didn’t leak. Yes on both counts.

After an hour I took an Advil PM and re-emerged. I could see the next wave of storms bearing down. Back in the tent I went. Another raging storm came through. My tent held firm and dry. With ear plugs in and eye mask on I fell asleep until 3 a.m. It was still raining, but not inside my little sanctuary.

I arose with the birds and twiddled my thumbs until the town diner opened at 7. It had a big circular table where ten large men gathered to discuss whatever men discuss. Every single small town has this.

Back at the park I was packing up and about to leave when Bob Eakins rolled up. Bob and I met in Monticello, Utah in 2019. He had just finished riding from Sacramento and was DONE, exhausted mentally and physically. It made me wonder what I was about to get myself into. I felt the same as Bob when I arrived in San Francisco.

Bob is riding west to east from Pueblo. I thought he was well to the east by now but he rides relatively short days. A bit surprising considering his relative youth – he’s 65.

After an hour he returned to his motel room and I headed straight west on Kansas Highway 96. Into a headwind of course. I was working hard, curiously taking big gulps of fresh air.

The farms on either side of the road went on forever and the sky was picture pretty with puffy white clouds. Every so often one of the clouds would block the sun and the temperature would drop. Aah.

I arrived 23 miles later in Tribune where I stopped for lunch. Chicken strips and green beans. Fine dining.

Tribune is in Greeley County. I lit out west on 96 and soon passed the small town of Horace. Go west young man indeed.

The wind was more of a cross wind after lunch but I still seemed to be working awfully hard. A reward of sorts came when I left Kansas and entered Colorado. I will Kansas no more forever. (Except on the 50 States Ride, of course.)

In Colorado the road had expansion joints, what every cyclist’s ass hates. Thankfully they didn’t continue for more than a few miles. I was passed by oncoming farm equipment that looked like Transformers.

I arrived in Sheridan Lake, population 88 if you count the pets, and chatted with the clerk in the town gas station/convenience store. She grew up in Towner, which I had passed through a few miles previously. Towner’s population is 22.

On the way into the store I waved to a bicycle tourist coming from the west. He and I are staying at the Sheridan Lake Bible Church which has hosted bike tourists every summer for many years.

My east bound friend is Mike, from Switzerland. He’s a fascinating man. He trekked in Nepal, visited Cambodia and Vietnam, flew to Los Angeles, then flew to Denver where he bought a bike and a Burley flat bed trailer and set out across America. Mike had a catalytic converter business in Europe that he sold in 2005. There’s no future in it, he rationalized. His mother’s side of the family developed the Schindler company, a manufacturing conglomerate. Among other things they make escalators and elevators. I wonder if my 2018 bike tour friend Martin who worked in elevator repair in Switzerland worked for Schindler. It would be an interesting coincidence.

Ernie, the pastor of the church came by and chatted for a long time. He has all kinds of stories about bike tourists who’ve stayed here. Imagine living in the middle of nowhere and meeting people from all over the world.

Mike is camping outside despite the threat of bad weather. He doesn’t like to sleep on the floor. He knows a thing or two about bad weather; he sailed across the Atlantic twice.

For those of you who think I’m a little old to be doing this, Mike is 85.

I barely slept at all last night in my new tent. It withstood high winds and rain. I did not withstand neighborhood noises (the bird calls here remind me of Sydney Australia) and my messed up left knee. Because of the steady climb we haven’t been able to glide much. Just a constant grinding away. Tonight I’m putting in ear plugs and taking Ibuprofen PM. I’ll be dead to the world.

Leoti has a small bakery where the male breakfast burritos and brew coffee. That was enough grub to fuel our morning.

Heading west again on Highway 93, we encountered the same old, same old. A straight road that climbed a one percent grade with uncanny consistency. The calm winds of the very start of the ride soon gave way to 12 – 15 mph headwinds. I decided to just listen to my body. It said 9 mph. And do The Mule and I rolled, well behind Mark and Corey.

They are at the halfway point of their journey. Both are having hand discomfort. Mark taped a kitchen sponge to the left side of his handlebar. Corey fashioned cushions for both hands out of a pool noodle. I am not making this up.

We finally encountered our first east bound TransAm rider today. Adam is from Wales. He started in Seattle, rode to, then up the Columbia River. Then he picked up the TransAm Route. Adam confirmed that the route is open through the Rockies with snow on the ground at higher elevations. As you might imagine he said it was beautiful.

So Mark and Corey are good to go. As for me, I know of one road closure from a rock slide on my route in Utah. I’ll be checking with state DOTs for more tonight.

Along our route we passed a grain elevator along the parallel railroad tracks. I’d have taken a picture of the train waiting to be filled but it wouldn’t fit into the frame. Mark estimated that it had about 200 identical hopper cars.

We took a snack break in Tribune, Kansas. Then hit the road for another 22 miles. Fortunately the wind had died down but the uphill grind still wore me down.

We crossed into the mountain time zone soon after lunch. 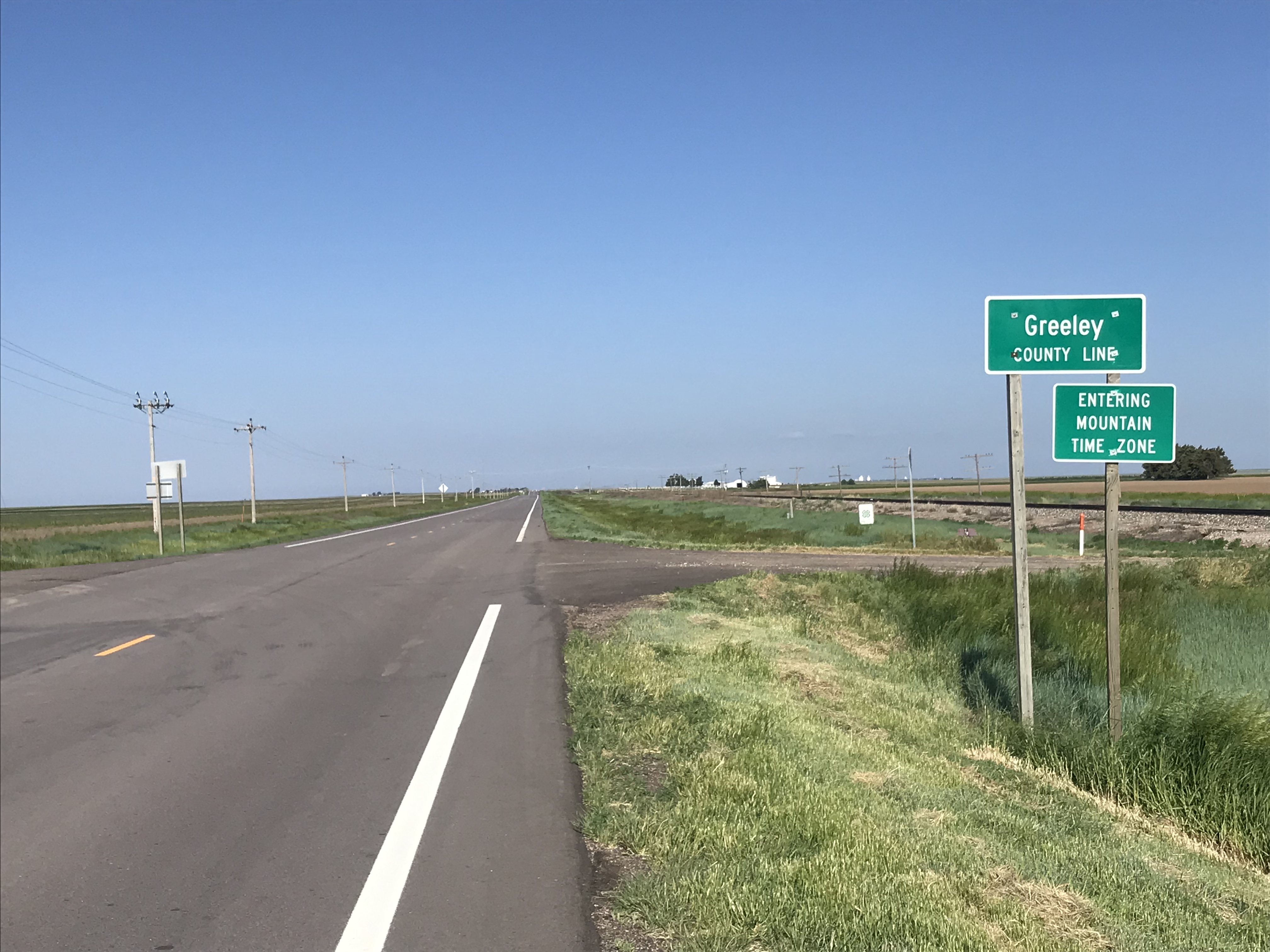 Soon thereafter we posed at the Colorado state line sign.

Tonight we are staying at the Sheridan Lake Bible Church. No showers or bed but air conditioning, bathrooms, and a well stocked larder. No complaints from me.

I haven’t had a day off. Tomorrow we plan on riding only 28 miles.

After a fine Mexican dinner, we retired to the somewhat shabby Derrick Inn. The hotels heyday was at least 20 years ago by the looks of things.

No breakfast was in the offing so I snarfed a PB and Nutella burrito. Sweet T and Fedya left early in pursuit of a 100 mile day. Mark, Corey, and I had more modest plans.

Scott City was 56 miles west. If we felt good, we’d continue on another 24 miles to Leoti,

The day began with calm winds which quickly switched to a strong tailwind. We were riding due west on Highway 93.

I left a bit early and was caught by the dynamic duo after 7 1/2 miles. We then went at our own speeds. Mark hammering, Corey stopping to take pictures, me just cruising along. Depending on the wind I was going 14 to 17 miles per hour. I didn’t even notice that the road was trending uphill ever so slightly.

We stopped for breakfast in Dighton at a bowling alley with a diner. As we rolled into town we could see flags flapping in the wind.

Off we road to Scott City. Wind at our backs. Trucking along. Gradually climbing. On Highway 93.

Scott City had a gas station convenience store so we stopped for drinks and snacks. We decided to keep rolling west even though the wind was now a crosswind from the south.

24 miles. Up. West. Wheat. Fallow fields. Oil pumps. Grain elevators. Wind turbines. (There were few wind turbines in eastern Kansas. Many more out west.) The White line on the road hypnotizing The Mule and me.

We passed a few feed lots. Thousands of cattle gathered for fattening before slaughter. So depressing. 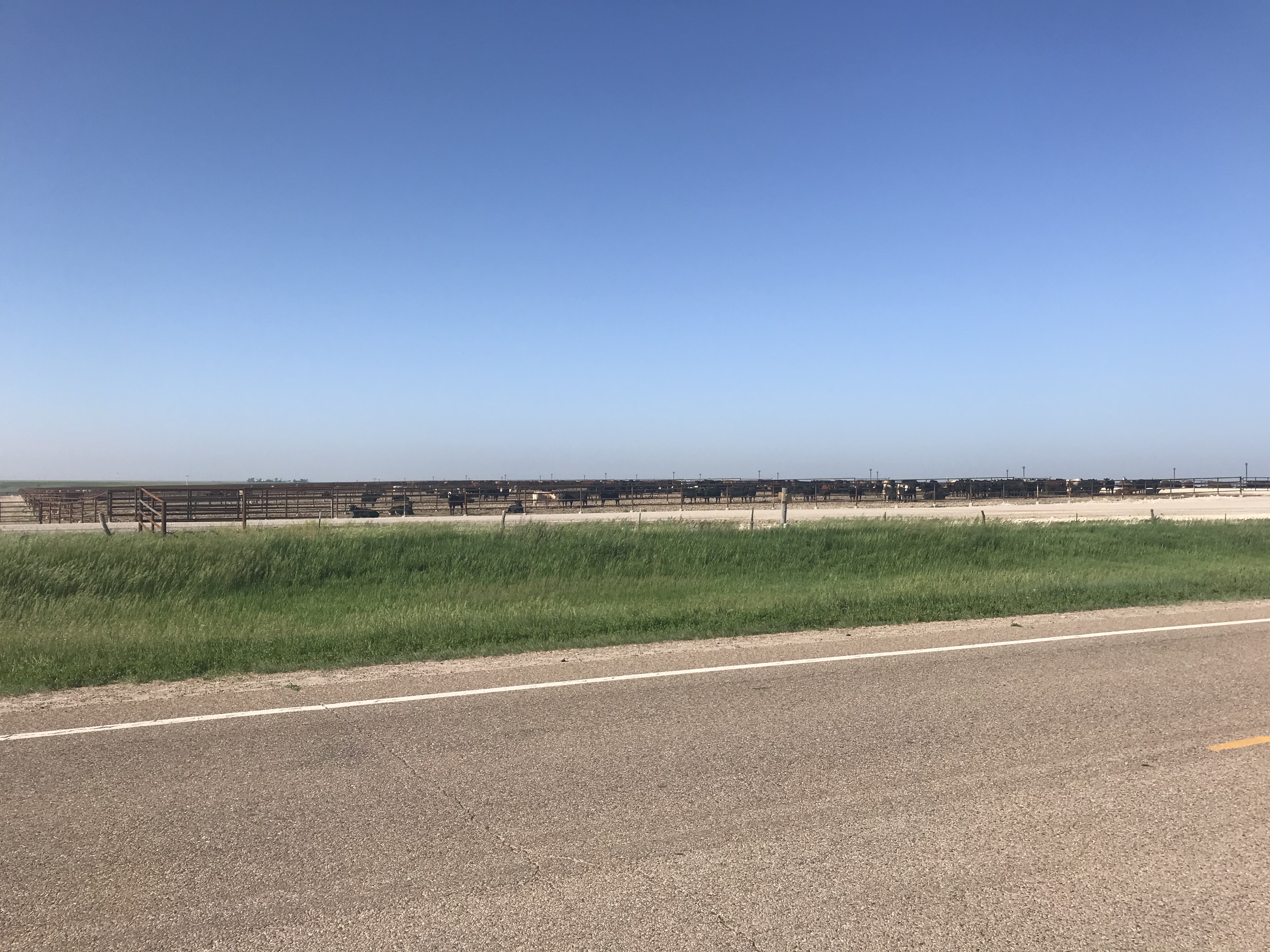 We rolled into Leoti after 80 miles. We simply could not have asked for a better riding day. Tired but not exhausted. After a stop at Dollar General for snacks and supplies (more peanut butter!), we found the town park and set up our tents in the wind. I struggled a bit with my new tent but Mark helped me. (Setting it up sideways into a 15 mph wind isn’t such a good idea.)

We have access to the rest rooms and showers at the hospital next door. So we cleaned up and ate a fine dinner of whatever we had stashed in our panniers. (For me, you guessed it, PB and Nutella on tortilla.)

I am 24 miles ahead of schedule but will be taking shorter days in the next 3 or 4 days to take advantage of free shelter.

We are not seeing any eastbound cyclist. Mark’s friend in Utah says the mountain passes on the western side of the Rockies are still snowed in. In a few days I’ll have to decide whether to chance taking my route west along the Western Express from Pueblo or call an audible and ride north along the TransAm.

We are now at 3,300 feet. Tomorrow we leave the Central Time zone, kiss Kansas goodbye, and enter Colorado.