Spring is fighting off winter here in the DMV. (The DMV is what all the cool kids call the DC, Maryland, Virginia area.) The weather goes up and down betraying any ability to get comfortable. If you want consistency, move to San Diego.

Friday, I woke up super early and rode to Friday Coffee Club. My plan was to see the famous DC cherry blossoms at sunrise. I timed it wrong and the cherry blossoms were a day shy of peak bloom, but the sunrise over the Potomac didn’t disappoint. I stood on the river bank for a few minutes just to take it in. 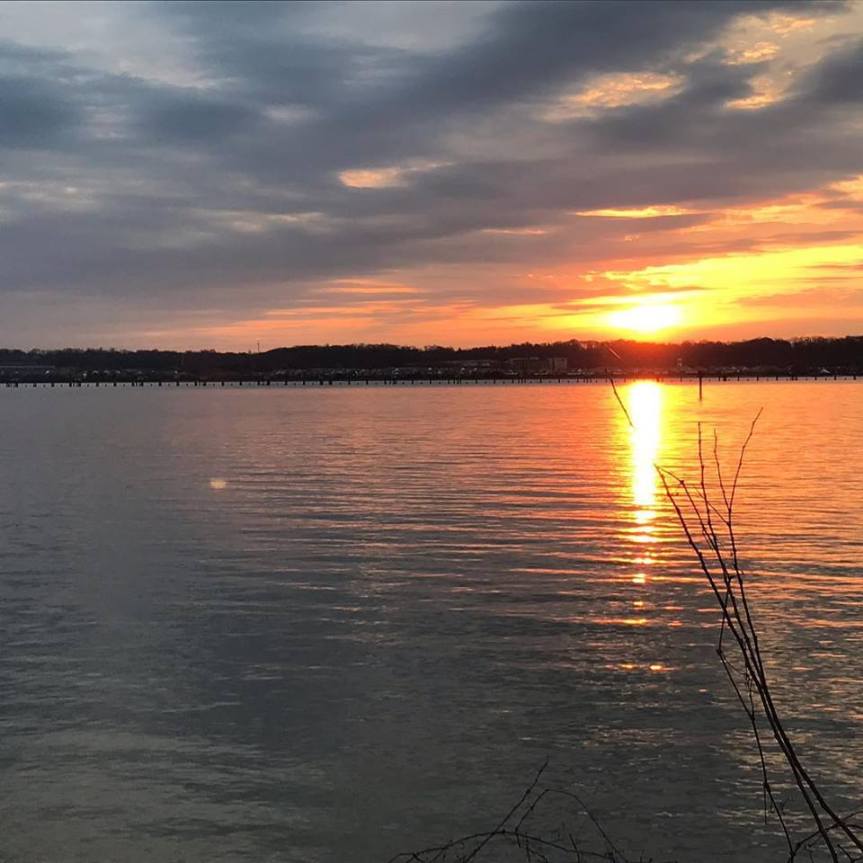 The 14th Street Bridge over the Potomac River reaches the DC side right smack dab in the middle of the Tidal Basin, ground zero for cherry blossom tourist madness. I managed to wiggle through cars and buses and work my way around the Tidal Basin, up 15th Street, and around the Washington Monument, enjoying blossoms the whole way. Friday Coffee Club was busier than usual so all is right with the world.

Yesterday, I rode into DC to see my first Nats game of the season. The temperature during the game was perfect. We sat in the shade just below the TV announcers who were sitting in their perch in the press box. We were directly behind home plate which afforded a pretty good view of the pitches. Throughout the game, the plate umpires inclination to call outside strikes (to right handed batters) strikes was obvious. Somehow the Nats batters didn’t seem to clue in.) 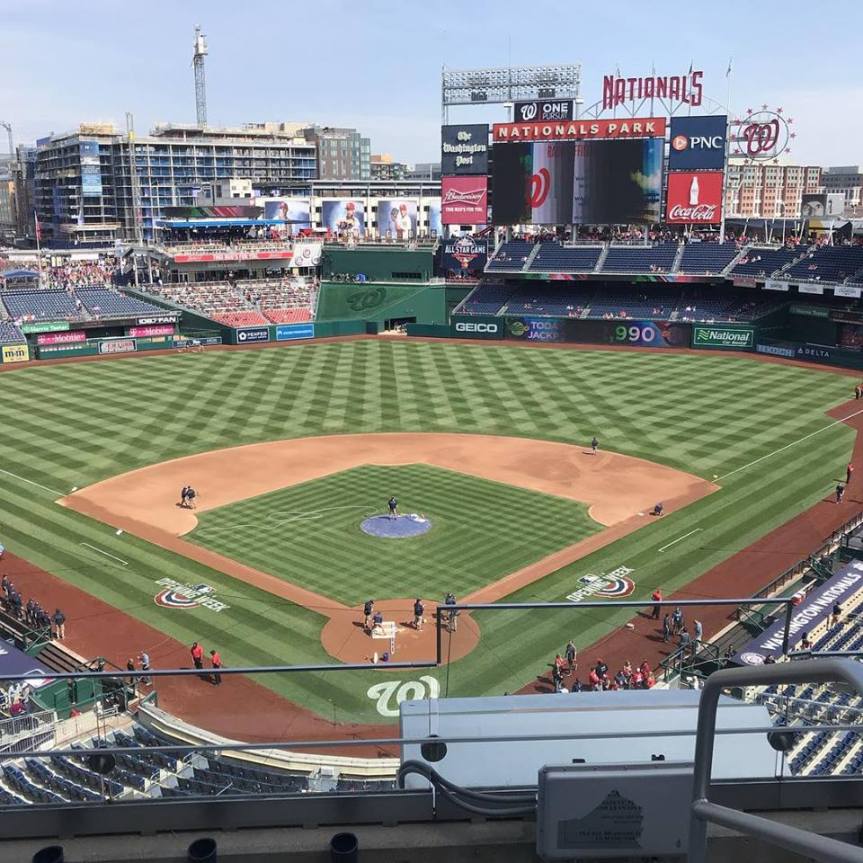 The fans in our section have a tradition of chanting N-A-T-S NATS NATS NATS WOO!!! for each Nationals score. I’ve never been into such organized things at baseball games. Such displays are better suited to football or hockey.

Every so often pedals from the cherry trees outside the ballpark would drift down on us.

My daughter Lily kept score. She’s getting pretty good at it.

During the seventh inning stretch, the stadium played A Ha’s Take on Me, something that was discontinued a few years ago. It was most welcome but the crowd didn’t seem to get into it. The whole point is to hit the high notes for the line “In a day or two.” I didn’t attempt it, which I am sure Lily appreciated.

As for me, despite the scorekeeping and the pedals and the perfect weather and the great seats and the drifting blossoms and Take on Me, I had a hard time getting into the game. It didn’t help that, for the second game in a row, the Mets didn’t win so much as the Nats lost.

In the Friday’s game, rookie center fielder Victor Robles was caught in a rundown trying to score from third base. He thus committed the Nat’s first TOOTBLAN of the season. (TOOTBLAN means “thrown out on the bases like a nincompoop.” ) Beating yourself appears to be a Nats forte. Robles, the centerfielder, also seems to enjoy overthrowing the cut off man, perhaps so we won’t miss Bryce Harper so much.

At least a quarter of the fans present were Mets fans. A throng of them in the left field bleachers chanted LETS GO METS throughout the game. This seemed pointless since it is pretty much indistinguishable from LETS GO NATS. Late in the game as the Mets scored several runs,  a few Mets fans in our section M-E-T-S METS METS METS WOO!!! Well played, dudes.

The ride home featured a fifteen minute delay getting to the Tidal Basin as I duckwalked my bike amid tourists headed for the Tidal Basin. The sidewalks around the basin were absolutely packed with tourists. The roads were packed with cars. Nobody seemed to be having much fun.

I escaped the madness and stopped at the Crystal City garage bicycle races on the way home. I watched a couple of laps of the Anything Goes race. It’s fun to see people, some in costumes riding unicycles, cargo bikes, tandems, fixies, and other assorted contraptions.

I rode home at twilight wearing a t-shirt.

The citizens of #bikedc are agog. The long, cool, wet days of April are behind us. We’re in an honest to god heat wave. Hallellujah.

I took the opportunity to buy a ticket to a night game at Nationals Park. With several hours to kill I rode Little Nellie to DC. My first stop was at the Renwick Gallery. The Renwick is part of the Smithsonian Institution. Admission is free. Yay, America. It is located at 17th and Pennsylvania NW, a couple hundred yards from the White House or, if you have better taste, Swings House of Caffeine, home of Friday Coffee Club.

The Renwick has recently embraced the idea of multi-room art exhibits that visitors can be a part of. It’s the new, new thing in DC these days. The current exhibit contains artwork from Burning Man. Something about the size of these kinds of exhibits make me wonder “What kind of mind thinks this stuff up?” Certainly not my kind of mind. 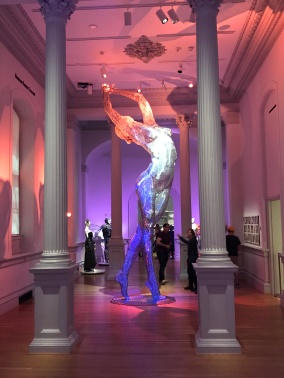 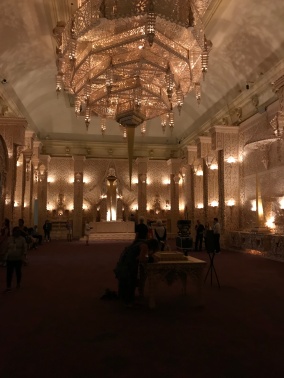 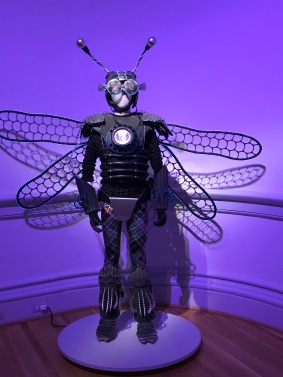 The exhibit continues on the sidewalks in the surrounding neighborhood.

I left the Renwick and rode across town to the REI store. The store is located in the building that was once the Washington Sports Arena, the site of, among many other things, the first U.S. Beatles concert, held two days after an eight-year-old me watched them on Ed Sullivan. 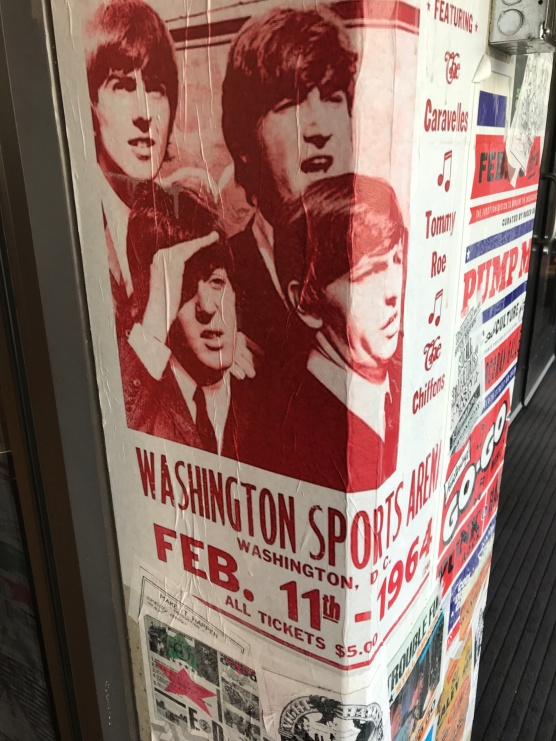 After purchasing some fancy pants (wicking underwear that I find useful for biking and hiking), I sat down for coffee and a cookie. Shopping requires sustenance, don’t you know.

Refueled, I headed for the Anacostia waterfront and Yards Park. Yards Park is part of the rejuvenation of a long neglected area of DC. Unfortunately, development has chewed up big chunks of the park. Still, on a day when the wind is blowing from the south and the sun is working it’s spring time magic, Yards Park is a great place to linger and reflect. I say on a bench and read a National Geographic. 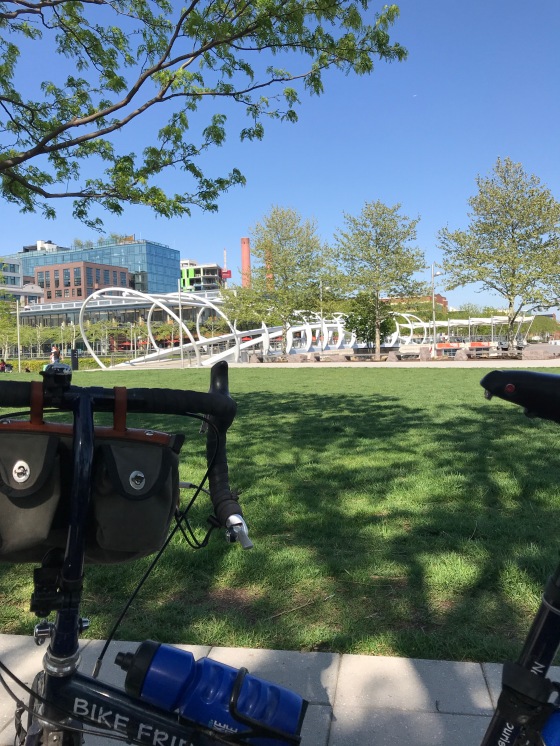 Next up was a ballgame at nearby Nationals Park. Ticket prices were surprisingly low so I bought a seat in the baseline boxes just beyond the Nationals dugout. The game was a treat. After weeks of moribund offence, the hometown team broke out of its funk by scoring 12 runs. They hit four home runs, two of which were Ruthian clouts. The only downside to the proceedings were the pollen (ick) and the heat. After about three innings the heat was getting to me. How will I ever ride across the country if my heat tolerance is so low? DRINK some water you moron! And so I did. I downed about a gallon during the game. 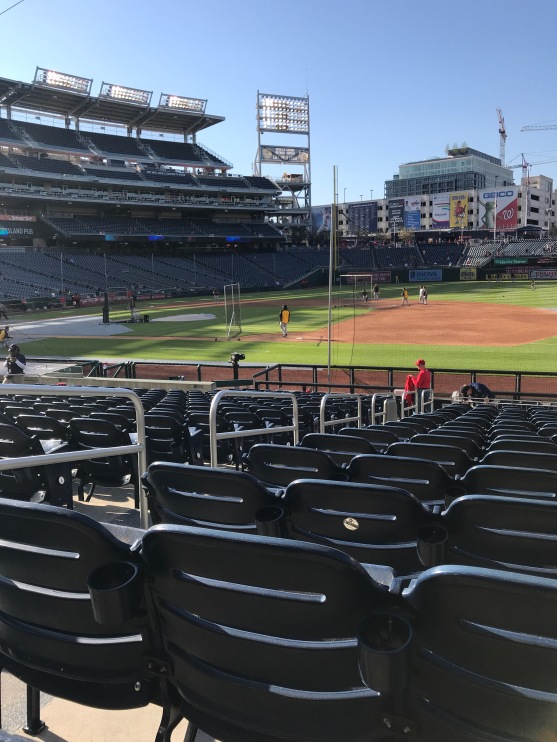 After the game I was rewarded with a glorious ride home in the dark. As I reached the Virginia side of the 14th Street bridge over the Potomac River, I felt the temperature drop several degrees. It declined incrementally for the next hour as I pedaled the final 12 miles home.

So, 11 hours and 36 miles after I left the house my May Day ramble ended.

For more pix from the day, you can check out my Flickr album.