The weather report called for temperatures in the low seventies. I prepared by taking yesterday off the bike, mowing the lawn and doing a number of chores. I waited until I saw a 5 and a 0 on the digital thermometer in our house.

Off I rode on Little Nellie and felt very strong. It was obvious that I had a tailwind. About three miles from home, I passed the Morningside nest and spotted a white head. Hopefully, we’ll have some eaglets soon (if we don’t have them already). A mile further on I looked left as I crossed the Dyke Marsh boardwalk.  The pair of geese I saw earlier in the week were still waddling about. It was a bit troubling that papa goose was on the far side of the Parkway. It would suck if he became roadkill.  (My wife and I once saw a black SUV mow down a mama duck and a few of her ducklings as they tried to cross the Parkway. The surviving ducklings were a sad sight, waddling around in a panic.)

The Mount Vernon Trail was very crowded, which is typical of a warm, sunny weekend day. The tailwind made passing easy. I cruised to the city with surprisingly little difficulty. At Gravelly Point, a plane came in for a landing. A man transfixed by the plane wandered directly in front of me looking up. “YO!” He came back to reality and hopped out of the way.

The tailwind became obvious when the trail curved along the river bank. Little Nellie was a happy camper.

I turned to ride up the ramp to the 14th Street Bridge. Now with the wind in my face, it was time to work a little. Bikes were coming down the ramp in a long line. There was a fence on the left and a highway ramp on the right. There were three bikes in front of me. They stopped. No warning. The two women in front were having a conversation. The guy in the back said nothing. I veered to the left (thankfully there was a little room) and stopped with my front wheel next to his rear wheel. For some reason I blurted out “What the fuck are you doing?” It was louder than intended, perhaps because my expectations of a smooth ride to DC had been dashed. The guy turns to me, objects to my remark and starts explaining the situation (as if it wasn’t self-evident) . While he’s jabbering, I look up and two cyclists are coming down the hill, passing the long line of bikes, straight at me. I turn to my new personal friend and yell, “Move your god damned bike NOW!”

I think this blows my chances at the Cherry Blossom Festival Mr.Congeniality award. And I am sure he thought I am a total asshole. He has a point. I don’t care. Safety comes first.

On the DC side of the bridge, chaos. I weaved through the buses and tourists. I could see that the trees along the Tidal Basin were nowhere near full bloom so I headed for East Potomac Park. Into the wind.

I saw a few nice trees but the whole experience left me frustrated. If I hadn’t lived here for decades I’d swear that this whole cherry blossom thing is a hoax. 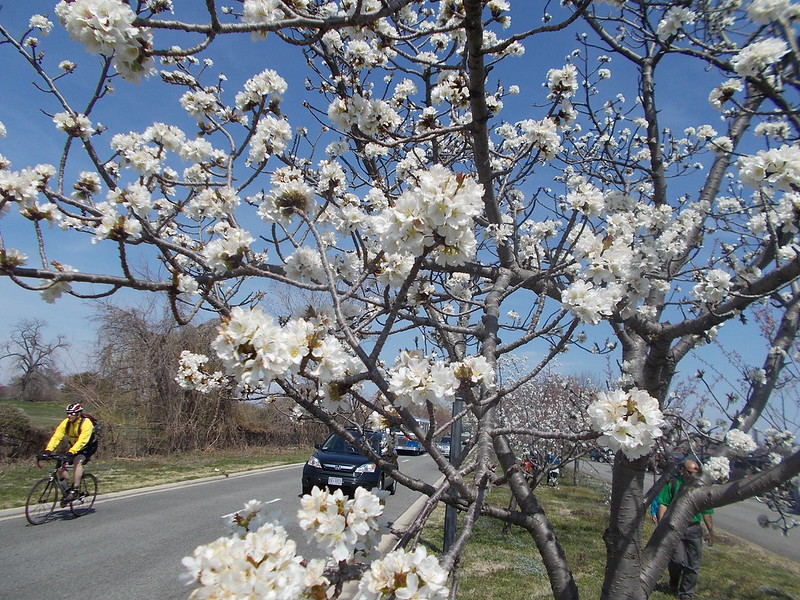 I rode upriver to the Lincoln Memorial, crossing Constitution Avenue through one epic traffic jam. I spotted a Park Service employee helping people cross the street. He just laughed. It was so bad that there’s nothing he could do.

I back tracked on the opposite side of the Mall and past the White House. Pennsylvania Avenue was not very crowded. Cherry Blossoms, even disappointing ones, trump the leader of the free world.

I don’t much like cycletracks but on this sunny day it seemed like the most civilized way to ride through town. All but one turning car yielded to me so I felt safe. At Meridian Hill Park, here were no drums to be heard and no acroyogis or hula hoopers to watch so I plodded up the hill and kept on keeping on. The cycletrack dies out at 16th Street so I took for a ways. At a four way stop, a car behind me went through the intersection out of turn. The car that had been slighted laid on his horn and followed the offender up 16th, passing me. He stayed on his horn for a block until he pulled up next to the offenders who were obviously lost. They exchanged words. The offenders turned onto a side street out of which came a DC police cruiser. The cop pulled over the SUV driver, apparently for making a public nuisance out of himself. I felt bad for him. He won’t win Mr. Congeniality either.

I turned off 16th and found 14th with a bike lane. It ended at a T on Aspen Street. A left turn and soon I was cruising down a series of S curves into Rock Creek Park. This road is part of the 50 States Ride so I have ridden it several times. It is the bestest.

At the bottom of the hill I turned right and headed for Chevy Chase (the neighborhood not the actor). I spent a few minutes on Rock Creek Trestle The creek is way down there.

Reversing course, I made for Bethesda Row and its fine array of eateries. After crossing a busy street the trail makes a hard left turn. The woman cyclist in front of me was wearing the full bike rider kit (matching lycra top and bottom). She clipped into her pedals and seemed to be going at a snail’s pace. As I was about to pass her, she waved me by with her left hand. In her hand was a lit cigarette. Carbon makes bikes go faster, or so they say.

I ate at Bethesda Bagels because it’s good and I am boring. I always eat there when I bike to Bethesda.

Instead of dealing with the Capital Crescent Trail crowds I headed out on the quiet side streets of Bethesda. A right hand turn put me on Bradley Boulevard, normally a busy road but not I had PEDs in my pedals. After passing through Avenel I picked up Falls Road. A left on MacArthur Boulevard had me descending through the woods of Great Falls Park, The windy road is flawed only slightly by the bumpy pavement, otherwise this one rivals the downhill into Rock Creek Park.

I was headed into the wind but the descent made me unaware. At the Old Anglers Inn, I jumped on the C & O Canal towpath for the ride back to DC. Now that I had slowed down, the headwind was annoying. Little Nellie’s short wheel base does not make for a comfortable ride on rough surfaces. I bounced along slaloming among the walkers and runners. I spotted a big great blue heron standing still on a log over the canal. Even with the bumps, the ride on the C & O Canal is a thing of beauty, Except for the gnats swarms. For about four miles I encountered clouds of flying black bugs They don’t bite but they get into everything, your mouth, eyes, hair, ears.  And your whole body gets covered in them. Ick.

After switching over to the paved Capital Crescent Trail, I looked at the Seussian Cormorants perched in the trees along the Potomac. They do this every year, feeding on the fish swimming up river to spawn.

Back in the city, I decided to avoid the cherry blossom scene and the Mount Vernon Trail, I took the Teddy Roosevelt Bridge to the MVT for about a mile then crossed over to the Pentagon. With a stifling headwind, I followed roads past the vast Pentagon parking lots and Long Bridge Park, through Crystal City and Potomac Yards. In Old Town Alexandria I followed Columbus Street, several blocks from the touristy madness. After waiting at a stop light, I started pedaling when it turned green. The car opposite me starting coming through the intersection too. A green taxi coming from the cross street blew through the light. I think the light must have been back lit for the driver. If I had had a tailwind instead of a headwind, I’d have been roadkill. The taxi missed us both.

South of Alexandria, the Mount Vernon Trail wasn’t crowded so I hopped on it and slogged into the wind.

At home, I took inventory: my hands hurt. my back hurt. my arms hurt. my knees hurt. My face and thighs burned.

For some pix check out my Flickr page here.