The weatherman was calling for temperatures in the high 50s. There was just one thing to do. Go for a long ride. Justin, John and Ryan were going to ride a 60-mile loop from DC to Alexandria to Prince Georges County to DC. I was going to join them but between my bad back, my late return from picking up my daughter at BWI and a profound sense of sloth, I opted out.

Instead I headed out to run some errands as part of the 2014 Errandonnee Challenge. After doing some yoga and mastering the day’s crossword puzzles, I hopped on The Mule and headed to Old Town for some exciting banking action. Not knowing if the Mount Vernon Trail was ice free I took side streets all the way to Alexandria. The hills that I encountered did not much bother my back which is still beset with random nerve pains.

Once the banking was done I headed to Haute Dogs and Fries, a rather ambitious little hot dog place at the north end of Old Town. I had a Fenway Dog and an Haute Dog with some fries. It was most scrumptious. On the way out I checked my Twitter feed and saw that my friend Rachel (Don’t Call Me, Bob) Cannon was feeling lonely at her job at a nonprofit used bookstore in DC. Since I like Rachel and books and had nowhere else to be, I decided to be there. I happened to glance at the menu board on the way out and saw that they sold Whoopie Pies. I figured Rachel could use a little Whoopie in her day and procured one.I chose the red velvet pie over the Guinness pie because a Guinness Whoopie Pie would make me hurl. (I am a thoughtful gift giver.)

Once the Whoopie Pie was safely stowed in my handlebar bag, I was off and riding. The Mount Vernon Trail is notorious for being congested on nice days and today was no exception. Once onto the 14th Street Bridge I had a brief reprieve before riding into thick swarms of tourists. Maybe that should be swarms of thick tourists, but either way there were a lot of them.

I made it to 17th and K Street in DC and could not find the bookstore. After a few tweets to Rachel and some Google mapping I found it. I tied up The Mule next to Rachel’s new green Surly Disc Trucker, a touring bike to die for. I had bike envy. Rachel bought the Surly after being run over by a car in Prince Georges County last December. It’s nice to see that some good came out of what was probably a horrible experience.

As readers of this blog know, I think Rachel is pretty darn cool. She’s a grad student, snail wrangler, DC bike tour leader, bike rack installer, book store clerk, kitty saver, and erstwhile sitcom star all in one. We talked a blue streak for about an hour. We solved global warming, the Ukranian and Venezuelan Crises, and acute Nutella addiction syndrome. 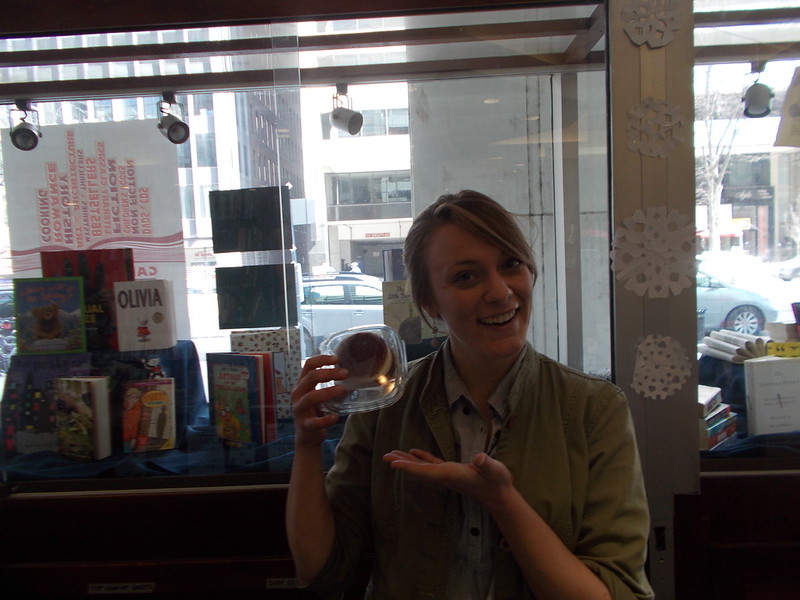 Before I left I bought a book on her recommendation. I did a little browsing and saw that this store is one that I have to come back to with an empty pannier or two. In addition to books they sell CDs and DVDs. Even with the low prices, I could spend some serious money at this place. The store is called Carpe Librum. It is owned by a nonprofit called Turning the Page. Proceeds from sales go to benefit DC public school students and families. They accept donations of old books, CDs, and DVDs so I may actually take them some of mine in the future.

As I was leaving the bookstore, I checked my Twitter feed and saw that Ted was riding at Hains Point along the Potomac River about a mile away. Hains Point is on the way to the 14th Street Bridge so I headed over to see if I could find Ted. Sure enough, I wasn’t there more than ten seconds when I saw him on the road ahead. We did two 3-mile loops down to the point together. The weather was pretty darn splendid.

After leaving Ted, I crossed the river and headed for home on the Mount Vernon Trail. It was even more congested than earlier but I had a nice tailwind and the views were hard to beat so I stayed on the trail. Once clear of Old Town the traffic on the trail thinned out. I saw a photographer at the Morningside bald eagle nest so I stopped to check things out. I didn’t see the nest but a man and a woman came running toward me. As they approached I realized the woman was Kate, a friend from my former job. She and I worked an Earth Day event one year. I have tried to get her into cycling but she prefers to huff and puff up hills on her own two feet. To each his own. We had a brief chat and went our separate ways.

My odometer registered 40 miles as I pulled into the driveway. 60 degrees, 40 miles, 3 friends and 3 errands. My work here is done.

Category: Store other than a grocery store

Observation: You do mobile banking your way, I’ll do it mine.

Observation: If you call hot dogs, Haute Dogs shouldn’t you Frenchiy the “dogs” to so you get Haute Chiens? Mais oui.

Category: Library (cause a used books store is pretty close to being a library)

Observation: If I lived close to Carpe Librum, it would make sense to just move in. What a find! Thanks, Rachel.