I normally sell some of my leave back to my employer. It’s a good benefit for sure but this year I decided to use it all. I thought I had it all planned out. One week off for my tour. A few days here and there for hikes and baseball games. Then a bunch of time off for my once-in-a-lifetime vacation in Australia/New Zealand/Thailand.

Somehow I ended up with 40 hours of vacation time. So I took a day off last week and took this week off.

Since Mrs. RC has to work (her biggest annual deadline is tomorrow), I am staycationing. The holidays and rain have conspired to keep me off my bike for several days so yesterday and today I got the Cross Check out on the neighborhood streets.

I live near Mount Vernon next to a horse farm. Sounds kind of nice doesn’t it? Well, I live closer to US 1 than the Potomac River and the horse farm is a mud pit and a dump (literally, they seem to dump old equipment along the farm’s perimeter).

One nice thing about it is that there are five traffic lights between my house and the Beltway, a distance of about five or six miles. Most of the streets are quiet neighborhood streets. If I want more I need only ride down past Mount Vernon where there are many more miles of suburban streets with only two traffic lights. And for the hell of it I can ride 1 1/4 mile loops in Fort Hunt Park.

So I took advantage, paying special attention to climb some hills, something I avoid with great dedication. Yesterday’s jaunt included riding up to Oxon Hill Road from the Wilson Bridge. This is a mile-long slog but the ride back down is pretty sweet.  I also picked off the Park Terrace Drive hill, which I once used daily to prepare for a tour. The rest of the hills were not too hard.

Today’s ride featured the Regent Drive Hill which climbs above the Park Terrace Drive hill. Most cyclists just avoid this one because its more bad. Another fun hill that I typically avoid is Belle View Boulevard which climbs Beacon Hill. Not today. I rode up that sucker.

In between bouts of cycling masochism, I rode some flat-ish streets. One of them is East Boulevard Drive which runs on the opposite side of the GW Parkway from the Mount Vernon Trail. Today I saw a giant construction machine chewing up a house. It was a big house. If it were in good shape it would sell for nearly $1 million. Whoever bought it decided that some new monstrosity would better suit its massive lot.

In Old Town I spent five minutes taking pictures of polar bears in a tree and this faded sign on a brick wall. I love these old signs. I recall one from my childhood for the soft drink Moxie on the side of brick building in my father’s home town.  I also like Mail Pouch tobacco signs on barns in the Midwest. They almost make you wish tobacco was as tasty as chocolate. 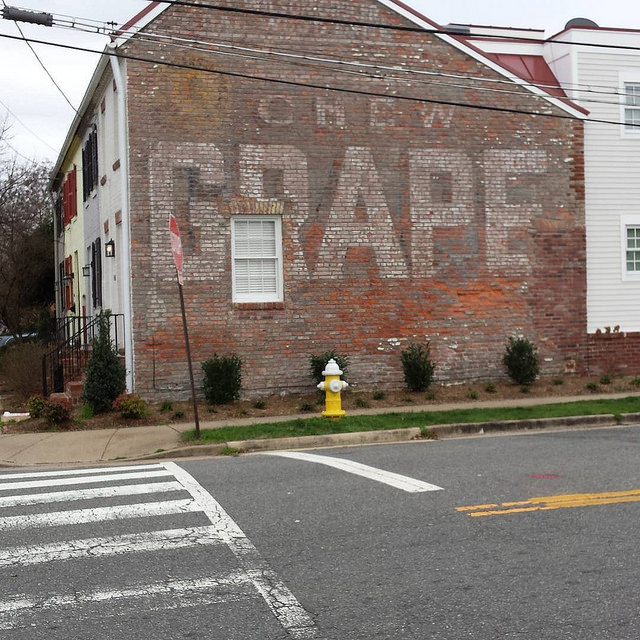 So Chew Grape. It’s good for what ails you.