If I were a bike riding stud, I’d be writing this from Charleston WV. But I eat quiche so I am about 70 miles away in Andrews SC. It’s hot and humid and I found a motel with AC. End of discussion.

I cobbled together a breakfast of sorts in the motel lobby and headed out. The bridge of doom beckoned. First I had to cross to the oppposite side of an extremely busy 4 lane highway. I rode away from the bridge. Traffic on my side stopped for some reason. I ran my bike to the center turn lane and started riding further away from the bridge until a break in the bridge bound traffic occurred. Then I rode to the far shoulder and did a 180.

Bridge bound! Alive! Then the shoulder gave out. Luckily so did the traffic. I made it across the span and darted back to the shoulder. Whew!

In town I bought some peanuts and pop tarts for the road and headed out. The relative humidity was absolute. So was the truck traffic. Good thing the rumble strips were there at the edge of the road to make my misery complete.

I stopped to take a picture that the Friday Coffee Club will enjoy. 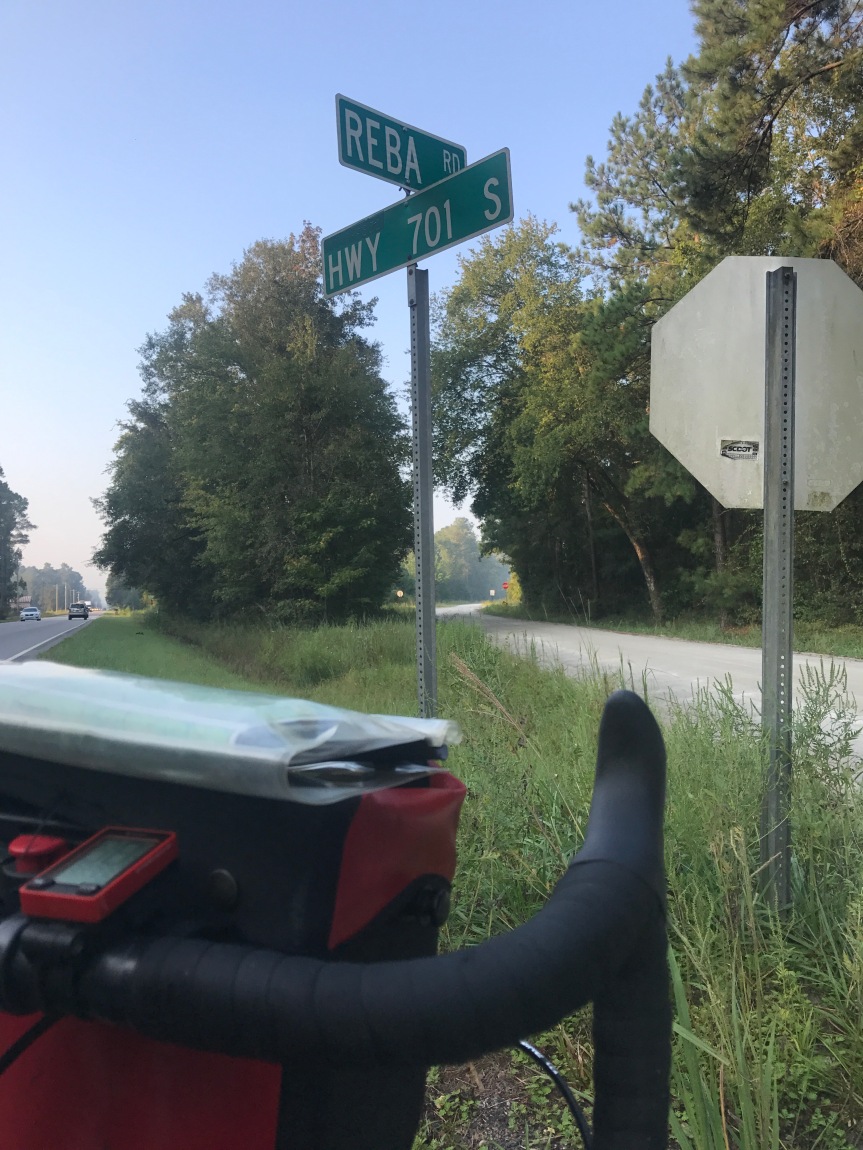 My road bound stress was occasionally relieved by crossings of streams and wetlands. The water is black with tannins from the trees. I’d have stopped to take a picture but the dump truck drivers would have disapproved.

After going through Yauhannah, I saw a truck approaching on the two lane road I was on. A sedan pulled out to pass the truck. It kept coming in my lane without the slightest recognition of me. I calmly pulled off the road and looked at the driver. She had a calm expression that suggested this was her normal way of driving.

To be honest the drivers here have nearly all been patient. I’ve been honked at 3 times in 10 days. My worry is the 1 in 1,000 driver who doesn’t care or can’t drive worth a crap.

Outside Pleasant Hill I stopped at a roadside grocery store. A large gray haired man came out and started chatting with me about my tour. I went inside and there were three more men solving the world’s problems. (Andrea, I swear it’s the same four men. They move around the US to amuse bicycle tourists.)

The next five miles were actually pleasant. Light traffic allowed me to ride down the middle of the country road.

Until the next stressway appeared. This time with a mile long construction zone. After I cleared it, I pulled over to let the cars and trucks go by.

At this point the humidity had given way to a blast furnace. I was totally comfortable in the shade but I fried without it.

I arrived in Andrews and checked out the only motel within miles. Bed, AC, shower, TV, WiFi. Home for the night.

After doing some personal business on the phone, I rode back into town and a a chef said and a gallon of Diet Pepsi.

Next up, I’m going to scout out some dinner to bring back to the motel.

So about 55 miles on Day Ten. My total is now 717.5. As the old Bubba at the roadside grocery noted I’m not even half way.

That noted, even with the traffic stress and the heat and humidity, I’m now getting into this tour in a big way.