My friend Josephine puts together theme rides occasionally. She did one all about George Washington earlier in the year. Today’s ride wended its way around Alexandria Virginia in a tour of the city’s murals. These things are intended to be intimate but this one caught on. The participants were split into four groups. I started with the third group and ended up with the second group. 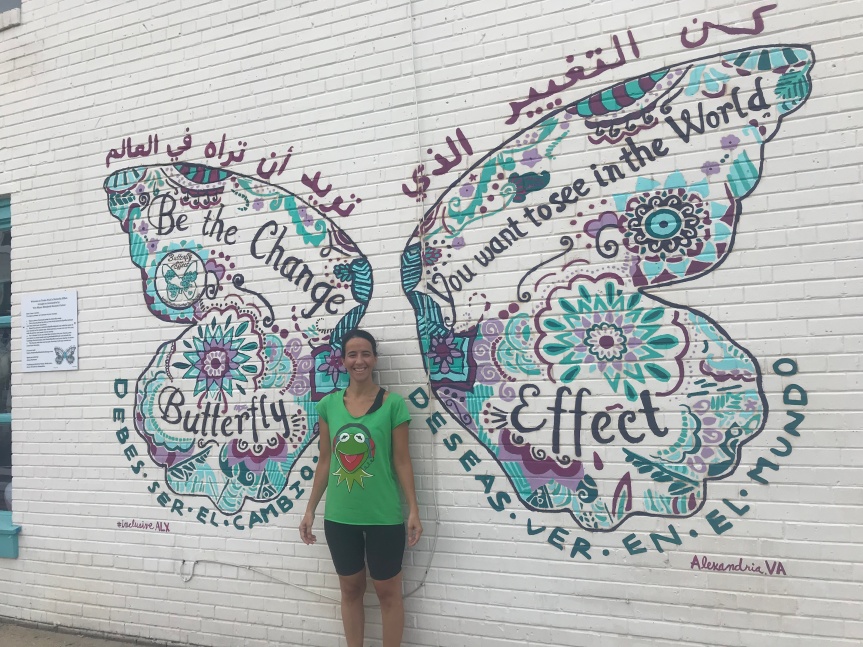 The last time I knew this many people at a bicycling related event, we were mourning the death of a friend. It was pretty nice to see people without tears for a change. I ended up riding with Yasmeen, a friend from social media that I met for the first time at last week’s Friday Coffee Club, and Emilia, a native Venezuelan who rode the 50 States Ride with me in 2014 and 2017.

Because of the large turn out, the ride began late. The narrow streets of Old Town kept the pace to a crawl. At each mural, I had Emilia pose for a picture. I didn’t realize until I got home that she was posing in character for each one.

Once through Old Town we made our way to the artsy Del Ray neighborhood. It’s thick with murals, on businesses, houses and public buildings. Along the way, and despite riding at 7 miles per hour, we got ahead of our group. So we tagged along the back of the group in front of us.

After Del Ray the ride goes about six miles to the West End of the city for one last super long mural. It was nice to stretch my legs out. I love riding with Emilia but a recurring theme of our rides is my ignorance of Spanish. My friend Chris who is fluent in Spanish pulled up along side her and the two had a yak fest in Spanish.

After the West End mural we rode a couple more miles to Port City Brewing where the ride ended and the bike and beer crowd could wet their whistles. Many of my friends don’t drink much if at all so they took off. I had a beer last night at the ball game then rode home in the dark. This resulted in a late bed time. A beer a little afternoon would have been the death of me. So I rode the 7+ miles home. Ate lunch. Turned the ballgame on the radio and fell fast asleep in my comfy chair.

Not a bad way to spend a Labor Day Sunday.

Thanks to Josephine and all the volunteers who made this happen. Thanks also to my riding buddies Yasmeen and Emilia.

As a reward for posing, I gave Emilia the camo shirt I picked up at the game last night. I don’t think it goes with the Kermit shirt though.

A full set of my Emilia and the Murals pix can be found on my Flickr site.

One thought on “Murals of Alexandria Ride”