I decided to work from home today. I made the decision a week ago. The weather was perfect. Shorts and t-shirts in early March. Enjoy climate change while you can because its’ gonna suck when all those tropical diseases work their way north.

At lunchtime, I decided to go for a quick ride. My first excursion was 1 1/2 miles on The Mule to test out the work done by Spokes Etc. last week. I was a little worried that the chainrings, which I chose not to replace, might not play nicely with the new chain. No worries. The bike is much faster now with a bottom bracket that isn’t rusted and brakes that don’t stick to the

Once that was taken care of I planned to go for a quick jaunt on my Cross Check which I haven’t ridden in months. Off we went. Then I felt the saddle, a Brooks Flyer made of leather, wobble. I took a look and found that the tensioning bolt was bent. This meant that the bolt could snap at any minute. I tried tightening the bolt and headed out for a ride anyway. I made it about a mile from home when the bolt snapped.

I sent it to a bike shop in Seattle that repairs Brooks saddles. They repaired the saddle on The Mule and they did a good job.

I put the Flyer saddle from Little Nellie on the Cross Check because I am taking Little Nellie in for service on Saturday. I put a Brooks B67 on Little Nellie just to keep the seat hardware in place.

I began the day by riding a couple of miles to the stone bridge on the George Washington Memorial Parkway to watch the annual 10 mile road race. I didn’t properly know anybody running. I knew a friend of a friend was running. That was it. The spectators on the bridge with me were cheering and yelling at the runners.  I didn’t see the friend of a friend. I doubt she recognized me. I did see one of my regulars from my bike commute. She’s a runner that recently had a baby. She was MOVING! I yelled, “GO MOM!” I don’t think she knew I was yelling at her though. After the race I learned that @ultrarunnergirls running buddy Teresa had run. Never saw her either. 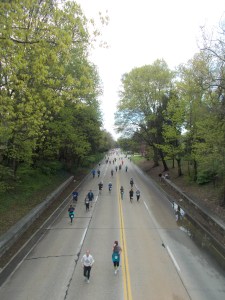 I rode home after most of the runners had gone past.

Then I put The Mule on the car and drove to Spokes to buy the Surly Disc Trucker. After I posted yesterday about my buying excursion, I received tweets from several people who are really happy with their Surly bikes.

The reason for bringing The Mule was to compare dimensions with the new bike and to cannibalize parts. As soon as I put the bikes side by side I saw a problem. The Disc Trucker was the same size as The Mule, 56 cm. I test rode it two times. With the saddle that came with the bike, it was a pretty nice ride, especially after we raised the handlabrs a touch. Past experience says that my bottom only wants to ride on leather. When I put my Brooks Flyer leather saddle on it, the ride became uncomfortable. I could not get the Flyer’s seat back far enough. This is exactly the problem I’ve had for 24 years with The Mule. After trying to tweak things to make the bike work for me, we gave up. Both the sales clerk and a mechanic agreed that the bike was a tad too small. They will try to locate a 58 cm bike. In the meantine I’ll be riding The Mule from Pittsburgh to DC.

Suffice it to say, I am really frustrated and disappointed. Never the less, it’s worth it to take a few weeks to make sure I can get a better fit with a slightly larger frame. Lord willin’, I’ll be riding this bike for a decade or more.

A short while ago I did a ride with my friend Florencia. I had a good time. Most of her had a good time. Her bottom did not. Her saddle is pretty much shot. It offers little support and is fraying all over the place. Ow. While I was messing around in the midwest, Flor and her friend Emilia rode to Harpers Ferry and back along the bumpy C&O canal towpath. Emilia rode a hybrid with wide-ish tires and a decent saddle. She rode the 120-mile ride with a big smile on her face. (If you are reading this Emilia, you are definitely ready for your first 50-States Ride next month.)  Flor not so much. She rode her road bike with its skinny tires and the same old saddle. OW!  At one point she even wrapped her saddle in what looks like a jacket of some sort to give her some cushion.

Flor’s misery got me to thinking about the saddle on Little Nellie. It’s a Brooks Flyer, a leather 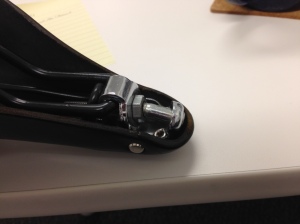 saddle. You’re supposed to keep the leather taut by tightening an adjusting bolt on the underside of the saddle’s nose. I didn’t do this on The Mule’s saddle and the bolt bent rendering adjustments impossible. Well, long story short, the same thing happened on Little Nellie. If you look closely you can see the bend in the bolt as it extends from the nut. Today I sent the saddle off to Aaron’s Bicycle Repair in Seattle to get the bolt replaced. They did an excellent job doing the same repair on The Mule’s saddle.

As it turns out, I have two bikes and four Brooks saddles, three Flyers and a B67. So I put my third Flyer saddle on Little Nellie today. The ride in was pretty nice. The saddle being relatively new was firmer but I had no discomfort. I rode to work in my usual trance only to be startled by Chris M. speeding by in the opposite direction. “Rootchopper!” (I am so glad I don’t use an off color Internet name.)  I met Chris on last December’s Cider ride. After seeing Chris I climbed up to the Rosslyn Intersection of Doom. It nearly lived up to its name today. I took my usual left across the I-66 ramp. The light facing the ramp traffic was red and had been for a few seconds. The driver of the car in the right lane stopped and made no attempt to take a right turn. The drivers of two cars in the center lane however blew through the light and made right turns. They didn’t come close to hitting me only because I always assume that drivers will ignore the light. One of these days this kind of thing is going to get someone killed.

From the looks of the weather radar I thought I might get wet on the ride home. It seems the radar display is delayed a few minutes. Either that or the storm moved really fast between my last peek at the radar and my leaving the garage at work. I left the garage in a light rain which gave way heavier and heavier rain. It didn’t quite reach full on downpour status but I was soaked to the bone within a mile or so. Riding in the rain is pretty simple because once you get wet, you’re wet. Nothing to it. Cyclists and runners took cover under the 14th Street Bridge and the US1 access bridge at National Airport. Message to these cyclists: if you are wet and you stop, you will be cold and wet. If you are wet and you ride, you at least will generate some body heat. I kept riding.

The rain let up near Old Town which was a good thing since the rainwater had gotten into my eyes making them sting. I was riding blind for a while. I’ve often said that I’ve ridden the Mount Vernon Trail so often I could ride it with my eyes closed. I proved myself right tonight.

About two miles from home, the heavens opened up with roars and flashes and buckets of rain. By the time I got home, I was soaked to the gills. I normally ride across the lawn into my backyard. Because of mud and wet grass I dismounted on the front lawn. As I did, I spotted what looked like a clump of sod near where my foot was about to land. It wasn’t sod; it was a box turtle. My yard is a zoo.

Finally, a note about last night’s commute. I was 1/3rd of a mile from home, slogging along at my usual 12 mile per hour pace when a pack of riders (probably doing the weekly Potomac Pedalers ride in my neighborhood) passed me so closely that they forced me into some damaged pavement on the edge of the road. They gave no warning. A less experienced rider could easily have crashed. To the riders in the pack I have this to say: If you want to ride like a bunch of hyperagressive douche bags, do me a favor. Ride somewhere else. I don’t need the aggravation. Better yet, why don’t you chill out, call your passes, and give other traffic a little room.