I did another ride among the eagle nests today. My ride to Old Town took me past three nests. None had eagles near them. I rode through Old Town and back, mostly to make sure there was no ice on the trail. (There was a big icy section of the Mount Vernon Trail in the shadow of the Woodrow Wilson Bridge in Jones Point Park last night when I came home. It is all melted now.)

On the ride back south, I spotted what I thought was a bald eagle near the first nest at the Belle Haven Country Club. I took several shots before I realized that it was an osprey. Both birds have white heads but ospreys have white chest feathers and are thinner and smaller.

I rode about a mile farther south and came upon the nest just past Tulane Drive. It had a bald eagle standing guard.

This is the nest that I saw two eagles at last week.  Unfortunately, this bald eagle was not a cooperative one. It kept its back to me the entire time I was watching it. Most of the time I see eagles around here they are facing the river. Today was the same. The nest is fairly large as you can see (most of it, at least) in the lower right picture.

I continued riding south to the nest at Morningside Lane. This nest, about a half mile from the Tulane nest, looks abandoned. It may have lost part of its structure as it seems asymmetric.

I rode on to the Fort Hunt nest a couple of miles farther south. This nest is across the GW Parkway from the river. It is massive. I have seen one of its residents perched in a tree right above the trail on a few occasions but today was not one of them.

So I went 1 for 4 with an error. Not bad for spring training.

It’s been kind of depressing around here. Cold rain for a day and a half. I spent an hour doing yoga and tweaked my back in the process. Around noon, the rain stopped and I walked outside into 60 degree air. Damned nice for January 4.

I was out of the house in no time, wearing a compromise of my rain jacket and mountain bike shorts. Shorts!  Yay!

I had no place to go and I wasn’t in a hurry to get there so I took my time on The Mule. As usual, I ended up on the Mount Vernon Trail headed north toward Old Town. For such a nice day, the trail had very few people on it. Near Belle Haven Park I spotted an osprey in a tree. They look imposing until you see one beside a bald eagle.

I rode through Old Town and re-connected with the MVT. North of Daingerfield Island I stopped to chat with Ryan. He was riding his Salsa Vaya which made me jealous. Disc brakes. Nice fenders (instead of the crappy old ones on The Mule). I want one. Sadly it would be redundant. 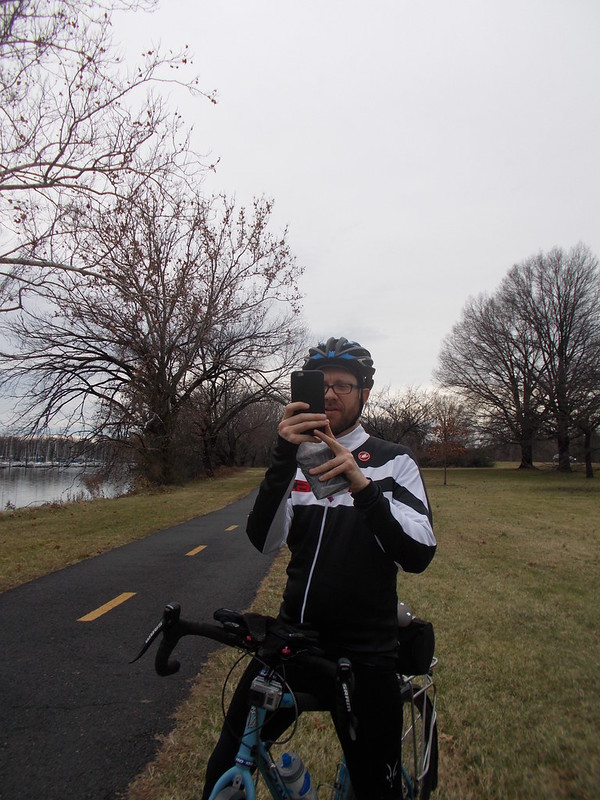 After chatting I made my way over to Del Ray and cruised Mount Vernon Avenue. Del Ray was a dump when I first moved here now it’s rejuvenated.

Instead of yet another ride on the MVT I chose to ride Fort Hunt Road. It’s hills didn’t bother me in the least. My back was doing great. As I rode a black Honda Civic passed going the opposite way and beeped at me twice. I have no idea who it was.

I cruised home despite the warm weather. Time to get together with my daughter on her last night home from college. Tomorrow the nest will be empty and work gets real again.

To Whom It May Concern:

It’s mid-April. In Washington DC. I froze on the ride to work this morning. Can we have our spriing back?

I wouldn’t have froze if I broke out my jacket and holey sweater but I didn’t. It’s the principle of the thing.

The ride in aboard Big Nellie was tearful. The cold on my eyes made me tear up like the end of It’s a Wonderful Life. Zuzu’s pedals!

I saw four regulars on the way in: Three-Step Runner, Hoppy Guy, Nancy One-Bag Duley, and French Braid Girl. They are always going the opposite way. I wonder if they don’t get together for coffee at my house after I pass them. There are others I see nearly every day, but they aren’t distinctive. Nancy may get renamed Wave Crash because she waves so enthusiastically I am afraid she’s going to crash.

Along the way I heard a peep-like sound over head.  Riding a recumbent makes it much easier to see things high up. The peep came from a hawk of some sort, perched on a branch of the tree I was passing under.

When I came off the second flyover bridge at National Airport, I spotted three big birds circling over Roaches Run, a little inlet on the opposite side of the GW Parkway.  It looks like a big pond. It was hard to get a good visual fix on the birds, then, suddenly, one took an awkward dive to the water. Dang, that’s a hard way to get breakfast. I think they were ospreys.

I came to the Gravelly Point parking lot and some military folks were doing some sort of timed run. I came to their finish line just as two runners were finishing. They were so focussed on their time that they blocked the entire path. I slowed to a crawl until everyone realized that what my bell was for and they stepped aside.

It was considerably warmer for the ride home. Another osprey was stalking the fish in the Potomac near the 14th Street Bridge. I stopped to take a picture of the scaffold on the Washington Monument.  Several years ago a scaffold was erected on the monument to allow workers to do maintenance. We had an earthquake a couple of years ago so more work is needed. Up goes the scaffold.

I spotted a man on a bike with big fat tires. I wondered if he could ride at a decent pace. I looked away for a minute and he was long gone. Later I saw him crossing the GW Parkway south of Alexandria. It looked to me as if he had an electric motor in the rear wheel. Cheater.

Put one of those bad boys on the back wheel of Big Nellie and we’ll see who’s boss, punk.