I am going hiking tomorrow and have three medical appointments on Wednesday so I figured I might as well take today (Monday) off and get a five day weekend out of the deal.

The shifting on my new Cross Check was sloppy. It was starting to annoy me even though this is expected as the chain stretches. I could have fiddled with the little dial adjuster thingie for a few minutes and fixed it myself, I suppose. That would be rational. That would not be me.

I bought my Cross Check at Bicycle Space in DC. As part of the purchase, they will tweak your bike’s gears and brakes for a year after purchase for free. Good deal. So I hopped on my bike and headed into town along the nearly empty Mount Vernon Trail.

It was a nice ride except for the inferno part. Dang was it hot!

The ride went smoothly. It’s fun to ride a brand new bike over familiar terrain. I was taking it easy and still going significantly faster than when I ride my other bikes. This Cross Check is an animal.

As I suspected from riding with Katie Lee and her Cross Check, this bike shines in traffic. It is so much more agile than my other bikes and it’s wide-ish tires eat up the bumps in the road.

The good mechanic at Bicycle Space on K Street tweaked my gears and showed me a peculiarity of my shifter. We traded names and, true to form, I forgot his within about three blocks. He was a very nice guy. So, thanks Nice Guy.

I decided to meander around town for a bit. My friend Emilia teaches at Mundo Verde, a bi-lingual (Spanish and English) charter school with a focus on sustainability. I decided to go check it out. I should have taken a picture. It was muy bueno. My boss and a co-worker send their kids there. They tell me that the teachers are muy bueno too.

As I rode by, some people were sitting on the lawn in front of the building. It looked like some teachers were getting organized for the coming school year. This must be an exciting time of year to be a teacher.

I circled back and headed west across town on O Street which is a pretty quiet route to take considering it’s only a few blocks from downtown. At 11th Street I turned north. This was another quite street. I guess everyone must be working. What’s up with that?

I took a left on Euclid and rode over to Meridian Hill Park, which was featured on page 1 of the Washington Post today. The park is in two big tiers. The top tier is an open rectangular field with shaded areas along the longer sides. This is where the drum circle is and where circus of slack lining, hula hooping, acroyoga-ing folks hang out on the weekend. From the edge of the top tier, you can look down on the cascading water feature of the low tier. Whoever designed this was a genius. It is just stunning. A public sector thing done amazingly right.

After chilling in the park, I headed down 16th Street. A driver from Virginia nearly sideswiped me about a block before he made a left hand turn from the right lane. Some people simply should not be allowed to drive.

I slalomed through the tourists near the White House with aplomb. Actually, it was with a bike but I don’t get to use the word aplomb often.

ss the river and down the MVT rode I. Instead of mindlessly riding straight home, I made my way over to Del Ray where I had had a root beer float at the Dairy Godmother ice cream shop. It was gone within minutes. Darn tasty.

Back on the bike, the heat of the day was starting to wear on me. I rode to Old Town to buy a postcard for the August Post Card Challenge.

On the way home I decided to chow down on some tater tots so I headed to Del Ray Pizzeria‘s Belle Haven location. (I could have simply gone to the Del Ray location. It’s only three shops down from the Dairy Godmother.)  The tater tots were ho

rs categorie. The pilsner and the koltch were not too shabby either.

The ride ended with a slog up a big hill on Fort Hunt Road and a long glide toward home.

By the time I arrived my lower back was feeling sore. Too many miles and hills on a new bike will do that to you. Good thing one of my Wednesday medical appointments is a massage.

Big Nellie is cursed. About every other summer, Big Nellie ends up at the bike shop for repairs for weeks. During the last few rides, the steering on Big Nellie has been erratic. I can’t quite explain it but it is definitely not right. Sometimes it feels as if the front wheel is going to disconnect from the bike. Other times it seems like the front wheel is riding in a rut in the road. So I took the bike to my local bike shop. There was a long line for repairs, this being a holiday and good weather.

As happened yesterday, the mechanic could find nothing obviously wrong. So he took the bike for a test ride. I thought I would have to give him some tips because riding a long wheel base recumbent is entirely different from riding a regular bike. This mechanic however worked for several years in a bike shop in Portland Maine where he frequently worked on Tour Easy recumbents. I couldn’t believe my luck.

After his test ride he still wasn’t sure what I was finding wrong with the steering so we decided to do some exploratory surgery. (Frankly, I am scared to ride the thing at this point.)  It could be a problem with the headset, the bearings or the fork inside the tubing of the bike. Hopefully, he won’t find something fatal like a crack in the head tube. Fingers crossed.

I went home and decided to go for a ride on The Mule. The Mule has conventional pedals and straps and after five miles I missed the Speedplay Frogs on Big Nellie. So I decided to ride to REI and get anothe pair. It was in the 90s and my ride took me across Alexandria, a hilly ride. I used the new bicycle lane on King Street. It’s painted a bright green and looks pretty spiffy. 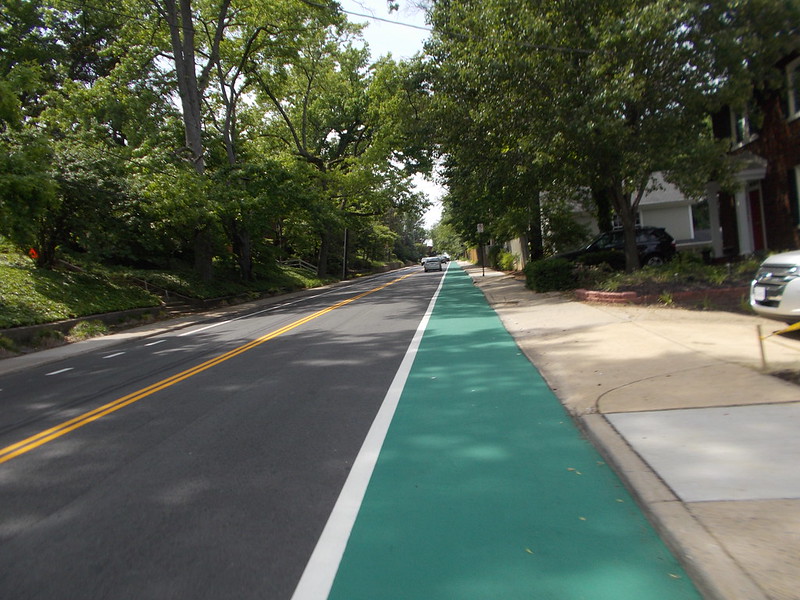 REI was pretty busy. I tried some Keen cycling sandals while waiting for a sales person. They looked really wide but felt horrible on my feet. Luckily a sales person appeared because I was in buy mode and lord knows what I would have found to haul home if I waited any longer. The clerk went looking for the Frogs and came back empty handed.

I rode home but stopped at The Dairy Godmother in the Del Ray neighborhood of Alexandria. I consumed a root beer float. They didn’t have any more vanilla ice cream so they made my float with caramel heath bar ice cream. I am pretty sure this concoction is on the short list to be classified as a controled substance by the Food and Drug Administration. 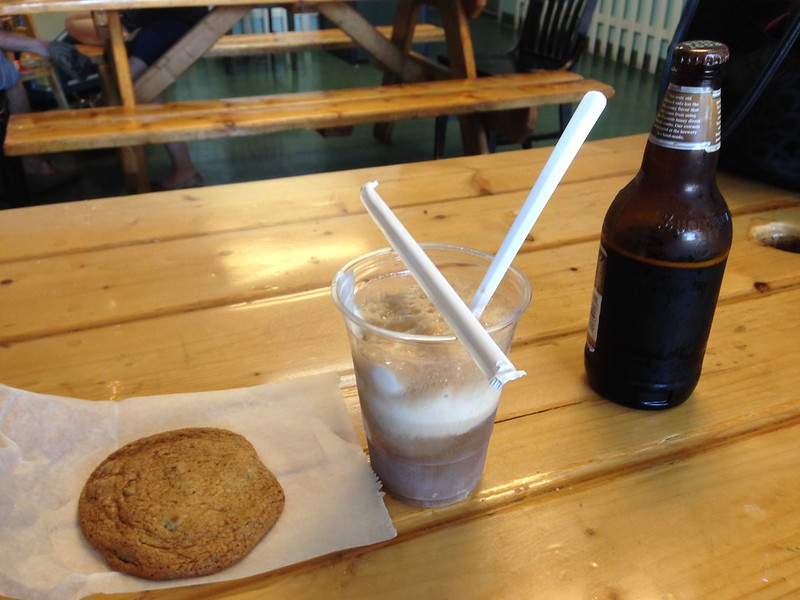 When I got home, I ordered some Frogs online. (For some reason, REY doesn’t include them in its online catalogue. Their loss.)

Tomorrow it’s back to work. By bike, of course.