Twice this spring I have had tickets to baseball games that were rained out. The first one was called before I got to the ballpark, but I managed to make it an eventful day by being hit by an SUV. For the second game, I rode to the ballpark from work and stood around for an hour while the rain came down. The game was called and I rode home in what I expected to be steady rain. Once I was a few miles along, the rain stopped. Go figure.

So the makeup game to that second rainout was last night. I sat with two co-workers, Bob and Karen, and Richie, who retired after working with Bob for many years. I rode to the ballpark on Little Nellie in case I wanted to get a ride home from Bob by folding Little Nellie up and dropping her in the trunk of his car.

The Nationals arrived back from a west coast road trip at 1 am. This meant that many of the older star players would be getting the night off. The starting pitcher had been struggling all season. So I was expecting the Nationals to lose and for the fans rooting for the Orioles to be really obnoxious.

Instead the Nationals dominated from the outset. The good guys won 6-1 thanks to the performance of Dos Padres, speedy shortstop Trea Turner and pitcher Joe Ross. Turner and Ross are young players that the Nationals acquired in a trade with the San Diego Padres. What were the Padres thinking? These two guys are great.  Turner never hit the ball out of the infield but managed to get on base on three weak singles. Then he stole bases at will. He also made one of the best defensive plays I’ve seen. Ross pitched up a storm, striking out 12 and lasting into the 7th inning.

The haircut on the kid sitting in front of me was as good as the game. He got it for the last day of school.  Sister Irma would have had a heart attack if one of us showed up with a mohawk.

During the game a full moon rose over the Anacostia River to the east of the park. This was a good omen for my ride home. The game was over by about 10 p.m. and I made my way to the bike valet. I usually run into Klarence there but not this night. (I miss you Klarence, but, no worries, my mouth’s still bleeding. Stay proud.)

Once clear of the ballpark traffic I made my way around the Jefferson Memorial and over the 14th Street bridge to Virginia and the Mount Vernon Trail. The moonlight reflected off the river and made for a sweet transit.

The trail, of course, was empty. The air was cooling and I was rolling along in trance mode. The moonlight reflecting off the path was only occasionally disturbed by car headlights on the parkway.

I rolled through Old Town Alexandria and didn’t see a single car. There were no tourists. Only peaceful quiet soothing breezes, and the glow from the moon.

Back on the trail south of the beltway, I started down from the bridge over Cameron Run. I spotted a dark mass at the bottom of the brief decline in the shadows. It was a homeless person, dressed completely in dark clothing huddled along the left edge of the trail facing the bushes along the river. If he did not have white hair, I don’t know if I would have even seen him.

The rest of the ride on the trail was just me and the cooling evening air with Mr. Moonlight casting a glow on the proceedings. No bugs to annoy, only a breeze and the sound of my breathing.

Cutting through a neighborhood about a mile from home, there was movement. An animal darting across the road in front of me. A mature fox was crossing the street at a trot. The fox population has exploded near my home in recent years. They tend not to care a whole lot about humans being around, even humans on funny looking machines.

Little Nellie made quick work of the last half mile and we flew across the lawn into the back yard. I didn’t really need my bike light to open my shed; it was illuminated by the moon.

I honestly can’t say which was better, the game or the ride home. I’ll have to try again. Soon.

23 degrees in the shade. Except it was dark. I took off aboard The Mule well before sunrise to make a 7:30 physical therapy appointment on the way to work. I got about a mile from home when the fruits of last night’s gusting winds became evident:

I briefly considered walking around the tree on the lawn to the right. Then I saw the wires and cables near the curb and thought better of it. I backtracked about a half mile and began my trek anew.

I made it to the Dyke Marsh bridge just as the sun was rising. My name is Rootchopper and I am a sunrise addict. 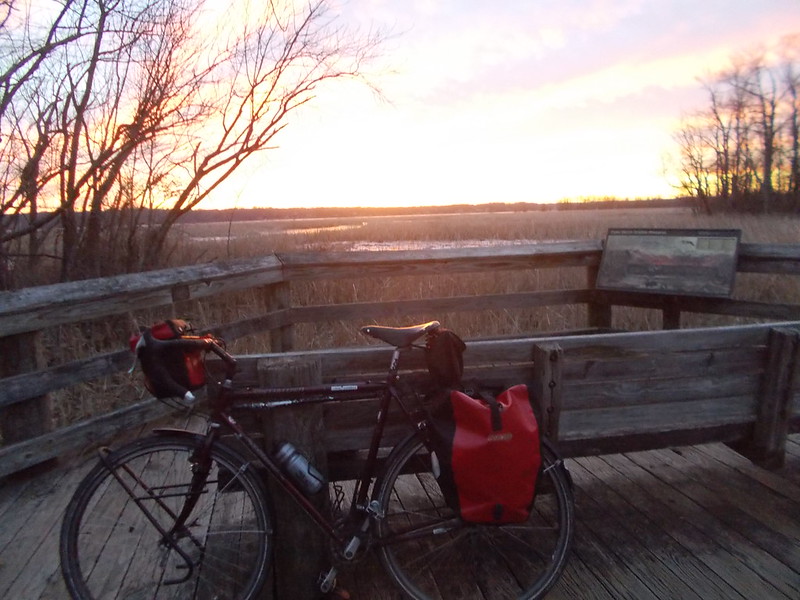 I stopped again under the Wilson Bridge to admire a lift being used to diddle around with the underside of the I95 roadway far above. The lift completely blocked the trail. Nobody bothered to direct traffic because I was pretty much all the traffic that there was to direct. I stopped and took a picture for the hell of it: 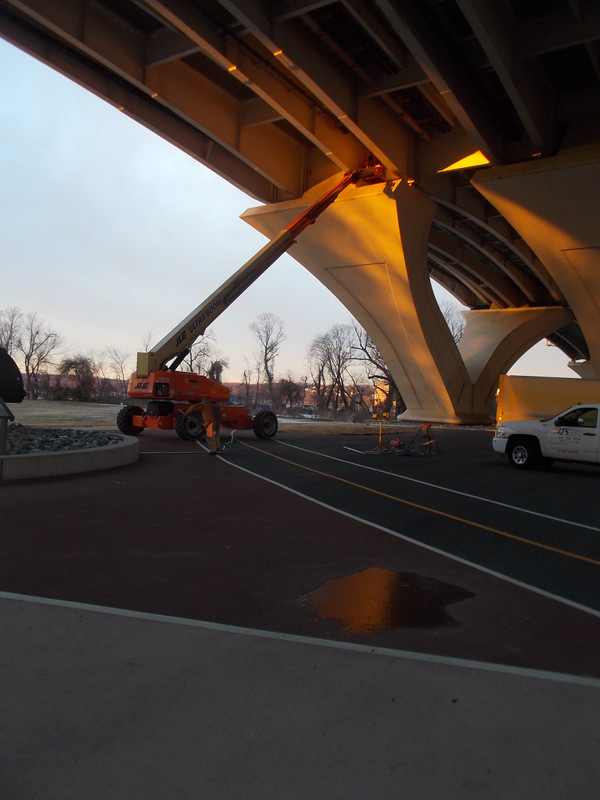 All this stopping and gawking was eating up time. So I boogeyed on up the trail to the physical therapist, located conveniently right on the trail just north of Old Town.

My therapist gave me an extensive exam, ruling out causes for my numb right foot. He gave me a couple of PT exercises to do and we set up a schedule for follow up visits. One of the exercises is the standard runner’s lean to stretch the calf muscle. The other uses a belt to stretch the hamstrings. Looks like the acupuncturist and the PT man are on the same page.

The rest of the ride to work was cold but uneventful. I managed to avoid some black ice here and there. North of the airport I waved to @bilsko as he headed southward. Next I tried to get Mrs. Rootchopper’s attention as she sat in a long line of cars headed for the 14th Street bridge. She didn’t see me. She didn’t look very happy. I was cold but at least I was smiling – and moving.

Temperatures had climbed into the 30s for the ride home. Winds were light. And I was feeling pretty darn good after a low stress day at the office. To be honest, it was just about the nicest ride home I’ve had in a long time. I took in the monuments. They never get old. Every so often a bird flew across the trail. Some Canada geese flew over the river. There were no hills to slow me. When I feel like this, the ride becomes rolling meditation. My mind just ignores the stresses of life and goes on a vacation. I sing (badly). (“Fall at Your Feet” by Crowded House/Neil Finn has been my earworm for three days now.)

As I made my way south of Old Town, the full moon shone above the far bank of the river. It cast a perfect moonbeam on the water. I’d have taken a picture, but it would not have done it justice. It was jaw-droppingly beautiful. I am sooo grateful for my commute route.

Black ice kept appearing in front of me and I just sailed around it. There was no way I was going down tonight. Just not going to happen.

I arrived home to see a small box on my doorstep. My repaired headset had arrived from Chris King. Wanting not to push my cycling luck, I hopped in the car and drove to Spokes Etc. Belle View store where Little Nellie had been stashed during the repair. They should have my steed back to me tomorrow. I’ve missed you Little Nellie.