DC has gone racing crazy. Today was the annual Marine Corps Marathon. (The one that I never finished. Sad face.) I rode ten miles to Crystal City to cheer my friend Heather on. The crowd was really loud. There was music and a sort of festival going on across the street. I am always surprised how some people with horrible running form run right along side people who run smooth and fast.

Heather was shooting for 4:10 so I staked out a spot near the 23 mile mark and waited. And waited. I did a lot of clapping and cheering. As did the people around me. One woman brought a big plastic container of donut holes. The elite runners weren’t interested but the slow pokes went all in. 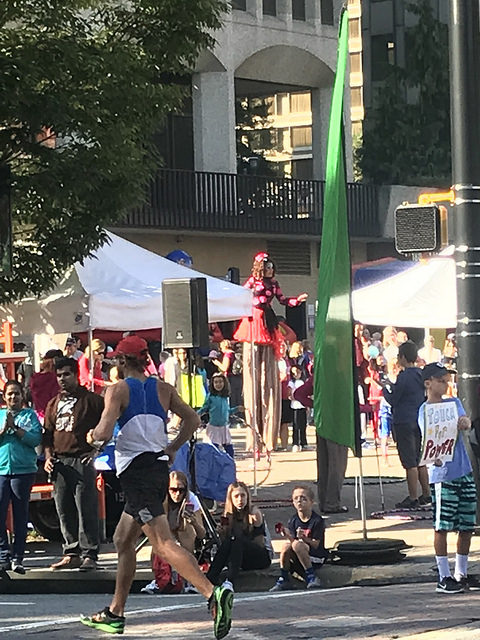 I never saw Heather. I later learned that she finished in 4:33. She encountered cramps at 25 miles. She also found beer during the last few miles. Drinking beer after running used to make my entire body feel awful. I don’t know how anybody drinks it while running.

After I gave up (when the 5:00 pace runner went by) I rode to the grounds of the Old Soldiers Home in DC (which I’d never seen before) to see DC Cyclocross. Many of my friends, male and female, young and old (and foolish), love this stuff. They love to race and to hang out and be bikey. I have to admit it’s pretty cool to watch. It’s like watching a bicycle roller coaster. Friend of the blog Brian rode for the first time today. I missed it. Apparently he thought it was awesome. He will be insufferable now. Wait, he’s always been insufferable. We’re doomed. 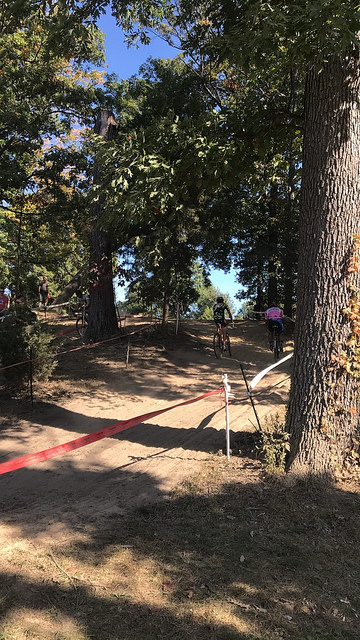 Dear Prudence, My friend rode his first cyclocross race today. He didn’t die. He loved it. He won’t stop talking about it? Is it okay to put a WABA sock in his mouth? Signed, Sick of Cross (SOX) )

Did I mention the weather was perfect? For the fourth day in a row. We get another one tomorrow. Then it rains. And cold-ish air comes in.

Last week my friend Katie Bolton asked me to talk to her about strategies for watching the up coming Marine Corps Marathon. Her article hit the interwebs over the weekend:

I met Katie through Friday Coffee Club. She is an unassuming soul who is infinitely more talented, likable, and bright than she’ll ever know. She is between careers and blogs about the travails of finding the sweet spot in the work/life world, a topic that seems to consume so many of my young friends in DC.

Then I hurt my left knee playing volleyball. Sad face.

I miss running, especially on days when it is just a little too cool for bike riding. That’s prime long distance running weather.

You might think that runners don’t appreciate the cheers from the crowd in a marathon. You’d be wrong. The energy boost that the crowd gives is potent. I’ll never forget the boost I got from the crowds in Newport RI during the final run through downtown in the Ocean State Marathon. (Too bad they weren’t around when I hit the wall three miles later!)

Of course, a great way to cheer your friendly marathoner on is to ride a bike to various spots along the course. In DC you don’t even need a bike. You can use the bike sharing system. Any bike will do.

I know a few people runing Marine Corps so I’ll ride up to DC to cheer them on. if there is a marathon in your neck of the woods, check it out. Make some noise. The runners will definitely appreciate it.

I bought my first bike as an adult (sort of) when I was 22. It was a Raleigh Grand Prix and it cost me an entire week’s wages. I rode it for a summer in Boston and then moved to Providence for grad school. My Raleigh was my only means of transport and it served me well (until its left front fork fell off during a ride, but that’s another story). After class I’d go for rides in Providence and its environs until, that is, the days grew short. Back in those days bicycle lighting was patheticly inadequate. How was I going to de-stress without my bike.

I had a pair of Jack Purcell tennis shoes so I figured why not try running. My first run lasted about a quarter of a mile before I stopped due to lack of oxygen. With each passing day I added a bit of distance. After a few weeks, my tennis shoes were nearly destroyed so I bought a pair of running shoes and kept at it.

Over the course of the next two years my mileage increased incrementally. I still rode my bike but only to run errands or go on the occasion long (usually well under 30 miles) ride. I hit the 1 mile barrier, the 3 mile barrier, and the 5 mile barrier. Getting past each barrier took major effort. 7 miles. 10 miles. Once I cleared 13 miles I was cooking with gas. I quietly entered the Ocean State Marathon in Newport.

About a month before I tried my first 20 miler. It nearly killed me. A week later I tried again and finished, to my uttter amazement, in a full out 1 mile sprint. Dang. The day of the marathon came and some grad school friends and I drove to Newport. It was November 1. About a third of the course traversed Ocean Drive, with winds off Rhode Island sound. It was cold. I wore a t-shirt and cheap gym shorts.

And I ran. And I ran. And I ran. At 20 miles I felts awesome. At 23 I felt awful. The kind of awful that simply can’t be described. I could barely bend my legs. I forged onward walking and jogging until I could run slowly. My legs were beaten to death by the crown in Ocean Drive and the incredibly hard surface of Belleview Boulevard, pretty mansions all in a row.

The last half mile involved the biggest hill of the course. I was so mad when I saw it I took off in a full out sprint. When I crossed the finish line the congestion of the runners ahead of me caused me to stop abruptly. I was given my medal (which I still have), memorized my time (3:10:18) and started to cramp up something fierce. My crew of grad school friends came to my side and help me walk away.

As the Brits say, I was chuffed and knackered. I remember that run like it was yesterday. I wrecked my left knee playing volleyball three years later and had to give up running. I miss it every day still. When I walk downstairs to my family room I pass a wall with framed certificates from four of my seven marathon finishes. Glory days.

I rode to work in a light drizzle, a little underdressed but too stubborn to pull my layers out. No goslings yet. I did see Three Step Runner and Hardware Store Man, two of my regulars on the way in. About a mile from work, Bob (Don’t Call Me Rachel) Cannon from the two FCCs rode by on his way to Southwest DC. Under the TR Bridge I spotted a Tricolored Heron next to the trail. It’s the first time I’ve seen one. I didn’t bother stopping to take a picture because he would have flown off as soon as I did. Herons don’t much like paparazzi.

I left work just after lunch to go to an eye appointment in Old Town Alexandria. On the way I passed Katie (@itsnotlucky). I don’t normally see her in motion; she’s usually helping out at some event or other, dressed very colorfully. She wasn’t dressed colorfully, but, as always, she was smiling. The world needs more smilers.

My eye doctor is a bike commuter which I think is pretty neat. He checked out my retinas, my corneas and my eye pressure. Three thumbs up. I rode home with dilated pupils, making a cloudy day appear bright even with sunglasses on.

When I got home I checked my email, which was not very easy to read with the dilated pupils and all. Not much going on at work. Then I checked my Twitter feed and my heart broke.

I lived in Boston for five years. I went to the Boston Marathon, usually down near Kenmore Square, whenever I could. When I had to work, I listened to the race on the radio. I remember the year Bill Rodgers won for the first time. On the radio, the announcers and the crowds were going crazy. I couldn’t comprehend why anyone would run a marathon, which probably had something to do with my two-pack a day cigarette habit.

Before I moved to Providence, I quit smoking and bought a bike. New England autumn days are short so I parked the bike and started to run. Three years later I ran the Ocean State Marathon in Newport RI in 3:10:18. The last three miles were pure hell. My running friends said that the bear jumped on my back.

I always wanted to run Boston, but, back then the qualifying time was 2:40, which is wicked fast. I’d go up to see the race when I could. I was there when a Boston motorcycle cop unintentionally caused Dick Beardsley to make a wide turn and gave Alberto Salazar just enough separation to win one of the greatest races in marathon history.

Today, history was made again in Boston. Tragic history. I know how it feels to be in the crowd cheering on your friends. The whole city stops to celebrate. Today, some sick person or persons used this beautiful event to kill and maim. I feel for the victims.

I remember riding in Bike DC just a few days after September 11. The riders sang God Bless America before the start near RFK Stadium. The ride itself, shortened by an understandable lack of police support, sucked, but it was important for everyone to do the ride. To keep on. So tomorrow, if you can, go for a run.  Or a ride. To keep on. This time for Boston.