After beating my body up yesterday, I got up before dawn in crisp 58 degree air to ride the Indian Head (a.k.a. Southern Maryland) 100.  Indian Head is a town that time has passed by. It would be nice if this ride did something for the town’s economy but, from what I could tell, the town has no economy. I should look up why this place is called Indian Head but I am too lazy. Regardless it’s a better name than Dead Strip Mall Village.

I started a little after 7 am which is appalling given the fact that this is a holiday (Labor Day). I didn’t see anyone I knew. Most people I know had the good common sense to be asleep. I wore a vest and arm warmers for the first 18 miles. The cold air also made my asthma kick in so at the first rest stop I took a couple hits of albuterol. I ain’t messing with lung problems anymore this year, thank you very much.

I was riding Deets, my Surly Cross Check. After the first year of fiddling with the set up, I have this bike dialed in perfectly. I was zipping along at 14 miles per hour. (For me with knobby tires, this is zipping.) 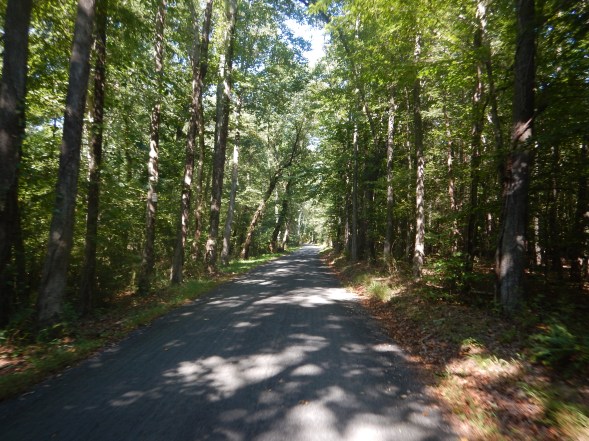 For the entire ride I kept my cellphone stashed. No tweets. One picture with a camera. Just me paying attention to my body. I tried to keep my respiratory rate stable. Except for a few nasty hills, I succeeded. I also focused on keeping my pedaling efficient. Don’t mash, spin with even pressure on the pedals all the way around. It occurred to me that paying close attention to my breathing and to specific parts of my body mechanics is rolling meditation. Every so often I had to double check to make sure I hadn’t missed a turn.

One thing that kept me from getting too zoned out was the fact that my bashed up left knee, arm, and shoulder were aching on and off. It’s going to take a few days to get them back to normal. One thing that didn’t hurt at all was my back. This never happens. Deets is definitely dialed in.

The first 40 miles were low effort. At one point we rode on a road with fresh pavement and rolling hills. Zoom down one, tucking for maximum speed at minimum effort, then take the next uphill with only a few pedal rotations. I love hill hopping. I thought of @BobbiShafoe who  hill hopped the Backroads metric century we did a few years ago.

There are several abrupt climbs on this ride. At one point we were making our way up a hill when the road turned to the left. Just before the turn someone had painter the word “HILL” on the road. We made the turn and there was steepage. About a dozen cyclists had dismounted and were walking. Not. Gonna. Happen. I dropped into my lowest gear and went at it. Pedaling to the rest stop at the top was sweet. This old man on a cross bike with knobby tires and no granny gear felt like feeding quiche to all the walkers. That would be mean. Anyway I didn’t have any quiche so I grabbed a snack and pedaled on.

This section of Charles County Maryland has some truly beautiful country roads. I do have two complaints. Some of the prettiest roads, country lanes almost, are paved with chip seal. It’s cheaper than asphalt but it’s much less smooth. The other complaint is the depressing rural poverty. We were 35 miles from DC and I saw people living in dilapidated mobile homes with portapotties in the yard. Many of the single family houses lacked paint. It’s like an economic black hole.

My measured breathing and pedaling paid off during the second 50 miles. I did lose a little speed but that may be attributed to the temperatures rising into the high 80s. Riders were cramping up all over the place. I drank energy drink at rest stops and lots of water.  I knew that near the 90 mile mark was Rose Hill. This one nearly did me in the first time I rode it a decade ago. I was shocked that I rode up it today with no problem, even without a granny gear. Go Deets.

The  last ten miles were a breeze.  At mile 93-ish we turned onto the Indian Head Rail Trail. In past, shorter Indian Head rides, I have found this to be frustrating. It’s a false flat. It looks flat but gradually rises. When you are tired and hot and want the ride to end, a false flat can really mess with your head. It didn’t bother me at all today. In fact, I was surprised to see the end of the trail.

I rolled into the finish at 98.5 miles. I would suspect that my odometer was off but I overheard some other riders saying the same thing. We call it 100, okay?

So it’s on to three bike commutes, a night baseball game (or two?), and Saturday’s 50 States Ride. Can’t wait.

I rode Deets, my Surly Cross Check, to the barbershop. I wore a baseball cap. I always get the same haircut. This time the barber must have mistaken me for a second grader. The short haircut became a buzz cut. Ugh. Good thing I had the baseball cap. I’ll be wearing it for about six weeks.

I rode to Old Town along the Mount Vernon Trail. The weather was breezy and just warm enough. Perfect. Just north of Belle Haven Park police cars were parked next to the trail with their lights flashing. A police officer was taking down yellow crime scene tape along the river side of the trail. I couldn’t see any desperados or axe murderers so I rode on.

I made it to the bank and did my business with the magic money machine. When I turned around there was Emilia. We did the 50 States Ride together in 2014, one of my very best days on a bike. It was also a very hard ride. She hasn’t talked to me since. (Just kidding.) What a great surprise.

I dawdled a bit in north Old Town before heading home with a very pleasant tailwind. A police officer was still sitting in his car at the scene of the mystery but I decided to leave it to some other citizen crimestopper to find out what was going on.

On the way home, Deets decided to hit a milestone: 2,000 miles. He’s all ready to ride the Southern Maryland 100 on Monday and the 50 States next Saturday.

Kirstin and I had stuff to do in the afternoon. Sunday stuff. The kind of stuff that just has to get done. There was no time for riding a bike all day. The was no time for getting lost. So we decided to do the a ride as part of the Southern Maryland Century festivities.

The Southern Maryland Century is put on by the Oxon Hill Bicycle and Trail Club. I’ve done the metric century (100 kilometer) ride many times but never the 100-miler. The weather today just begged for a long ride but there was the aforementioned stuff to do. Kirstin and I decided to ride the 46-mile route.

The morning was cloudy and cool. We took off from Indian Head following the freshly painted green arrows on the road. This time we also had a cue sheet. Cue sheets are really useful when you don’t want to get lost. We tried to get lost but alas we done failed.

We spun along the country roads. Cars and pick-em-up trucks gave us plenty of room. The roadside alternated between soybeans, wildflowers, and modest rural houses. Along the way we passed a topiary horse (what every front lawn needs, if you ask me), a box turtle on a rail trail (saved by fearless Kistin), a hill of kudzu that was trully impressive, and a very noisy pileated woodpecker.

(Did you know that Saint Kirstin is the patron saint of defenseless animals? It’s true. You could look it up, because, if you did, you’d find out what a liar I am.)

The wind seemed to be at our backs for much of the ride but this makes no sense on an out and back route. We joked about how we are suckers for a tailwind. Normally I am a hill hater down to my chamois but this time I took to the few challenging climbs without complaint. Kirstin did all but one of them without resorting to her chainring of shame. And not a howl did she shout.

The only really negative aspect of this ride was the simple fact that it was too short. Witrh such perfect conditions the two fo us could have ridden for hours longer, but stuff calls.

Some pix from a pretty darn nice day on the bike can be found on my Flickr page.