On Sunday, two friends from my grad school days came over for brunch. Matt is not athletic. Mike is. Mike was going stir crazy staying with Matt so we agreed that I would take Mike for a bike ride after brunch. Fortunately, Mike is exactly my size so The Mule fit him. I rode my Cross Check.

Mike has a yard sale bike at home in Providence that he rides religiously once or twice a year. So I set a gentle pace. We did a tour of the Mount Vernon Trail bald eagle nests. Along the way Mike told me about how he recently used CitiBikes to ride around New York City. He said he would never have ridden a bike except for the fact that there are separate dedicated bike lanes. He felt totally safe. Mike should be the poster boy for urban bike infrastructure.

We made it to the Belle Haven nest but saw no eagles. As we rode further Mike told me about the  East Bay Bike Trail in Rhode Island. He loves it. I ran this once when it was a railroad line back in 1980 or 1981. It really sounds fantastic but Mike was annoyed that it wasn’t wide enough. Soon we entered Jones Point Park Mike was shocked to see a separate walking lane. (I didn’t have the heart to tell him that most walkers ignore it.)

Under the giant bridge and into Old Town. Then we took the Wilkes Street tunnel and Royal Street back to the Mount Vernon Trail. Continuing south we stopped at the Tulane nest. I could barely make it out with binoculars amid the dense foliage. Mike never saw it. Onward to the osprey (or maybe bald eagle nest) at the fishing hole. No birds, nice view.

Our next stop was the Morningside Nest which I couldn’t find at all amid the leaves. My bald eagle nest tour was becoming a bust.

We continued down the trail to Fort Hunt Park, stopping to admire Fort Washington on the opposite side of the Potomac River. We did a lap in the park then headed for Mount Vernon. About a half mile from the park  I pulled over for one more bald eagle nest. I just could not find it. As I was giving up, I looked up and there it was, right out in the open. Easily the biggest nest of all. Mike saw it too. And just as he focused on it, an eagle flew down and into it. The nest, or actually the outside structure of the nest, is so big that the bird just vanished. I could occasionally spot the bird’s head bopping up and down, probably feeding an eaglet. As we were watching the nest, a second bald eagle flew in circles overhead. Woot!

We started talking with a couple who were walking their dog. Just as we were about to leave they spotted a bizarre looking naval vessel making good time on the river heading toward DC. It had a sort of dazzle camouflage on its sides. Very cool.

I took Mike up to Mount Vernon. He did not much a
ppreciate the last hill. After a brief rest, we continued  beyond the estate for a photo op before heading back home. 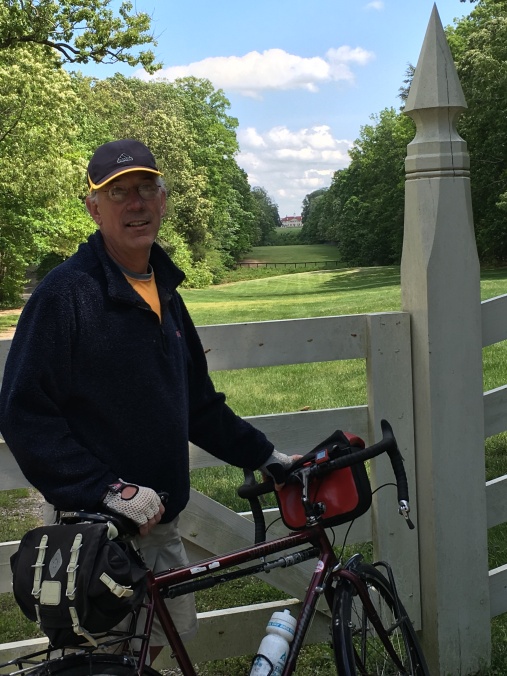 After he left things got at tad more interesting, but that’s a tale for another post….

One thought on “Sunday Sight Seeing on the Mount Vernon Trail”