A double nickel is 55. The first time I heard this expression was when Jimmy Carter imposed a national 55 mile per hour speed limit during an “energy crisis.” Back in the 70s an energy crisis existed when you couldn’t find gas for your tank. Driving 55 on a wide open highway clearly designed for speeds of 70 or 75 miles per hour is enough to make you crazy. I once got a ticket for going 65 on I-66 in Virginia. The very same highway now has a 70 mile per hour speed limit. I should ask for a refund.

The energy crisis also introduced us to right on red. I am willing to bet that thousands of bicyclists and pedestrians have been mowed down by cars that don’t both to stop when making a right on red. It happened to me when I was on a bike trail.

I wonder if the lives saved from the double nickel exceeded the lives lost from right on red. Personally, I think these two changes began the erosion of the public’s regard for traffic laws. We got rid of the 55 mile per hour speed limit decades ago. We should do the same with right on red.

The contractors working on our house were not nearly as noisy as usual but their choice of overwrought oldie latin ballads on their boombox was getting pretty irritating. How long is this singer going to hold the vibratto note on “quiero”? Fortunately today was an absolutely perfect day for a bike ride.

I hit the road with the intent of riding to Bethesda for some pizza for lunch. Bethesda is about 25 miles from home so in my mind this makes sense. Your sanity may vary. I rode the Mount Vernon Trail to Crystal City. Then rode by a scenic and vast Pentagon parking lot before cruising around the north wall of Arlington Cemetery. I circled around the Iwo Jim Memorial (forever fixed in my mind by a nincompoop radio news reader who called it the Statue of the Two Jimas). Next I took Lynn Street through Rosslyn and the Intersection of Doom which is doomier thanks to construction. (I cannot even begin to describe the Intersection of Doom other than to say a bunch of roads, trails, and on and off ramps to I-66 and the GW Parkway all converging  at one end of the Key Bridge over the Potomac River into Georgetown. Look up “hot mess” in the dictionary. You’ll se a picture of the Intersection of Doom.)

Over the Key Bridge then up a side street into Georgetown where students meandered with big smiles on their faces, a sure sign that classes aren’t underway yet. I managed to miss a turn but soon found myself headed west-ish on Reservoir Road past Georgetown Hospital (and more construction) and the Bauhaus-y German Embassy.

Did I mention it was a perfect day for riding a bike? Well, it was. I got to the Old Anglers and I didn’t want to stop. So I refilled my water bottles and cut over to the C & O Canal towpath and headed back home. The towpath was bumpy in parts but after about a mile things smoothed out and I was cruising along with a tailwind.

There was plenty of evidence that this has been a hard year for the towpath. The towpath was narrow where it runs along the top of a huge wall near Carderock. (It’s a long way down.) The Billy Goat B Trail was closed. And crews were out clearing large trees that had fallen across the towpath.

After a mile of repairs the canal became blissful. Low humidity. Warm temps. A tailwind. Shade. The crunch of tires on the towpath. Ahhhh….. 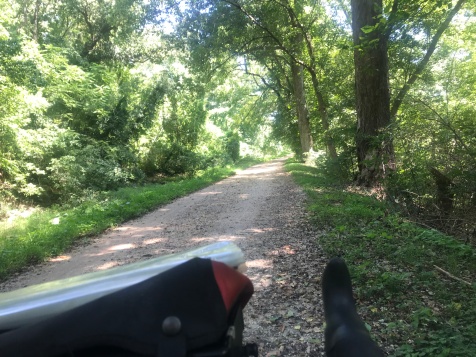 My bliss was interrupted by an ominous sign. It’s a good thing the sign is there because this part of the river looked really inviting. 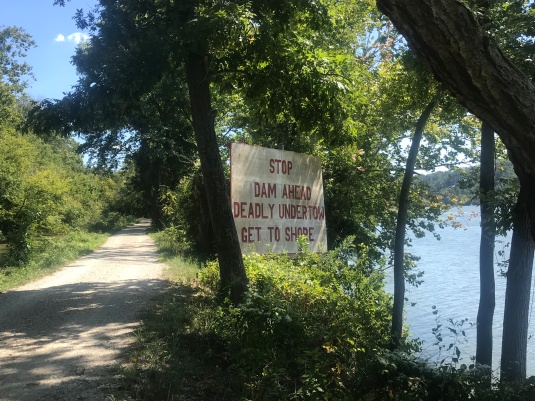 No skinny dipping for me.

Other than being all kinds of messed up under the Beltway, the towpath was in pretty good condition. About three miles before the end of the canal, I cut over to the Capital Crescent Trail. This took me to a protected cycletrack on K Street along the Georgetown waterfront.

Next I took the side path along the Rock Creek and Potomac Parkway and Ohio Drive past the Watergate, the Kennedy Center, the Lincoln Memorial, and the Jefferson Memorial. (For you out of towners, this is pretty typical of DC. You can’t go a mile without seeing some famous building or other.)

I crossed the Potomac on the 14th Street Bridge and headed home on the Mount Vernon Trail. About five miles from my house the first double nickel happened. The Mule turned 55. 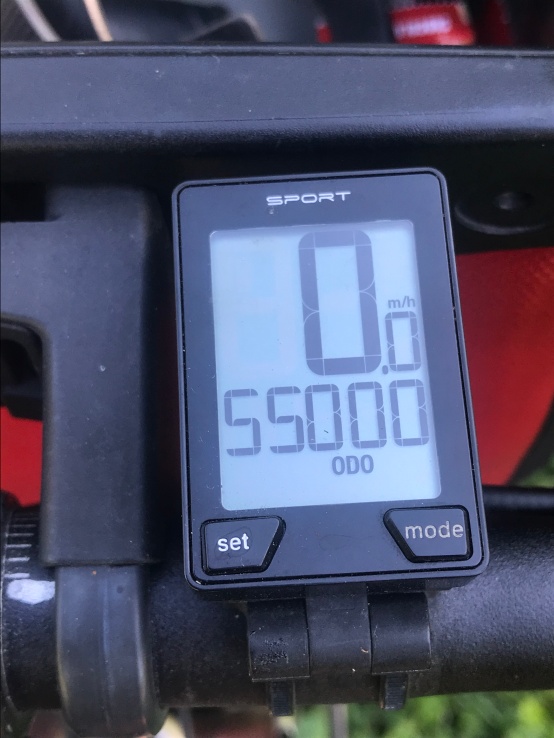 I pulled into my driveway with the second double nickel. I had ridden 55 miles.

Did I mention that it is perfect weather for a nap?