A friend of mine used to hold health retreats near Harper’s Ferry. If the weather was good, she’d take her guests for a hike. I honestly don’t know where she took them but when I started hiking I search for hikes near Harper’s Ferry. There are two hikes that are very popular. They each include an overlook with spectacular views of the Harper’s Ferry area.

I began at the Harper’s Ferry train station. My year pass for all national parks allowed me to avoid the $10 parking fee. Thanks again, Ultrarunnergirl.

Off I hoofed across the railroad bridge from Harper’s Ferry to the C&O Canal towpath, all the while looking at Maryland Heights across the way. I am going up there?  I headed northwest along the path for a half mile, crossed the empty canal, and a two-lane road and the climbing began on the Maryland Heights hike.

Up, up, up. This trail is relentlessly up. And steep in some sections. I was breathing pretty heavily until my lungs caught up with my legs. I took a side path to what I thought was the overlook but it was just an old battery. The Heights were strategically important in the Civil War. There are batteries and a fort along the trail.

Up some more. The trail began to narrow and become rockier. I hate rocks in a trail but that’s what most of the trails in this area are like. 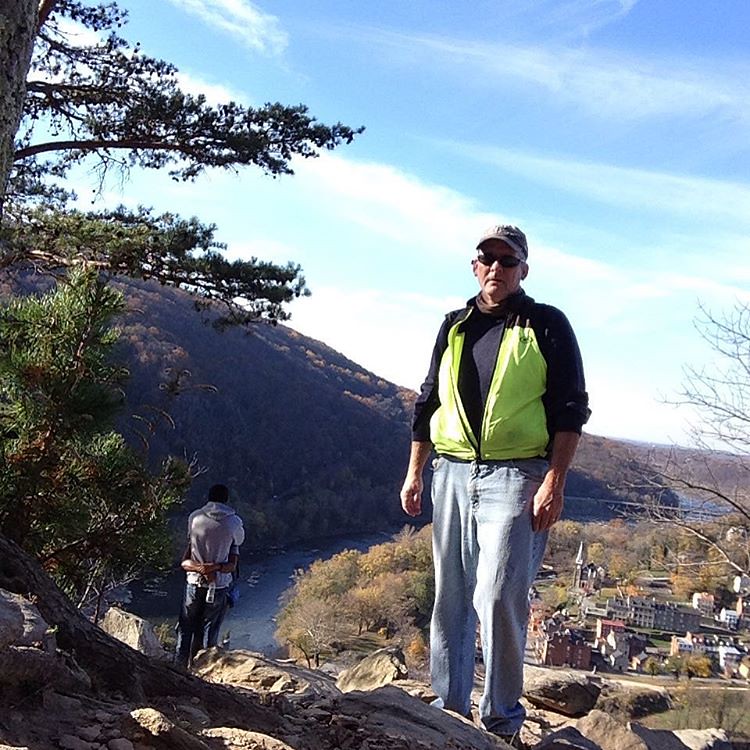 I crested the hill and now found myself winding back down to the overlook. More rocks. The leaves on the ground made footing slippery. Soon I was at the overlook. Well worth the effort, especially on this beautiful fall day. A young couple was canoodling so I decided to take a couple of pictures and head back up to the main trail. On the way up I must have passed 20 people coming down. So much for canoodling in peace.

Back on the main trail I took a right to climb to a ridge line. It was really steep and rocky but I just kept at it. Soon I arrived at an old stone fort. I would have hate to have had to build this thing. There’s no structure to the fort, just stone walls.

During my hike I twice was passed by a group of ultramarathon runners. Essentially these people are speed hikers. How they managed to move so fast without turning an ankle is beyond me. They were apparently doing and out and back run because I saw them again about 30 minutes later.

I headed back down on a mercifully smoother trail paralleling the ridge. Judging from the number of people coming up, this must be one of the most popular trails in the area. I was grateful to have arrived before the crowds.

Back on the towpath I headed south east for about 3 miles. The views of the river were magnificent and the sound of the water rushing over the rocks was incredibly calming.

I was now on the Weverton Cliff hike. This also the Appalachian Trail. I ate my apple and watched a parade of 20 fully loaded hikers coming my way as I walked to the steep trail to the cliff. This sucker is tough going. I would not want to do it with a full backpack. The backpackers that I saw were pretty scruffy but they moved with deliberate speed. Not fast, exactly, but they were relentless and focused.

Across the railroad tracks, up a side trail, under a highway, up some more trail, across a street and the real fun began.

Up into a seemingly endless series of switchbacks. The bigger trees had all dropped their leaves but the undergrowth was bright yellow and orange in the slanting fall sunlight. It’s good to have pretty when you are suffering.

On the Maryland Heights descent I fell when the leaves gave way under my feet. I just landed on my butt and slid. As I climbed up to the cliff and woman did the same thing right in front of me. She just laughed it off.

Switchback after switchback then finally a sign pointing the AT to the north and the overlook to the south.

I had to hike down a few extremely hundred yards to the overlook but the view was really excellent. The sun had come out and I basked in its warmth for a few minutes as I watched the sunlight glittering over the Potomac River. 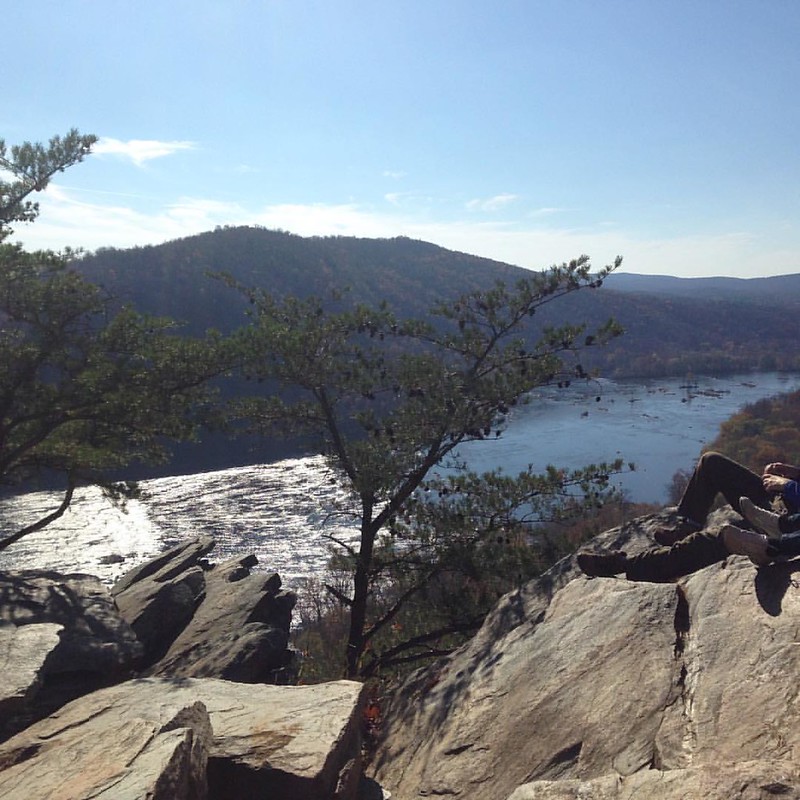 I dreaded the hike down but found it to be surprisingly easy. I passed a woman who looked to be well into her seventies. I sure hope I am that fit when I am her age.

I made it back to the towpath in good shape and headed for Harper’s Ferry. At this point I was wishing I had brought more than one apple. I was hoping I wasn’t going to hit the wall. I started following a guy with a backpack on. He didn’t seem to be putting any effort into his stride but I still could not keep up with him.

So I looked at the sunlit yellow leaves, watched a bunch of vultures soaring next to the rock face of Maryland Heights and enjoyed the final two miles as much as my tired body would allow.

If I were to come back to Harper’s Ferry I think I’d park at the base of Weverton Cliff, hike up to the overlook turnoff and take the AT north. Despite all the rocks, it was a pretty damned nice hike. Maryland Heights was just as hard but the crowds would put me off a return.

My Flickr page has all the pix I took.