What a beautiful Saturday. I could have gone for a hike but I had things to do. Eight things to be exact.

I rode my bike to the government center down the street and I voted. I could vote early because I will be out of town on election day. The only down side to voting early is that other voters don’t get to see me bike to the polls. Oh well, at least I got a new sticker.

Next up, I rode to the drug store to score some drugs. Okay, it was asthma medicine which isn’t all that exciting until I don’t have it when I need it.

I rode the Mount Vernon Trail to the farmer’s market it Old Town Alexandria. The place was packed. There were apples. LOTS of apples. I didn’t buy any. I was just people watching. There were people. LOTS of people. I didn’t know any.

Next up was a Thai massage. After all the biking I’ve been doing, it was time to cash in the gift card that Mrs. Rootchopper gave me on my birthday in August. It was for a one-hour session including a foot bath. I’d never had a foot bath like this before. The therapist kneaded my feet. I laughed through the whole thing except when it hurt. I have tender puppies. So it hurt quite a lot. When it was over, it felt pretty awesome. If you are a runner, you should have a soaking foot massage.

Then the message happened. Dang are my muscles tight. After 20 minutes, I asked to extend my message for an extra 30 minutes. This was going to take some time. My massage therapist was Dau. She did a great job. Some of it hurt but I told her to keep working on the sore parts anyway. It differed from the other Thai massage I had last year. For one thing, I was on a massage table instead of on a cushion on the floor. This gave Dau a different angle on manipulating my body. Another difference is that, although my legs were tight, I did not have numbness in my right leg. Last time the therapist had to limit the work on my thighs.

When it was over I walked out feeling totally relaxed. My thighs were so relaxed. I had no idea how tight they were. And my back felt like new.

I am not a massage kind of guy. I usually feel like I have better things to do with my time. This was different. It was definitely worth the time and money.

Mrs. Rootchopper does the grocery shopping after her Saturday morning Pilates class. I forgot to tell her that we needed coffee and raisins. So I swung by the grocery store to get some. They fit nicely in my Carradice saddle bag.

After I got home, I mowed the lawn. During summer our back lawn grows much faster than the front. In autumn, the front grows faster. Either way, it’s much easier to mow the lawn when it’s not 95 degrees outside.

I read the paper. Two hours later I woke up. This is primo napping weather. Resistance is futile.

I bought tickets for my daughter to fly home for Thanksgiving. Free. Boy am I glad Southwest flies into National Airport. 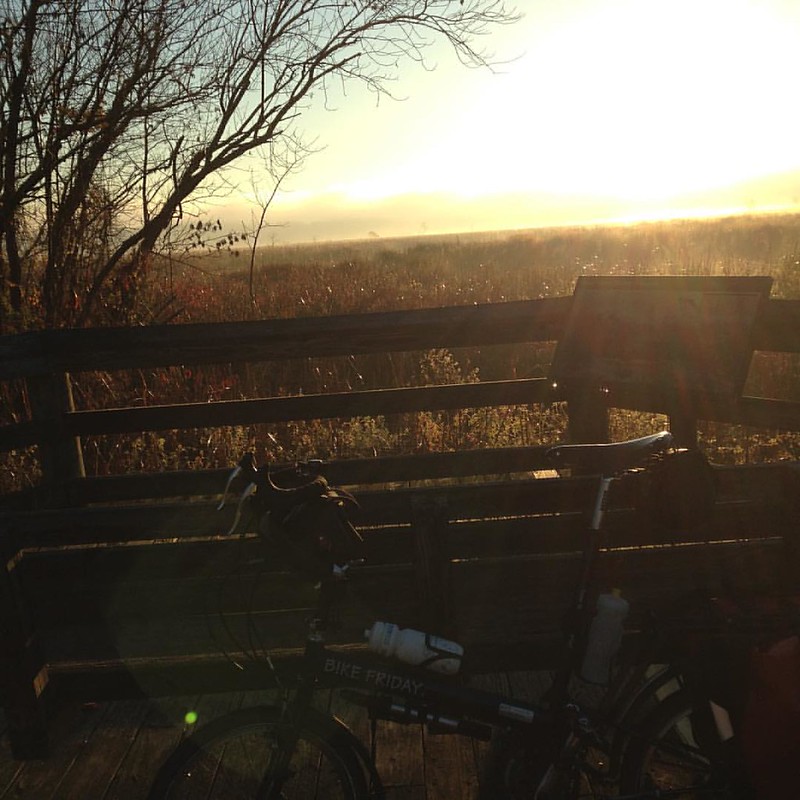 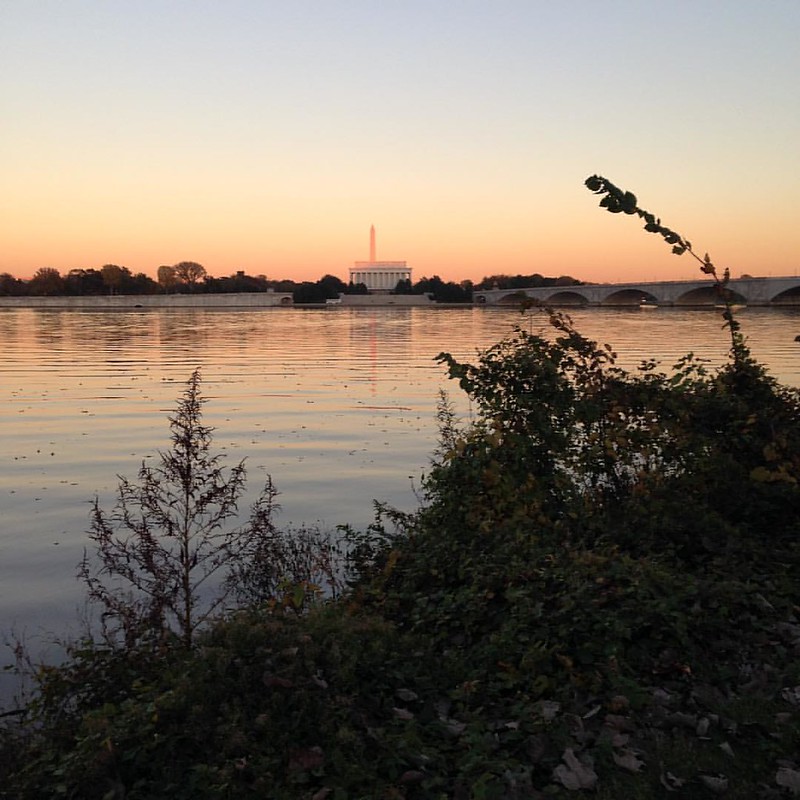 Yesterday dawned with a nip in the air. Wait. Who am I kidding? It was downright cold. cold. Fortunately, it was the first day of standard time so the rising sun had warmed things up a bit before I left the house. I took my winter route, which shaves about a mile off my commute by riding diagonally across the Hollin Hall neighborhood rather than around it. Even with the warmer air, my face was covered in tears as my eyes rebelled against the cold wind.

With apologies to the late George Carlin (is that as opposed to the early George Carlin?) , the forecast for the evening commute was DARK. Dang. I nearly steered off the bike path a couple of times. And the headlights in my eyes from the cars travelling north on the GW Parkway weren’t a whole lot of fun either. Then there was the rider who came up behind me with a flashing  death ray mounted on his bike.

It’s always helpful to have burned out retinas when commuting at night.

South of Old Town, a young deer jumped out of the trailside shrubs and bounded across my path. In all my years of bike commuting I have only once hit a critter. It was a squirrel whose tail buzzed the spokes of my front wheel. The squirrel survived the encounter. I think making contact with a deer might not turn out so well for me.

I noticed recently that the “I voted” sticker on my helmet was weathered. Lucky for me, today is Election Day. I rode Big Nellie to my polling place and picked up a new one. (It’s always fun to ride my humongous recumbent to the polling place. It’s like saying, “I ride a lounge chair and I vote!”) Oh, and I voted. I wonder if more people would vote if they gave out pumpkin spice lattes or cheesecake.

The ride to work was not as cold as yesterday but the tears in my eyes were back. The tears might have something to do with the fact that I hit 34 miles per hour bombing down the hill from Park Terrace Drive. Weeee.

As I ride in these days I am monitoring the progress of a pregnant runner. She started showing a couple of weeks ago. Lately she’s been walking a bit. Today she had on a Purdue sweatshirt. I forgot that under my vest I had a Butler t-shirt. Who’s yur kawledge?

Another new regular on the trail is Smiling New Mom. She runs southward as I ride north, pushing a superduper pram with a near-toddler inside. Mornin’ Mom. The kid is so cute.

Today’s calvalcade of trail users also included Hoppy Guy, the Three Step Runner, Nancy “2 Sheds” Duley, and CAL.  Hoppy Guy is a runner with a bad knee. Three Step Runner is a woman who runs three paces then walks then runs three paces, etc. Nancy “2 Sheds” Duley is a #fridaycoffeeclub irregular who bike commutes when she telecommutes. She is a confused soul. CAL is a sixty something man who wears a University of California shirt. Or maybe he has amnesia and wears his name on his shirt in case he forgets who he is.

For two days in a row no drivers tried to kill me in Rosslyn. There is a great disturbance in the force.

The ride home was peaceful. I was not threatened by any ruminants. I think they must have been at the polls.