The older I get the more I appreciate each day. This time of year bike commutes along the Potomac River are rewarded by such beautiful sunrises. I just have to stop to take in the moment. Today I stopped three times but this is the best of the three pix I took.

The fourth annual coffeeneuring challenge is upon us. This challenge entails riding your bike to coffee shops on the weekends and meeting rules that only a randonneur would love. I wasn’t going to do it this year but I had a Sunday to burn and a gift certificate to a new coffee shop burning a whole in my saddle bag.

To me rolling out to get a cup of coffee seems kind of silly since I have a perfectly good coffee maker in my kitchen. So I combined today’s coffee trek with some errands. I started with a ride to the hardware store for some bird seed. Little Nellie, my New Wrold Tourist with little wheels, does a terrifc job of carrying the unbalanced load without making me feel like I’m going to tip over.

Once the seeds were off loaded at home, I turned around and rode the Mount Vernon Trail to Old Town to use an ATM. I could have done this at the Safeway near home but I needed some therapy miles. Call it bikescendental meditation. My brain shuts off, I sing songs badly, I look at the egrets and herons. All is calm.

After ATMing, I headed off to the coffee shop on Telegraph Road south of the beltway. I rode over to the Eisenhower Valley (why does this invoke tanks in my mind) and used the nifty newish trail over the beltway at Telegraph. It drops you right smack dab in the middle of a spaghetti bowl of ramps and traffic lanes going every which way. This being Sunday traffic was light. Riding this on a weekday would take nerves of steel. This sort of road pattern is what I call Car Hell. Car Hell is why Fairfax County is a bike hostile community.

After waiting three minutes for a traffic light, I headed south on Telegraph. The shoulder comes and goes so taking the lane is the only option. People were driving their cars responsible though so it was not an entirely unpleasant experience. Telegraph wends through a hilly area. There was one hill I had to climb (right after Climbhill Rd., I kid you not) and I made it without breathing hard.

A fun downhill led to a left hand turn (always fun) into a strip mall (planned American retail blight). There I found the Grounded Coffee Shop.

I locked Little Nellie to a street sign because, this being Car Hell, there was no bike parking to be found.

Inside I found a very pleasant, kid friendly place (toys and games were placed on shelves and a Lego pit was off to one side). A young man was playing guitar and singing songs for tips.The customers ranged in age from 1 to 70. A student did homework on a laptop.

I ordered tomato soup with chicken and orzo, a banana, and a 16-ounce house coffee (dark roast from the Congo). This being the first crisp fall weekend day in these parts, the warmth of the soup and coffee alone would have made me happy, but they were both top notch. (The banana lacked a certain je ne said quoi, but it is an essential bike food.) 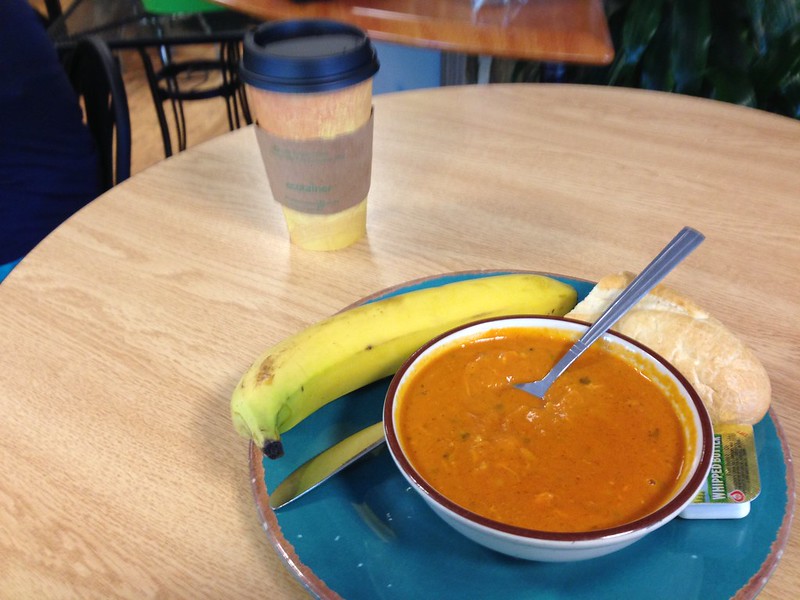 The ride home involved South Kings Highway which included one whopper of a hill. The road has a paved shoulder that comes and goes. And when it goes it just drops off in an way that would mean a trip to the ER. Way to go VDOT!

I managed the hill with the forebearance of some drivers.  When confronted with the next, steeper hill bailed out and took side streets until I popped out at US 1 and the entrance to the Hybla Valley strip mall farm. That this monstrosity was actually planned by someone is simply astounding. Fearlessly, Little Nellie took on the mass of cars and we made it through somehow. In fact, in about 5 minutes I was turning onto Parkers Lane using the turn lane and ironically not 30 yards from the spot where my wife was mowed down (actually thrown in the air) by an ex-con driving an SUV, when a driver honked at me. I wasn’t in her way. I wasn’t doing anything illegal. My offense was I was not in a car. Some people need remedial driver’s ed.

So I arrived home unscathed from my first coffeeneuring adventure. Here are some stats:

Observation: Grounded Coffee is a real find. I have $6+ left on my gift certificate and look forward to going back. I’l probably drive though because it’s located in Car Hell. 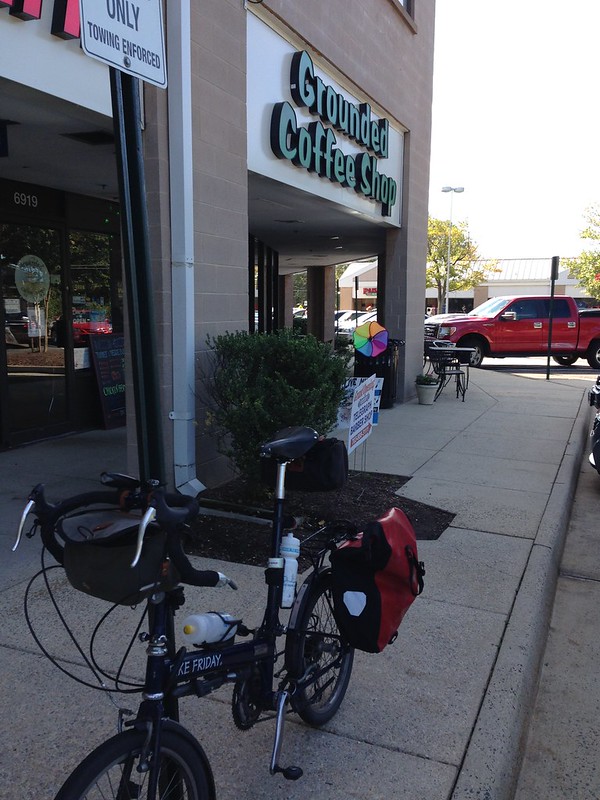 I went to a brand new doctor this week. He gave me a short test to see if I was depressed. In his notes he said I was euthymic. I went to a fancy pants (literally, it was a military school) high school with lots of vocabulary tests. FN, one of my English teachers, would have called euthymic a $1 word. Do you know what it means?

Before I reveal the answer to today’s quiz, I’ll tell you a little story. My father was an ophthalmologist. Every morning, before I dragged my lazy butt out of bed, he was at the hospital doing rounds. One morning he walked by a patient’s room. She was asleep. Not wanting to disturb her he asked a nurse exiting the room, “How’s she doing this morning?” The nurse replied, “Quite well. She’s vocalizing.”

My father asked the nurse if it was show tunes or opera. The nurse didn’t get it.

Today, was a weird day. I kept seeing Facebook messages from extremes and it was driving me. One minute a post would pop up paying tribute to my friend’s friend who died suddenly last week. The next, a picture would appear showing one of my #bikedc friends having a blast as a member of a wedding party. Sadness. Glee. Sadness. Glee.

On my ride home, I saw this scene which made my day 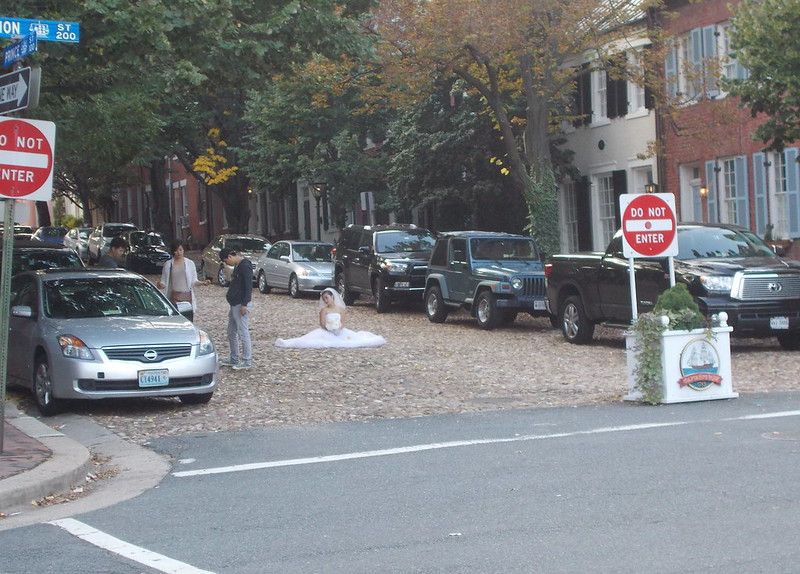 Now back to our quiz. Euthymic means that I was in a normal, run-of-the-mill good mood. Medicine would be cheaper if they used 25 cents words instead of $1.

Despite his use of arcane language, my new doctor is a real find. He is my third doctor (the other two are eye doctors) who rides a bike. He also does yoga and urged me to do a 60 to 90 minute session at least once a week. He even tried to demonstrate a balancing position before teetering into the examination table. So we’re going to get along fine.

I made a pretty good show of it in September on my three bikes. Yes, three. The Mule, my now ancient Specialized Sequoia, came out of the shed for an epic bike commute on the last Friday of the month. I finally got around to using the bike valet at Nationals Park. It was my first commute on the Mule since late May. I mostly rode Big Nellie, my Tour Easy recumbent, to work and Little Nellie, my Bike Friday New World Tourist, for events. Here’s how it stacked up.

Total miles for the month was 793.

Many thanks to all those folks who rode with me, or waved as they sped past me on my rides to work or during events. I may be fat but I’m slow. Extra thanks to Ultrarunnergirl who endured my company for nearly 150 miles. And extra, extra thanks to the 50-States rookies and the official rookie support team. And to Mike Ross and Lisa Eaker who make riding to the rest stop at their house the highlight of the ride. 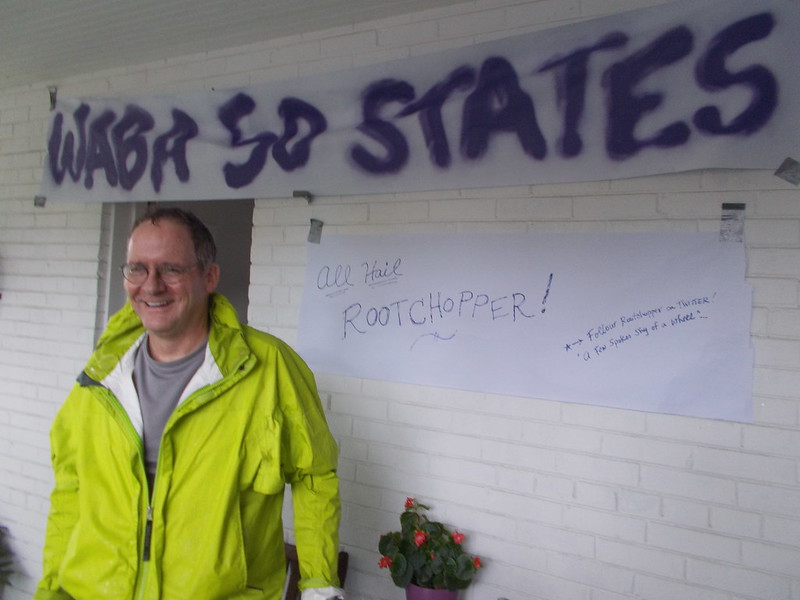 Normally, I make a big deal about taking a picture of my bike odometer when it crosses another 1,000 mile threshold. I kind of dropped the ball this week. My mind was elsewhere. The two rides to work this week have been excellent therapy (as they always are). So here it is, 44 miles after the fact. 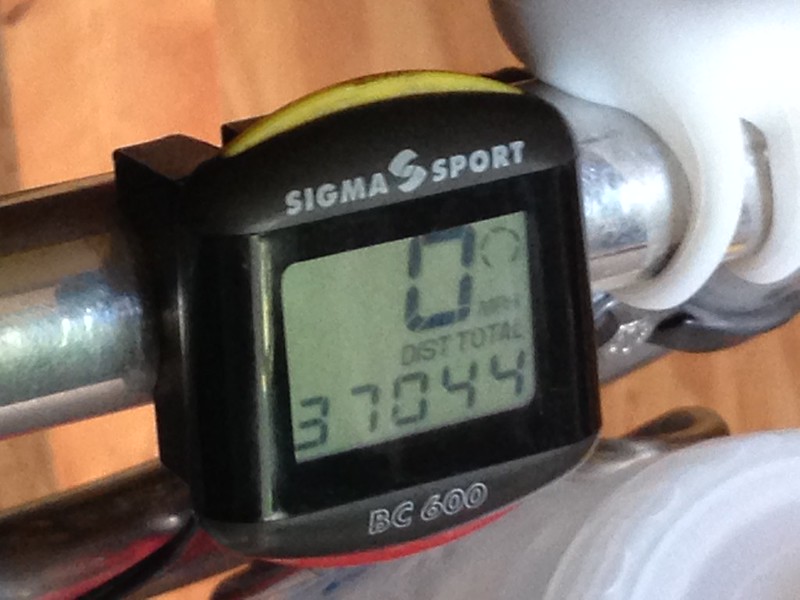