We are in the trough. The next two weeks have the least amount of daylight, then, like a overweight cargo plane, we take off ever so gradually toward springtime. Of course, the coldest days of winter remain but they are small price to pay for deliverance from the dark.

The morning dawned shrouded in fog. This always means an interesting river view. Today was no exception. The spike of the fog bank looming above the far river bank looked as if a madman had taken over, his hair pointed skyward. 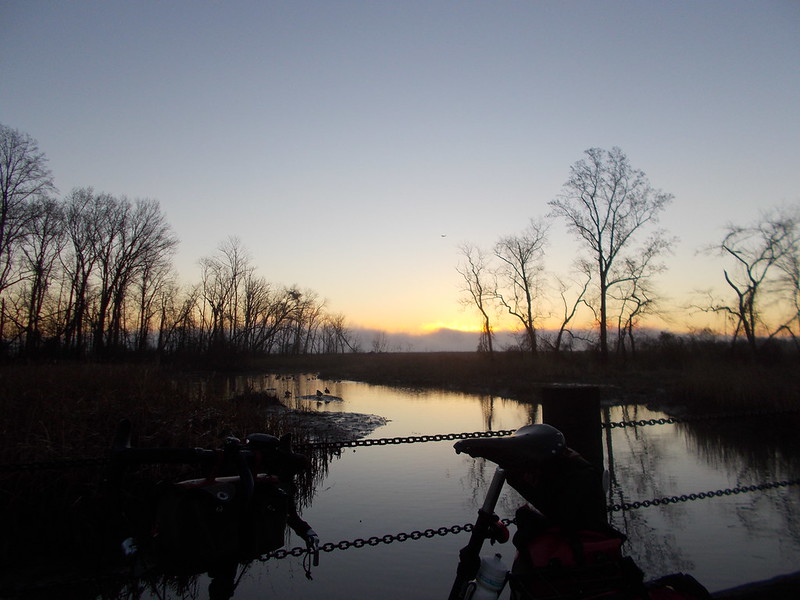 Despite the 40+ degree temperature the boardwalks on the trail were treacherously coated with a thin rime layer. In old town, Nancy “Two Sheds” Duley came rolling my way, Normally she awakens me from my commuting reverie but this day the tables were turned.

“Watch out for the ice on the boardwalks!”

When  I came to the beaver boardwalk, the one north of Old Town where a beaver builds and re-builds a dam, I saw a cyclist recovering from a crash. I glided, hands off my brakes, past him. I could see the right leg of his tights were torn. I asked if he was okay and he nodded. On I rode. A few minutes later he passed me. Even crash victims ride faster than me.

The boardwalk under the TR bridge seemed ice free by the time I made it there. I took my time to avoid an unpleasant surprise.

I learned through Twitter that Nancy had in fact been involved in a four-bike pile up on the beaver boardwalk. She was pretty composed for someone who had such a nasty ride.

During the day, my numb foot had me contemplating alternatives to the creepy neurosurgeon. Ultrarunnergirl gave me the name of a sports acupuncturist so I decided to schedule a treatment. He didn’t sound very optimistic but I figure I only have a few bucks to lose. Ultrarunnergirl says he cured her persistent plantar fasciitis with one treatment. I am not one who buys into alternative medicine. I even don’t like chiropractors, but the prospect of back surgery will have me trying just about anything. If acupuncture doesn’t work, I’ll try massage or rolfing or golfing or, maybe, bowling. Back surgery is very risky, even with the best of surgeons, and months of post surgical misery is not something I hope to repeat.

The ride home tonight was about as good as it gets for December. I had a nice gentle tailwind and the ice was gone from the trail. Even the headlights and ninjas didn’t bother me.  Pretty soon, they’ll be a memory.

2 thoughts on “Bring Me Light”