Mostly, April 2018 will fade from memory, because nobody wants to think about cold, wet, windy weather. April did have a few high points. For a start, my pulmonlogist was pleased with my recovery and backed off the prospect of leaving me on blood thinners for years or maybe even forever. She also lowered the dosage of my asthma medicine. And hopes to further lower it when I get back from my bike tour.

My bike tour planning is going along very well. I received several bike maps from the Adventure Cycling Association a few weeks ago. This allowed me to plan my trip as far as Missoula, Montana. There are numerous options for the rest of the trip to the coast. The southern route goes through central Oregon and follows the Adventure Cycling Transamerica Route. The middle route follows their Lewis and Clark route down the Columbia River gorge, through Portland, and on to the coast. Both these routes are encumbered 50 miles on road construction through the Lochsa River valley. In this corner, Felkerino, who is a man of many miles, advises that this road is awesome and contains a continuous downhill stretch of over 90 miles. In the opposite corner is Andrea, a woman of many miles too who rode the Northern Tier from Seattle east. She (and some commenters on this blog) both say the Cascades are awesome.

Two more maps arrived today from Adventure Cycling. One is for the missing segment from Missoula to the western edge of Oregon on the Lewis and Clark. The other is the segment of the Northern Tier that goes through the Cascades. To get to the start of that route, I’d need to ride a truck route along the Flathead River. I’ll plan both routes out and wait until I get out west before finalizing the way to the coast.

Getting back to my health, I did an acupuncture treatment last week that has done my left arm and shoulder a world of good. Yesterday I rode a 52-mile event ride called Breaking the Cycle. It was cold. The first 28 miles were uphill into a headwind. I rode The Mule as a test ride for the tour. It did fine except for some chain skipping on the cassette (which I had tended to today). At Friday Coffee Club last week, I bought a Brooks Flyer saddle from Felkerino. I mounted it too flat and spent much of the ride sliding my butt back to the rear of the saddle. This caused pain in my bad shoulder. Today I tipped the nose of the saddle up just a bit and my shoulder is happy again. So happy in fact that today’s visit to the gym involved two machines that I have avoided for over a month. So I cancelled tomorrow’s physical therapy session in a fit of optimism.

A word of warning about acupuncture, if you don’t want to look like a junkie, you might want to avoid acupuncture if you are on blood thinners.

Near the end of April, the sun came out. The trees and grass did their thing and we got to enjoy a shit ton of pollen. This is my car today.

There was one excellent thing that happened in April, I went to three baseball games! On my bike, of course. I missed catching a home run at the first game. The Nats lost. At the second game I nearly killed my buddy Kevin with a nacho bomb. The Nats lost.

At the third game, I avoided batted balls and gut bombs but the Nats still lost. I sense a disturbing pattern.

Despite its crummy weather, April did give me my biggest mileage month of the year. I rode 27 out of 30 days for a total of 789 miles during the month. For the year, I’ve ridden 2,743 miles. That’s a pretty decent foundation for what lies ahead.

At times, bike commuting, despite what Flogini says, is not particularly meditative. It’s quite the opposite, like giving acorns to the squirrels in my brain. Thoughts just careen about up there. So I write them down and contemplate them. Here are a few.

Somebody, somewhere decided that today is International Winter Bike to Work Day. This is the day when all the bike commuters in South America laugh at us up north. In keeping with the spirit of the day, Jack Frost returned with a vengeance. It was 13 degrees when I left home this morning. To make the ride to work more fun, there was a 10-15 mile per hour headwind.

I wore everything I could which makes for difficult pedaling.  The sunrise was stunning today but you’ll have to take my word for it because there was nothing that was going to get me to stop my bike lest I freeze in place.

At Gravelly Point the treeless field let me experience the headwind in all its winter glory. I was struggling to maintain 8 miles per hour. This 1/2 mile stretch seemed like it would take forever. Since today is Friday, I rode into DC for Friday Coffee Club. The ride across the 14th Street Bridge was actually painful. The wind was cutting through my balaclava and causing the left side of my face to sting.

I briefly considered riding north on 15th Street to be officially counted by the people from Bicycle Space who somehow became the official counters of this event. Instead I banged a left on Pennsylvania Avenue and headed straight to Swings House of Caffeine. To my surprise there were already about 10 people there. In short order, we were up to our usual 20 or so

One of the folks at my table had some interesting artwork in his cup. Check it out. 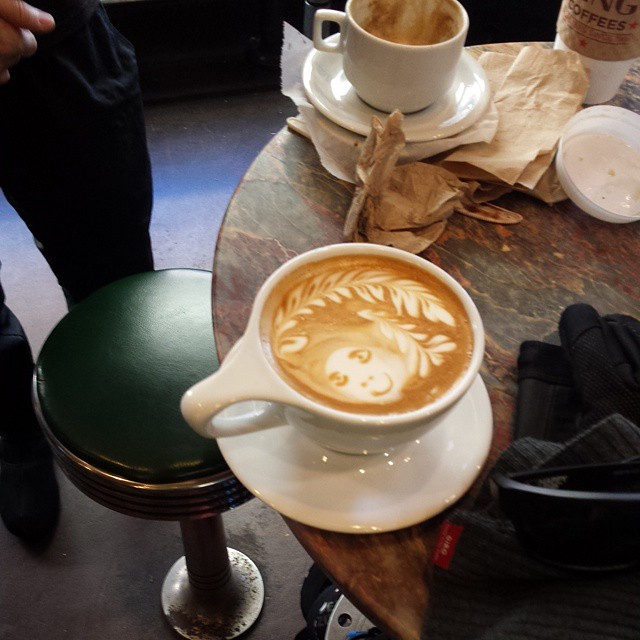 The rode from Swings to Rosslyn was pretty nasty too. I crossed back over the river but only had to stop twice for inbound bike commuters.

During the day I had an asthma attack. The worst one I have had in years. A couple of puffs from my albuterol inhaler took care of it but now I know that cold air is a trigger. Whew!

The pedaling home was much easier for a several reasons. First, I wore only three layers on my legs instead of four on the ride in. Second, the headwind was gone. And it was about ten degrees warmer. Warmth is relative.

As difficult as today was, we are fortunate that the coldest weather will not arrive until Sunday. I am thankful that I don’t have to commute in that.

Let’s end on a warm thought. In one week, pitchers and catchers report for spring training. Batter up!