What a difference a week makes. The autumn that wasn’t put on a fantastic show today. Reds and yellows and browns and crisp breezes and puffy clouds.

Lucky for me there was a bike event to get me out into the glorious outdoors. The Washington Area Bicyclist Association’s Sixth Cider Ride was today. Somehow, someway the WABA weather curse failed. A storm front moved through the area last night bringing high winds and heavy downpours. A couple of hours before the ride began, the front moved eastward. I had come prepared for rain but made a last minute decision to change from rain gear (rain jacket and long pants) to cool weather gear (shorts with long wool socks, topped off with a pull over fleece). Perfect.

I also decided to raise the saddle on Little Nellie, my Bike Friday folding travel bike. Just a tad. Even minor adjustments can have big benefits or cause big problems. I guessed right, however. I rode about 2-3 miles per hour faster today than yesterday. And my back and knees didn’t bother me at all.

The ride started in Northeast DC just before 9 a.m., and took us on a ramble along the Anacostia River trail system. The trails were covered with wet leaves making the going a bit dicey. One unfortunate rider fell and had to be taken away in an ambulance. Elizabeth, the rider immediately behind him, couldn’t stop and crashed as well suffering a big boo boo on her left thigh.

I knew several of the riders. I rode initially with Leslie but she was riding as a course marshall and had to stop and render assistance to the injured riders. Before the crash we came upon Jesse whose bike had died a hero on the trails. Somehow her rear derailler had fallen off. She was forced to take the Uber of shame. (She had her bike fixed and actually did one of the shorter versions of the ride. She persisted!)

We left the trails and stopped at Proteus Cycles in College Park to partake of warm cider and apple slices. No wait. There’s doughnuts over at the next table. Ixnay on the apple slices. Bring on the junk food!

After achieving sugar nirvana, we headed on roads through the Beltsville agriculture research area. Here my tweak to Little Nellie’ saddle height paid off. I was riding 15-20 miles per hour through fields and stands of colorful trees. Clearly, the tailwind helped a lot but I was feeling very comfortable on the bike for the first time in weeks.

Did I mention that it was gorgeous outside?

I could have stopped dozens of times to take pictures but I figured one would do the trick. Light car traffic, the low angle of light, colorful leaves everywhere, and a road with some bikes receding in the distance. Dang.

The route took up to the Patuxent Research Refuge where we turned around to fight the wind for a few miles. Then we crossed back through the agriculture complex, over a hill,  and into Greenbelt. Here we stopped in a park for warm cider and pie. I went with the apple pie because pumpkin pie makes me gag.

I stayed long enough to hear more about the crash from Elizabeth, who showed me her  bruise. (Elizabeth, Dr. Rootchopper recommends red wine. It won’t help the bruise but you won’t care.) And I got a surprise hug from Laura. I am a fan of the hammy Instagram mini-movies she makes of her bike commutes and other shenanigans.

I left the rest stop and headed back toward DC. This part of the route was different from last year so I stopped frequently to avoid getting lost. I only went about 100 yards off course all day. (I missed the cue “Take a right at the porta potties.”) We rode back to the trail system by way of the College Park Trolley Trail in Berwyn.

Just before getting back on the Anacostia Trails I passed a rest stop where people were yelling at me. I learned later they were yelling “Mead!” I was in a nice flow so I passed up the offer to wet my whistle, choosing instead to make a crossing of a busy highway behind 20 other cyclists. Within minutes I realized I had goofed. This group was doddling along and I was in the mood to motor. After a mile of hanging off the rear, I started passing people. In five minutes I was alone off the front of the group and whizzing down the trail along the river. It was beautiful. The sunlight off the water was the perfect complement to the breeze and the colors.

The change in the course also involved going south along the Anacostia on the east side of the river for about a mile then doubling back on the west side. This portion on the ride featured a strong headwind off the water and was serious work. It appears that most other riders skipped this part. I can’t blame them. Perhaps the highlight was riding past dilapidated RFK Stadium. The stadium was one of many “multiuse” stadiums built in the 1960s. I looks ripe for implosion these days.

The last few miles were across Capitol Hill and up the Metropolitan Branch Trail. I rode most of the second half of the ride much harder than the first so I my legs were ready to call it a day. And soon I arrived at the finish at the Dew Drop Inn. There, after 55 honest miles, I tossed back a couple of Raven lagers and hung out in the sun with friends on the elevated deck.

And tonight we set the clocks back one hour. The extra hour of sleep is exactly what my tired legs need.

Yesterday was the fourth annual Cider Ride, the last ride of the year for WABA, the Washington Area Bicyclist Association. The Cider Ride was the creation of Michelle Cleveland whose mission in life is to see me die of exhaustion, nasty weather, and other calamities while on a bike. I am happy to report that she failed again.

Michelle handed the reins for this ride over to Nick Russo. Every so often, a really good baseball team gets a new manager. Success is defined by not screwing a good thing up. Nick succeeded. This is partly because he went into the basement of WABA’s World Headquarters and disabled the WABA weather machine which is notorious for dialing up hurricanes, freezing rain, swamp heat, and tsunamis.

The first Cider Ride took us to the wilds of Prince Georges County, Maryland in early December. It was cold. The roads were bumpy and the drivers were somewhat impatient. One of them ran over a friend of mine. So it was decided to move the ride to Montgomery County, Maryland. This ride was colder than the previous ride plus it had wind and rain. Most people cut their rides short. I took the sag wagon. (Thanks Gina!)

Then somebody got the great idea to move the ride up a month to November and to make use of all the trails running through the Anacostia River watershed. Genius! Pretty fall foliage plus minimal car traffic made for a vastly improved experience. It also imported a tradition from WABA’s 50 States Ride: the impossibly complicated cue sheet. WABA’s  motto: “Getting lost is part of the fun!”

(Actual cue written by Michelle Cleveland: “Just after the little intersection but before the traffic light, take a right on the sidewalk. Avoid the light poles, loose concrete, and accumulated sand while you thread your way under the darkest overpass ever constructed until you take a right to take a left at a the Walker Road traffic light. May god have mercy on your soul.” Michelle’s motto: “I have nothing to offer but my own confusion.”)

Last year’s ride was mighty fine. I got lost. I had fun. And donuts. And pie. And I got a mug. This year’s ride was the same except that in the weeks before the ride, a new section of the Anacostia Riverwalk Trail opened up. So the route was revised adding 5 more miles of complexity and confusion. Brilliant!!!

With no rain, calmish winds, and temperatures holding in the 50s the ride was a pleasant meander. Riders stopped to adjust their clothing. The cool air was just that sort of in between temperature that gives autumn bike commuters fits. The discomfort was minor. The foliage was major! Peak!

We endured the blinding colors.

After riding the streets of Northeast DC we hopped on the older Anacostia trails and headed north along the river. In College Park we stopped at Proteus Bikes where hot cider and doughnuts awaited. Next, we passed through the low traffic roads of the Agricultural Research complex and the National Wildlife Federation facility near Beltsville Maryland.

We headed back south and toured Greenbelt Maryland, a planned community dating to the New Deal. At a rest stop in a Greenbelt park we inhaled pie and hot cocoa. Also, a yellowjacket stung my right middle finger. It swelled up so much it was useless against obnoxious drivers for the rest of the day. (Actually, it didn’t swell up and I abstained from using my BSL, bicyclist sign language, for the duration of the ride.)

Somewhere on the return through Riverdale Maryland I lost my cue sheet. This was Michelle’s fault because I blame her for everything. Actually, I had lost my cue sheet holder thingie and forgot to bring a binder clip. So I was pulling the cue sheet out of my vest pocket throughout the ride until I apparently missed when I went to put it back in. Derp.

I followed the slowest group that ever remained upright on bicycles to another rest stop at a bakery where I hooked up with another more faster group that I hoped was going my way. It was.

We made our way to the brand spanking new section of the Anacostia Riverwalk Trail. Bravo to WABA for adding this to the route. This trail rivals the Mount Vernon Trail and the W &OD Trail west of Leesburg for scenery. Fortunately the riders ahead of me knew where to get off the trail (Benning Road) so that we could make our way to the finish. I overheard one of them say “C Street” before they rode away. No worries. I decided to take C to the 1st Street cycletrack to the Metropolitan Branch Trail. Two riders who were unsure of the route gave me their cue sheet and it confirmed that my route exactly matched the official route.

And so we rode the last few miles together. 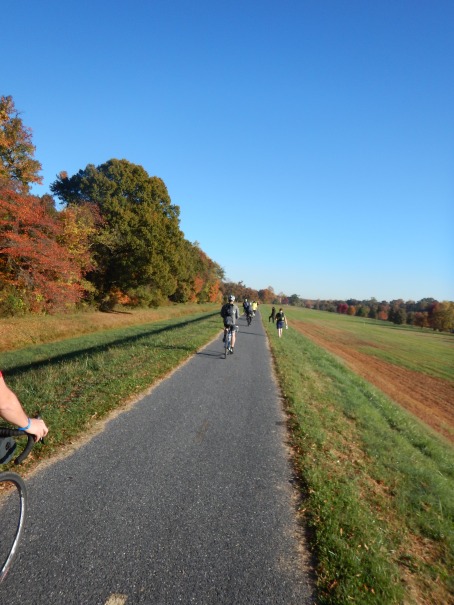 I arrived at the finish at the Dew Drop Inn rather exhausted. Here’s why:

Suffice it to say that my legs were dead throughout the ride. But I still had a good time. And I got to see several #bikedc friends during the ride and at the after party at the Dew Drop.

After four years, the Cider Ride has really hit its stride. It’s an excellent addition to the Vasa Ride in March and the 50 States Ride in September.

Many thanks to the the volunteers, the providers of snackage and cider and cocoa. Special thanks to Nick for his hard work. And to Michelle, the Ginsberg of cue sheets, who I kid relentlessly and admire intensely.