Anybody who knows me knows that I am an incredibly incompetent consumer. I buy stuff and hold onto it long after its useful life is over. Getting me to the point of buying stuff take Herculean effort.

Today I finally pulled the trigger on a new bike purchase. I drove to Bicycle Space in Adams Morgan and bought a Surly Cross Check. Unlike my other three bikes, the Cross Check is not a touring bike. It is a little lighter, a little more nimble, and a lot more responsive than The Mule or Big Nellie, which are bouth designed for touring. Little Nellie is plenty responsive but her little wheels don’t care much for maintaining a head of steam. The Cross Check does both.

I have lost track of how many people I know own Cross Checks. They all seem to like them a lot, except for Katie Lee who LOVES her Cross Check. (She doesn’t do things half way.)  Every time I see her she shows off her baby called Arrow. She’s like a rolling advert for the damned bike.

I started my bike shopping venture with the idea of buying a new touring bike for my May tour. I was fixated on a Surly Disc Trucker, a long, heavy touring bike with disc brakes. I tried one in a size that is too small and liked it. I wanted to try a bigger frame, but the shop didn’t have one.

Last week, after test riding the Cross Check at Bicycle Space, I learned that Jesse, a Friday Coffee Clubber, was selling his Surly Long Haul Trucker. It’s very similar to the Disc Trucker but with conventional rim brakes.

I test rode Jesse’s bike. It had wide tires and slightly smaller wheels than I am used to. It rode like a bus. A very, very nice bus. I was very tempted to take it off his hands, but I decided to try the Disc Trucker too.

I test rode the Disc Trucker today at Bicycle Space. It wasn’t so bus-like with its 700 wheels. And the brakes are really impressive. Neither the Disc Trucker nor the LHT like to be ridden out of the saddle though. This is not a deal killer for touring but for everyday use it’s a bit off putting. I also had trouble decided whether a new Disc Trucker was worth several hundred dollars more than Jesse’s bike.

So I test rode the Cross Check again. LIKE!

So I bought it. Workin 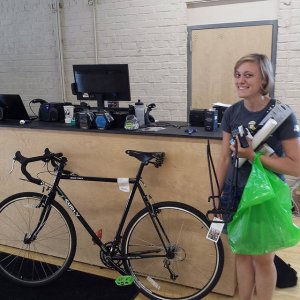 g with Rachel, one of my favorite people in @bikedc, I picked out a lightweight rear rack, a pump, some tubes, a bike computer, a multitool, and a wireless bike computer. (It’s all in her hands on the left.) Tonight I am going to buy a saddle bag from a store in Massachusets to carry my stuff.

When I brought the Cross Check home I had to take it for a spin. I couldn’t go too far from home without stuff to change a flat (which will go in the saddle bag I a 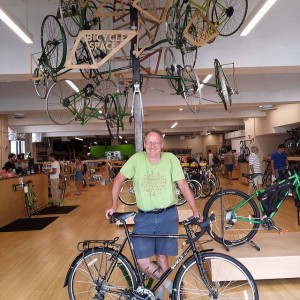 m buying). It was a fun 5 mile romp around the neighborhood. It’s going to take some tweaking to get the bike and my body to play nice together but I can’t wait to get it out on the road. This is the bike I want to take out on the weekends or on event rides without a lot of crap on it weighing me down. It’s going to get a lot of us.

Many thanks to Rachel for spending so much time with me getting this done. Bicycle Space has a huge inventory of bikes and a gorgeous new store (actually two but I’ve only been to one) which makes it a great place to shop. It also has a large complement of very helpful, knowledgeable, and personable employees which for some reason in bike shop world is unusual.

Oh, and one other thing. Bicycle Space gives a discount on bikes and accessories to WABA members. The discounts I received today paid for my membership for many years to come.

I keep calling the bike “it” because it does not yet have a name. I have five names in mind so far. I won’t tell them. Feel free to offer suggestions of your own in the comments.

I saw this bike in Rosslyn today as I was going to lunch. Whoever is riding this machine has travelling light down to a science. Handlebar bag and seat bag and that’s IT! Note the absence of a water bottle is made up for by the canteen strapped to the front of the handlebar bag. I would venture to guess that I carry more stuff to and from work than this cyclists carries wherever he may be going. 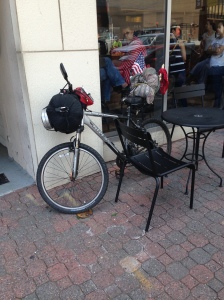 The weather in DC could not have been better for a late-winter bike ride. It was well over 60 degrees for most of the day. It is also the last day of spring break for my two kids who are home from college. We had planned to give our nine-year-old Accord to our daughter but that plan fell apart when we learned that the car needs $3,000 in repairs, mostly to its steering. So we spent the day test driving cars. We drove a Honda Fit which seemed okay. Then a Civic which we all liked. Next up was a Subaru Impreza which we all really liked. When school is over we plan on driving a couple more cars before making our decision. We picked up a brochure from the Subaru dealer and saw these interesting pictures 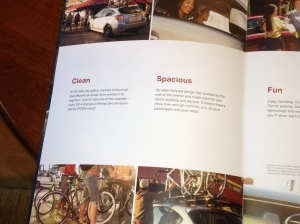 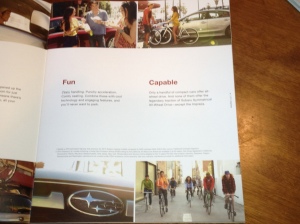 Can you imaging a Specialized or Trek bicycle brochure with pictures of people driving Subarus instead of riding bikes? Unbeknownst to Subaru, my daughter, like many new drivers, thinks bicycle are lame. We liked the car because it was fun to drive, well-designed and priced right.

If you look at the picture at the top of my blog, you’ll see The Mule, my Specialized Sequoia bicycle. The saddle is a Brooks Flyer, a leather saddle that costs over $100.  Look at how the saddle sags in the middle. It’s not supposed to do that. Underneath the nose of the saddle is a tensioning bolt that you can use to tighten the leather and remove the sag. You can use it, if it isn’t broken. Mine was.

I finally decided to replace the saddle. My new saddle is another Flyer and it works fine. On a whim I search the Interwebs to see if I could get my old saddle repaired. I found this place in Seattle and decided to give them a try. I mailed them my saddle and in a couple of days I received an email from them saying it was done. I sent them the money for the repair and return shipping and a few days later it arrived.

Other than the fact that the leather is no longer shiny like a new saddle, I can hardly tell the difference between the two. The leather on the old saddle is softer to the touch and since comfort is king, it went back on the bike. I’ll ride the bike and see how the repaired saddle holds up.

The repair shop does other repairs to Brooks saddles. Sadly if the leather is torn you’re out of luck. Also, there is the possibility that the leather will tear during the repair. Caveat sella.

By the way, I now have two extra Brooks saddles. It would be a shame for them to go to waste. There is only one thing to do….buy two new bikes. 🙂

I hadn’t planned on riding at all today but the weather was so nice, I couldn’t help myself. I took Big Nellie, my Tour East recumbent, down to Mount Vernon with a quick loop around Fort Hunt Park. In my travels I got a good bead on the Fort Hunt bald eagle nest. It’s easily the biggest one around.

On the way back home, I stopped to take a picture. 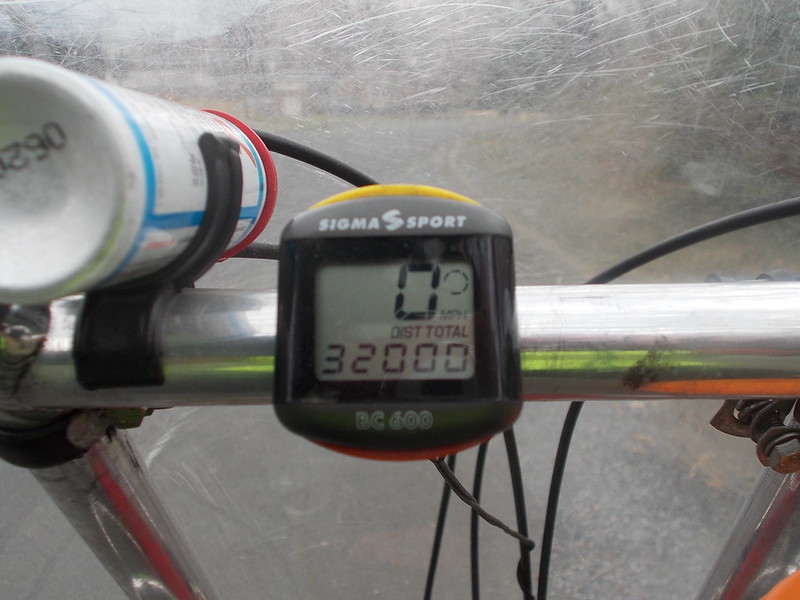 Big Nellie finally made it. Now she’s only 400 or so miles behind The Mule, my Specialized Sequoia.