Well, once again I wasted untold hours posting this inane blog. In for a penny, in for a pound. So here goes with the pictures of 2019. With one, regrettably from a few years ago.

Yetserday, I rode the Great Pumpkin Ride in Fauquier County, Virginia with my friend Emilia. This was our fourth ride together. Our first ride together was the 2014 50 States Ride. She had a rough time. We did it again in 2017 and this time I had a rough time and she, despite missing several climbing gears, flew up the hills. She weighs about half what I do so it was reasonable to assume would bury my sorry old ass on a sod farm in the hilly Virginia Piedmont.

Lucky for me, the last ride she did was the New York City Century back in early September. Unlike me she skipped breakfast. So on an empty stomach and with legs that hadn’t spun a pedal in seven weeks, she insisted on riding the long, 67-mile route yesterday. She’s pretty tough.

We lined up next to the red caboose at the start/finish line. Soon we were off down a rail trail then onto country roads where we were treated to rolling hills, 60 degrees, calm winds, cloudy skies, and the occasional sprinkle as we cruised through the rolling terrain at between 12 and 13 miles per hour. The foliage was close to peak and every so often we oohed and aahed at natures show. The lifestock in the fields seemed utterly (pun intended) uninterested in our passing. I explained that during my ride across the northern plains last year, I could get cattle and horses to stampede. Their Virginia cousins were having nothing of it.

The police warned us not to ride side by side so Emilia followed close behind me for most of the ride. She rides a bit closer to the edge of the road than I prefer so there was little chance that we’d overlap wheels.

Emilia’s native language is Spanish. I take advantage by quizzing her about useful phrases that I typically forget. Mostly we just rode and listened to the voices inside our heads. It’s nice to have a riding partner who appreciates that.

Thanks to her layoff, we rode at exactly the same pace for nearly the entire ride. She’s a vegetarian and needed no prodding when we came to the first rest stop 19 miles into the ride. There she gorged herself on a thin slice of cinnamon bread and half of a banana. I noticed she had barely touched her water bottle. I thought “no bueno” but she was perfectly happy with her food and water intake.

We rode another 22 hilly miles before finding the next rest stop.  She was laboring a bit at this point so she gorged herself with a thin slice of pumpkin pie and a wee bag of potato chips. Then off we went.

The next thirteen miles were a bit hillier. I noticed at mile 50 she was laboring up a hill. Her thigh muscles were cramping. Her water bottle remained nearly untouched. No bueno. We slowed a bit and forged ahead. At an intersection with a busy highway she had trouble unclipping from her pedals and wobbled into the cross road. Fortunately no cars were coming but she knew that the little incident could have been bad news. I could see on her face that the layoff since early September was taking its toll. She was pretty tired.

The route to the final rest stop is out-and-back for about 2 1/2 miles. We saw riders returning from the rest stop turning toward the finish. Emilia did not have a cue sheet in front of her and got rather animated about following them. I briefly considered skipping the rest stop. That would have risked seeing her bonk all the way to the finish so I explained we needed to get some food in her and forged ahead to the rest stop at the Old Bust Head brewery.

Once there, she had pie, three small cheese quesadillas, a small portion of tater tots, a cup of pumpkin soup, and two cups of Gatorade. Smiles.

Crisis averted. As we rode I counted down the next few miles.

Only tell me the single digits.

How do you say nine in Spanish?

She fell back on a hill, caught up, then fell back again.

Are we at seven?

A few more hills and we found ourselves on the rail trail back into town. It always seems longer that it actually is. Emilia started looking for the caboose.

And there it was after 67 hilly miles.

We hope to ride again next Saturday at the shorter and flatter Cider Ride in DC. There will be no caboose but the donuts and cider and pie will make up for it.

On alternate Thursdays my wife and I go out for breakfast. Today we chose the Crystal City branch of a Northern Virginia institution, Bob and Edith’s Diner. As is usually the case, I had mucho cups of coffee with my meal.

What I drank: one gallon of their drip coffee (not half bad I must say)

Ride Details: The forecast was for strong winds out of the WNW. With temperatures in the low 50s, I dressed in layers. Long rain (actually wind) pants, a short sleeve base layer, a t-shirt, a wind breaker jacket, a buff, and a headsweat. I was ready to put on long sleeve gloves over my mesh biking gloves. For the first seven miles I baked because the winds were moderate and at my back. Then, the wind changed. I got hammered. My clothing fit the bill. On the way home, I rode over the Memorial Bridge into DC and let the wind push me along Ohio Drive where I briefly chatted with #bikedc’s Randomduck (a.k.a Rudi). On the way hope I stopped to admire this just north of Old Town on the Mount Vernon Trail.

After an early morning recon ride in the car with Mrs. Rootchopper, I went back on my bike to take some pictures of the local fall foliage. Fort Hunt Park has several maples that put on a show for about a week every autumn.

And with the river, the foliage, and the angled sunlight, the Mount Vernon trail is simply beautiful.

I wanted to go for a hike today. Unfortunately, 150+ miles of bike commuting put the kabosh on any hopes for a long excursion. I needed to do some errands anyway. Why not jump in the car and have a miserable time? No? Well,  I needed to break in my new shoes so I decided to hoof it to the barber shop. It was perfect weather for this sort of thing. The shoes took a little getting used to but they are a vast improvement over my other footware.

The barber did his thing, all the while telling me about his airship fetish. He’s going to decorate a Christmas tree with airship decorations. Let’s hope it doesn’t go all Lakehurst on him. 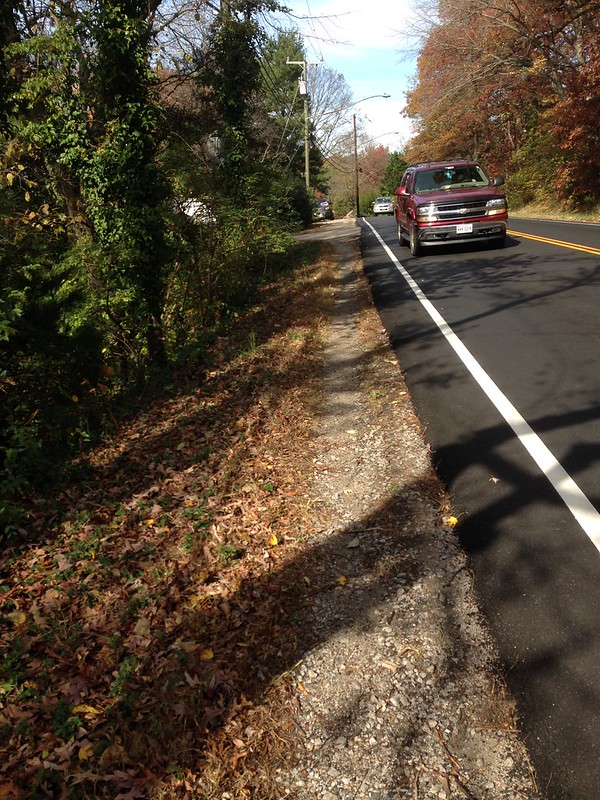 From the barber shop I decided to truck on over to pedestrian hostile US 1 to buy a new coffeemaker. My old one had sprung a leak about a week ago. So I made my way north-ish on Fort Hunt Road. The sidewalk disappeared leaving me facing oncoming cars. Oh, joy.

After a couple of blocks though a side path appeared. This is what Fairfax County calls a trail. It is asphalt and tree routes. A total mess. It was better than walking on the unpaved shoulder of the road. 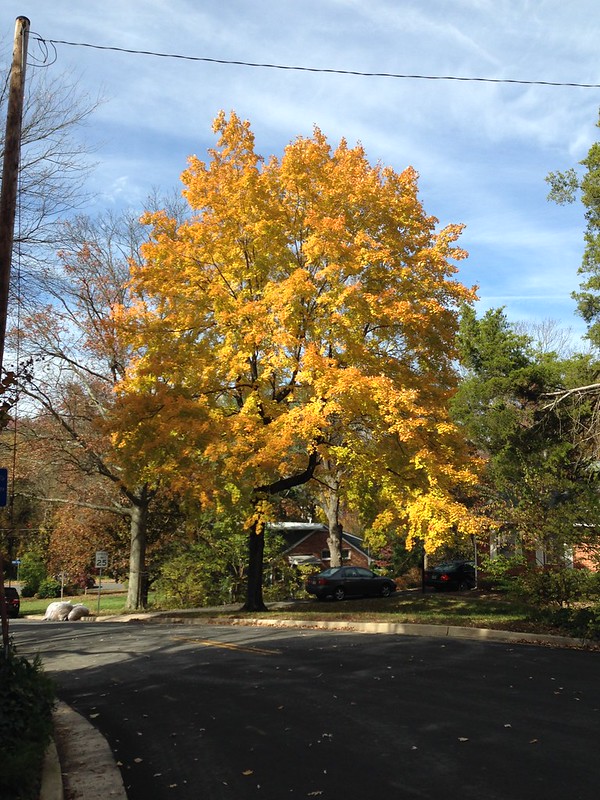 If you’re going to take your life into your hands you can at least admire some pretty fall foliage. The DC area is just past peak foliage but there is still much to ooh and aah at. Lucky for me there is a sidewalk on at least one side of Sherwood Hall Lane. I used it. After about a mile, I made it to a cross walk only a block from where my wife was run over in 2010. After looking both ways, I started crossing. I got about half way across when an approaching motorist honked at me. I stopped and turned at him and mouthed saucy epithets.

Safely across the street I made my way closer to US 1. About a block away, the concrete sidewalk gave way to crappy asphalt on dirt. Why can’t one of the wealthiest suburb in the US build proper sidewalks? 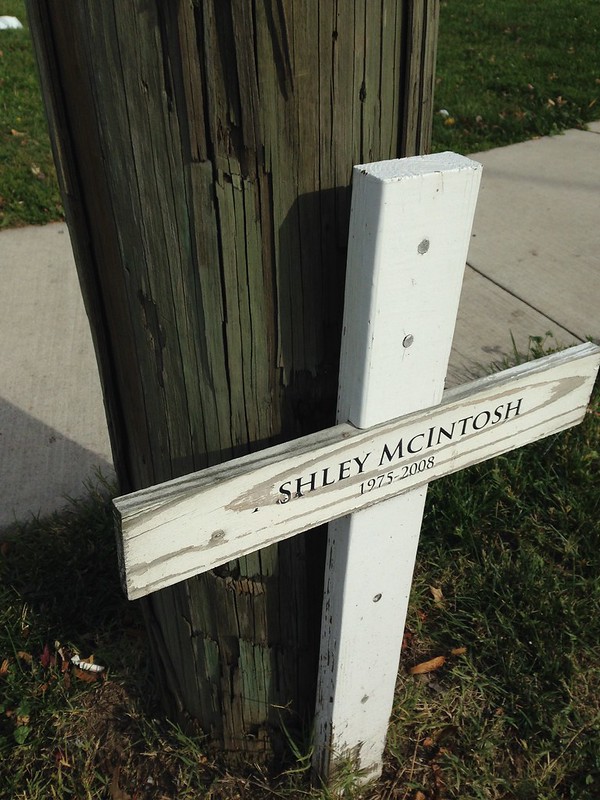 To cross US 1 in a crosswalk and make it to a continuous sidewalk I had to take a left through a crosswalk on my sidestreet, take another left to use the crosswalk to traverse US 1, take ANOTHER left to cross the re-cross the sidestreet to get to the continuation of the sidewalk. Along the way I saw a memorial for a pedestrian who was killed (by a Fairfax County police officer driving a police car, no less). When I got across US 1 I gave up on the 3rd crosswalk and just used the street. There you have it. Someone gets killed and they still can lift a finger to make an intersection safe for pedestrians.

I made may way through the parking lots to the store and bought my coffee maker. I took a different route back. Along the way I encountered an intersection that had been recently stiped and paved. Not a single cross walk to be seen. HOW HARD IS IT, VDOT? 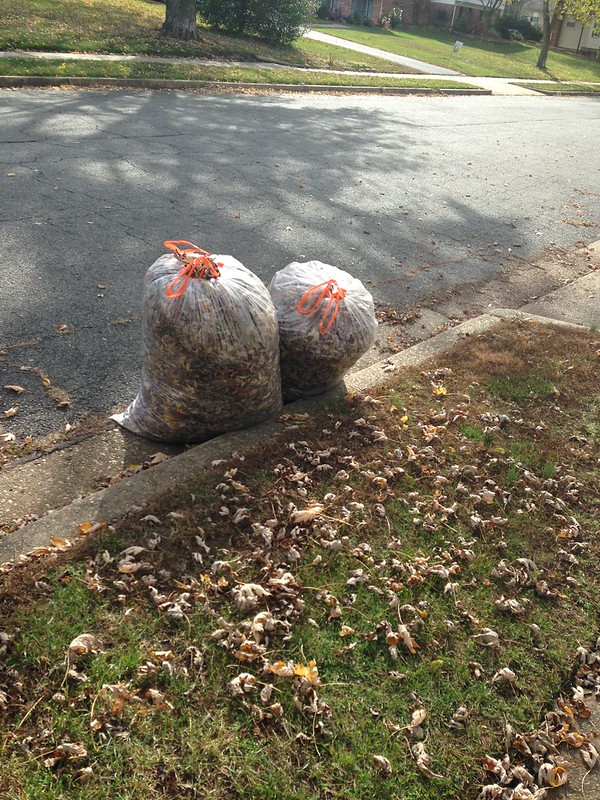 I made it home and saw that Mrs. Rootchopper had come outside to do battle with the yard. She seems to like raking leaves. There are plenty more so come on down and help her out. I am sure you’ll have a blast. (In the division on labor at the Rootchopper Institute, I do lawns and snow shoveling.)

So I walked about 5 miles. The verdict on my shoes is thumbs up. They aren’t perfect but they are quite a bit more comfy that my old Dunham boots. I hope to give them another go on Tuesday or maybe next weekend. Oh, and the coffeemaker does the job. 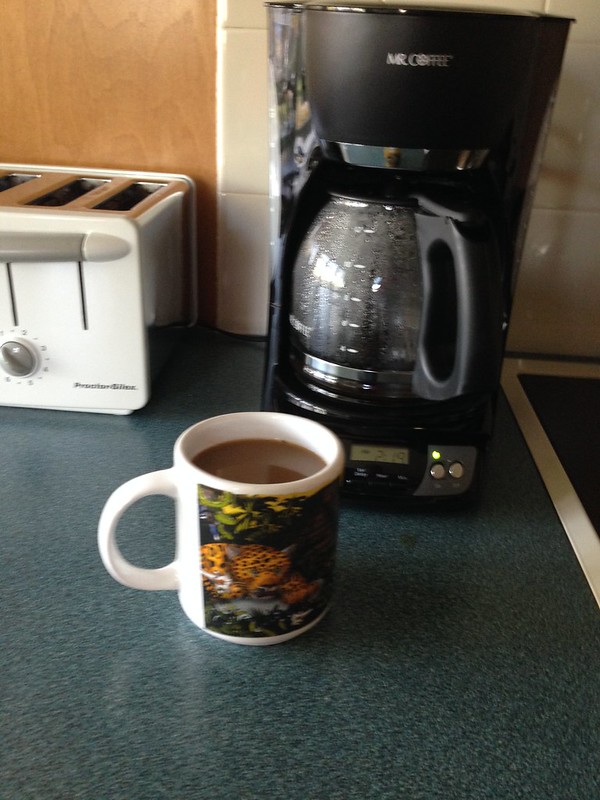