So Nick and Amy were at the hostel. They are from England and have embarked on an honest to god 50 states bike tour. They have 49 to go. Godspeed. 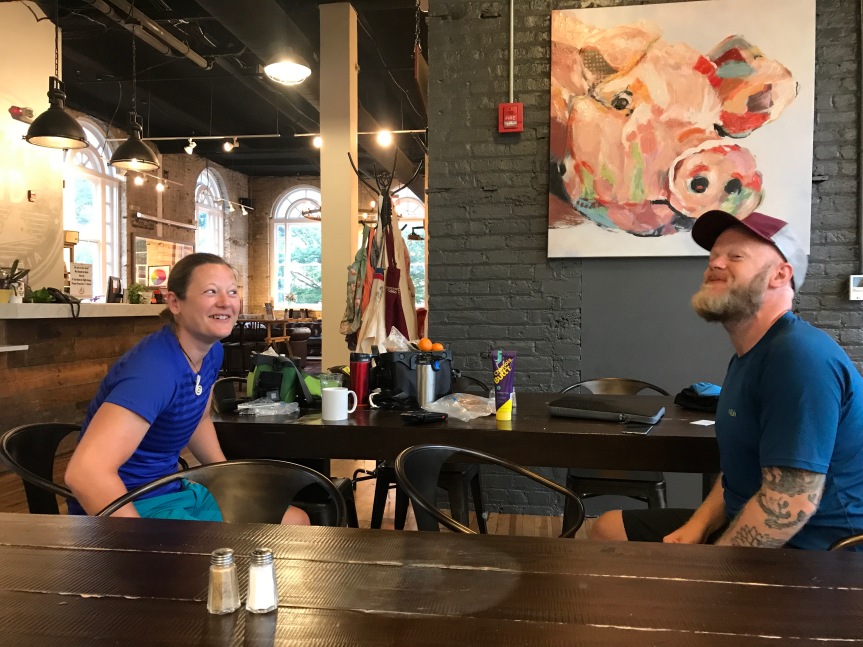 Nick and a cool Bhuddist tattoo on his calf.

I went out to dinner at Perlys, a bona fide Jewish deli. The beef hot dog was huge, the bun was beyond awesone, and the everything chips were so good I ordered a second helping. (Everything means onion, sesame seeds, poppy seeds, salt, etc. Like an everything bagel.) And they had draft beer and ale (and cider and wine and all the things). I had a lager and a red ale. Burp.

Back at the hostel a little boy named Logan was acting like a dog. He had curly brown hair and was impossibly cute. Four Japanese young women were playing pool incompetently. A Japanese guy tried mansplaining it to them. He was ineffective.

Breakfast was free. After stuffing myself I made myself a double decker PB and J just in case. Nick, Amy, and I agreed that we must stop periodically and eat. That was my plan.

Our the door and past the state capital, I wandered a bit until I found the Capital Trail. It’s a paved trail that goes from Richmond to Jamestown and the ferry across the James River.

Services were lacking so I rode about 30 miles until I came to Cul’s Courthouse Grill. It was 11 am so time for second breakfast like a good hobbit. Another club sandwich and ice water. (Lord, the beers on tap were tempting.)

On impulse I bought a big chocolate chip cookie, just in case.


The trail is bordered by a two lane highway which is a bit of a buzz kill. Bandit campers, however, would have a field day. Lots of opportunities to sneak off into the woods.

At one point I spooked a very large bird of prey in the tall grass next to the trail. It burst into the air and careened away from me into the woods. Scared the crap out of me.

The trail passes several plantations which gets kind of depressing. History buffs will take forever riding the trail because there are historic markers, sometimes in clusters, from end to end. This area is thick with colonial, Revolutionary War, War of 1812, and Civil War history. And President Tyler lived here. (I don’t know much about him either.)

I stopped at a store and bought some sports drink, a banana, and chewy candy. Just in case.

I didn’t visit Jamestown, because I already went with my family years ago. (It’s well worth the time by the way.)

I just missed a ferry and waited 20 minutes. The chat with a 60 something guy in a Miata was fun. The ride itself took about 15 minutes. The river was calm and the weather was a comfortable 79 degrees. Twas a lovely cruise.

A few hills came next, but my granny gear got the job done.

Most of the farm fields so far had been filled with either soy beans or desicated corn stalks. Big farm machinery was chopping it down and spitting the ground up remains into trucks.

On the south side of the James I think the soy turned to peanuts. (I am a city boy.) And I rode by field of cotton for the first time in my life. I can’t imagine what picking cotton in southern heat and humidity must have been like.

I reached my scheduled stop, a state campground, at about 2:30. I had ridden 60 miles but I had fresh legs and oodles of food and drink so I decided to push on. At Bacons Castle I didn’t see any bacon or a castle so I bought a banana and a bottle of water and forged ahead.

Cotton, peanuts, corn and level ground. It never got oppressive hot or humid and a gentle breeze seemed to come from every direction.

The roads were narrow. Local drivers don’t get the three-foot passing rule so I had a few close encounters with big metal things. The roads were mostly chip seal so the tires on the passing vehicles made much more noise than usual.

A UPS van driver pulled up next to me. His right hand door was open.

Where’re you coming from?

Have a great trip!

And he drove off.

I arrived arrived at the turnoff to the next campground at 85 miles near Athens town of Isle of Wight. It was about 4:30. My legs were fresh, I had consumed my sports drink but still had my PB and J and the cookie. No fear! On to Suffolk.

The next 5 miles were more of the same. I was starting to get tired so I ate the PB and J. Rebirth!

I arrived in Suffolk Va and called the campground. No tent spaces, only cabins for $70. I said ” No Way so hey” and asked the Google for motels. After some pathetic wandering I asked the Google for directions. The route took me through a poor section of town. Depressing.

I arrived at the Super 8. It’s not posh but it’s cheap and the room isn’t half bad.

As I typed this my legs have been cramping. Could be an interesting night.

I thought I messed up my day by day plan but it was just the fatigue of the end of the day getting to my head. I am now about 1/2 day ahead of schedule.

My maps indicate that there are few services after 30 miles tomorrow. So I may be doing about 90 miles.

About a year ago I was admonished by a friend for sounding wishy washy regarding my 2015 vacation plans. “Stop planning. All we have is today” was her way of saying don’t plan, DO!  Irony alert: in January 2014 she told me of her plans to obtain certification to teach in DC schools and to open a business. She followed through on none of it, eventually leaving town. Even so, she had a point.

I suck at advance planning. Somehow I managed to do a bike tour, a non-bike trip around the world, nearly a dozen day hikes, half a dozen bicycling events, and take in a bunch of Nationals games. So with that in mind I began thinking about things to do in 2016.

I anticipate one non-biking vacation (to Sweden and thereabouts) to visit my daughter.  (A return to Thailand in the dry season would be nice but I can’t face the 18 hours of flying right now. Maybe 2017.) That will leave plenty of vacation time. So here are some ideas I am tossing around in my head.

Hiking: there are still many, many hikes to do in the Shenandoah National Park. Also, I have barely scratched the surface of hiking in nearby Maryland and Pennsylvania along the Appalachian Trail. One possibility is to gear up and do some overnights. I have never done this and it would be an interesting extension of my day hikes (not to mention save on driving home after a day’s worth of hiking).

Biking Events: WABA swears that it’s going to offer a century ride this year.  If it works into my schedule, I’ll definitely do it. Then there are the usual events: Vasa, Cider, 50 States, Backroads, and Great Pumpkin. I’ve done all of these several times, but the Backroads course was moved to West Virginia this year. I was in Australia and missed it. I can’t wait to do the new version. Two more that I keep threatening to do are RAGBRAI and the Five Boro Ride in New York City. Both of them are cattle drives. Both offer logistical challenges. Some of what follows are a lot easier to do.

Bike Trails: There are all kinds of cool trails around here that I haven’t ridden. Here’s a list of Virginia trails:

In Pennsylvania the Pine Creek Rail Trail runs 63 miles through the Grand Canyon of the East. Looks like a good overnight camping round trip to me.

Bike Tours: Right now I have eight possibilities on my list. All in the Eastern U.S.

In the increasingly likely (yet still somewhat improbable) possibility that I retire there is this:

Once I find out when the WABA Century and the Sweden trip will happen, I’ll pick two of the tours and as many events and hikes as my aging bones can handle.

An American living abroad in Germany

An American living abroad in Germany